Social media posts can make or break businesses, depending on how they choose to conduct themselves and even who they hire to write the posts. Businesses make mistakes in social media every day, but there are also several businesses out there who are, for lack of a better word, winning at social media.

From a follower’s perspective, consider what kinds of posts make you want to hit that “like” button, or even the “retweet” or “share” buttons. Did the tweet make you laugh? Did it make you tear up a little bit? Or did it make you sit there for a second and think, “What the hell?” Whichever one it is, businesses who create tweets and other social media posts that create these feelings tend to gain more followers than their competitors.

The best brands in social media tend to appeal to consumers’ interests and needs. For some, like Denny’s, it doesn’t even matter if the tweet is about the company’s products. The majority of the brands on this list are winning at social media because they are weird, funny, or even inspirational (gotta love some #likeagirl posts from Always).

Check out these 15 businesses that are better at social media than their competitors.

where did he buy pancake shoeshttps://t.co/vN4fFi1SoN

Let’s face it, Denny’s certainly embraces weirdness with its posts about pancake shoes, sporks, and asking followers how they like their buns.

can’t decide whether to use a spoon or a fork? sounds like you’ve come to a…

spork in the road

Denny’s social media posts are silly, creative, and the masterminds behind the accounts aren’t afraid to use dad jokes. The company’s strategy is working too since the restaurant chain’s Twitter account has close to 300k followers. Denny’s social media presence is fun, silly, and doesn’t sound like there’s any kind of corporate planning involved. This combination earns the company points from the younger generation who are more likely to use social media than their parents or grandparents.

When it comes to cookies, Oreo takes top honors in the social media world. According to the cookie’s Twitter account, it is, “Your favorite cookie, filling your world with Wonder 140 characters at a time.” In addition to whoever creates the tweets for Oreo, the brand must have an entire crew of designers on standby to churn out content for its social sites.

.@JackBox Keep your friends close…and those who bring you #Oreo Shakes closer.

The brand is also constantly engaging with followers who tweet at them, often replying with funny or cute messages. It even responds to other brands that tweet at it, like when Dairy Queen introduced a new Blizzard for November 2015:

.@DairyQueen Now that's a blizzard we wouldn't mind getting caught in.

He will seduce you with his awkwardness. #Parenthood Season 6https://t.co/MWBEj4TXWm

Netflix has a plethora of data on its users, which probably helps it understand its social audience as well. The streaming site loves to poke fun at the characters on their TV shows, quote one of their comedies, or retweet comments from actors and streamers alike. Most of their social media posts include short clips or GIFs of the shows they stream, which provide great reminders of their content.

Retweet if the whole world seems to stop when you hold your #LittleMiracle in your arms. pic.twitter.com/54wuuqpu2a

Pamper’ tweets tend to be more inspiring than funny, but its tweets create a community to market its product and help provide advice to new parents. Pampers’ community includes soon-to-be parents and veteran parents who come together to share advice, memories, and feelings surrounding their kids. This strategy is working well for Pampers since the brand has almost 150k followers on Twitter.

Charmin’s #TweetFromTheSeat campaign has helped the toilet paper manufacturer liven up a product that isn’t always fun to market. However, Charmin is easily blowing away its competitors with social media engagement and campaigns, including its bear family, which it even uses as a reason for products that get shipped out when they probably shouldn’t have.

Oops! Sorry @jasonpauloliver looks like baby bear got on the production floor, thanks for letting us know. Mind calling us 1-855-236-3353?

Charmin encourages Twitter users to share photos and send them messages when they’re on the seat. The company’s social media employees help spread awareness by doing it themselves.

If you look really closely, you’ll realize this is a painting. pic.twitter.com/gkCyizoIqi

GrubHub enjoys a mix of food photos and tweets showing what customers are ordering where. The website sure knows how to get customers salivating over its food, or even laughing about a shared love of tacos.

Let nothing come between you and your friends—except tacos. pic.twitter.com/Po6Ig86iKf

We are committed to making social media a more positive place for #GrowingUpAGirl. pic.twitter.com/vlrEZ3cDzP

Like Pampers, Dove’s brand on social media is less hilarious and more inspirational. The company’s goal for social media is to create content aimed at making women feel good about themselves. The company’s Twitter bio reads, “Dove is committed to helping women realize their beauty potential by creating products that deliver real care.”

But our positive voices are LOUDER than the negative voices.

Messages like this one are interspersed with tweets about products like Dove’s deodorant and hair care lines. The company’s #SpeakBeautiful campaign is aimed at telling women that their hair is gorgeous no matter what style it is in or what it looks like. Along with products for good, Dove tries to change the messages behind tweets on the social network site with messages like this:

Women are most likely to Tweet negatively between 9am-12pm. #SpeakBeautiful today & help us change this! pic.twitter.com/A6FnZ6R62q

GoPro has a fairly easy marketing strategy on Twitter and other social media sites. The camera maker features photos and video taken using the GoPro cameras as a way to both inspire its followers and showcase its product. The company has a photo of the day contest and often retweets photos taken by GoPro users around the world.

Photo of the Day! #MaytheFourth be with you! Matthew Burdzy proves even the Empire needs some R&R. #GoPro #StarWars pic.twitter.com/0bBqaIqHia

The Mars Curiosity rover isn’t really a business, but NASA’s Jet Propulsion Laboratory has certainly helped create a successful online presence for NASA and the work that it does in space. The Mars rover offers sassy, first-person updates on its current position on the red planet, as well as experiments it is running. It also posts selfies every now and then.

No shame in my #selfie game. These pics help my team see the state of hardware over time. http://t.co/kQmYm7dUJ9 pic.twitter.com/CtSQODPofA

The rover’s Twitter account has more than 2.2 million followers, showing just how much people love science and space.

When you're visiting your ❤ & can't get through TSA bc you're more than 3.4 oz. #SnowmanDatingProblems #LDR #baggage pic.twitter.com/6tXaU7bttk

Not only does JetBlue Airways have great customer service, it also has a fantastic social media game. The airline is a great example of a brand that sprinkles a bit of humor in beside its advertising and other posts. Not everything the company posts is hilarious, but it is all informative, whether it is about the company, things to do in each destination, or pilot Adrian Eichorn, who is traveling around the world in his own plane.

Pilot Adrian Eichorn is flying around the world on his own plane #N1733G. Follow his trip @ https://t.co/JQNkg1H5MVhttps://t.co/yvQnKPU1DJ

JetBlue also wins in interacting with customers. Check out the following Twitter convo. 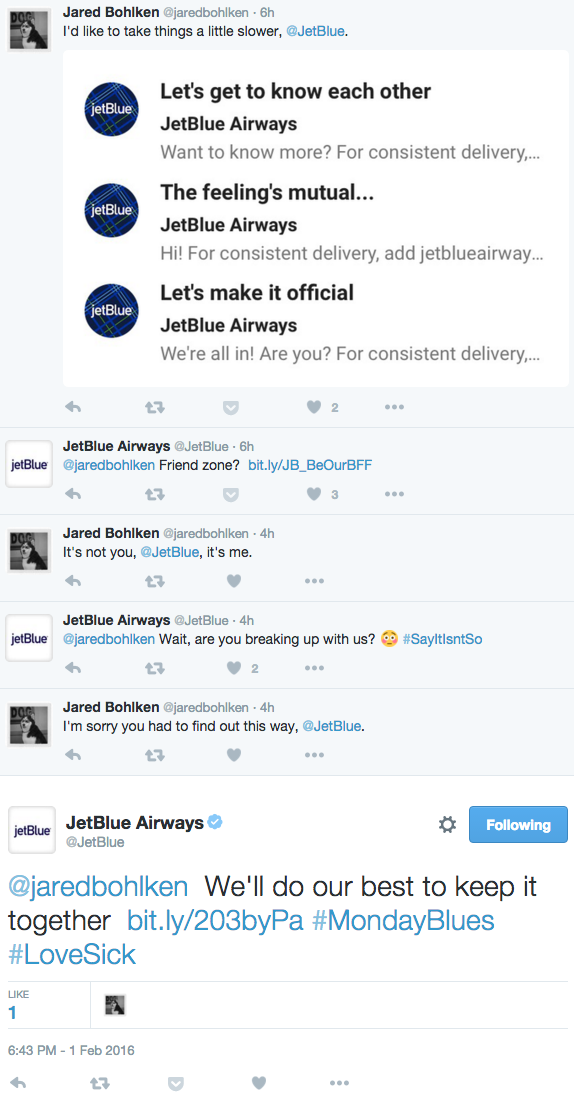 Taco Bell’s social media plan ranks up with Denny’s, though admittedly sometimes it gets even weirder.

Today only: turn yourself into a taco using our @Snapchat lens. Because Cinco de Mayo. pic.twitter.com/P4KwLdFNFZ

Along with Snapchat filters, Taco Bell is known for its witty one-liners and clever photo updates, as well as its interaction with other brands.

If wanting Taco Bell is wrong, I don't want to be right.

Girls can do anything and be anything #LikeAGirl! pic.twitter.com/nnE5EF8WuG

Always is another brand that built a community and campaign on showing girls how strong they can be. The bran’s #LikeAGirl campaign focuses on building the confidence of young girls and teens who struggle to be self confident after they hit puberty.

You do so many amazing things every single day! #LikeAGirl #MondayMotivationhttps://t.co/MvM4w2ZaeM

The campaign takes the old phrase “like a girl,” which is usually said negatively, and turns it into something a lot more positive.

#MondayMotivation Bring on May! Go out there and do amazing things #LikeAGirl #YouGotThis pic.twitter.com/a21uQqOlhZ

This tweet is the result of a cat walking across a keyboard and a huge stroke of luck.

The stuff fries dream about. pic.twitter.com/8F3wNcpHV9

Wendy’s key to social media success has been funny, simple, and somewhat mindless content. Like some of the other companies on this list, Wendy’s loves weird.

The company also expertly shows off its food, whether it’s old favorites like a hamburger, or their new spicy chicken.

Care to take a new Dave's Single, Double, or Triple off our hands? This tray is heavy. pic.twitter.com/3r12BlxXVP

All the Skittles and a chandelier to swing from. Is my #CincodeMayo party missing anything? pic.twitter.com/79SYfIiqMU

Skittles also has a fantastic marketing strategy, bringing its “taste the rainbow” campaign to social media. The brand’s Twitter bio reads, “The Official Tweeter of Awesomeness. Follow the Rainbow. Taste the Rainbow.”

Don't think I can steer through those Skittles? Never tell me the odds. #MayThe4th pic.twitter.com/49EFh2vZ7i

Along with keeping track of holidays and Star Wars Day, Skittles also has fantastic dreams about the future.

Melissa Stusinksi is a professional journalist. She has written for some of the biggest news websites in the United States. She loves spending time outdoors and reading books in her spare time. She can be reached at [email protected] or (929) 265-0240.