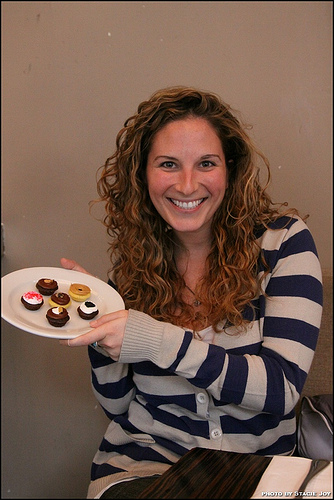 Baked by Melissa, a nascent New York cupcake store run and masterminded by 25-year-old Melissa Bushell, is evidence that combining a trend with a good price point results in a winning recipe. From The Feedbag:

(My sister and I)…strolled over to Soho and saw a lineup…(of) female tourists and Sex And The City- era locals…in front of a little outpost next to Cafe Bari. The sign said “Baked By Melissa”, a two week old cupcake shop with a twist. The menu photos made these “stuffed cupcakes” look larger than life. We thought, “what a bargain! Only $1 each”! You can imagine our surprise when we were handed something the size of a popcorn kernel. Maybe the cupcake fad is not over after all. Cupcakes are just downsizing like everyone else in New York.

The tiny cupcakes look delectable, but seriously–a silver-dollar-sized piece of cake and frosting for $1? It probably costs $1 to make four batches of the cupcakes.

SEE ALSO:
The Biggest Market Losers of the Coronavirus Crisis

If Melissa is around long enough for the cupcake trend to die, she could simply miniaturize the next trendy baked good and go from there. Smart.