This is a guest post by Riveting Rosie Reilman. 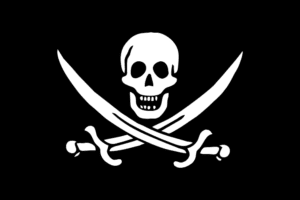 What woman wouldn’t want to embrace the likes of Captain Jack Sparrow or young Will Turner? What man doesn’t secretly wish they were one of these two? But that’s not exactly what I’m talking about.

What I am talking about is putting an end to doing things the way we’ve always done them. How businesses worked in the past aren’t necessarily what is going to make them work now or in the future. Instead, businesses should take a look at piracy to fuel their company brands and increase consumer support.

I got this idea after reading A Pirate’s Dilemma by Matt Mason, which I started awhile back. The book goes through various creative movements that have all begun by one “pirate” ripping off someone else’s work, particularly large companies. The conclusion that Matt Mason draws is that the whole piracy movement fuels creativity and has great potential in solving major problems.

One example of this is the prescription drugs market. Western drug companies don’t sell AIDS drugs to the developing countries that make up 90% of the people suffering from AIDS because they can’t afford to pay the price. Because of profit, drug companies use patents to ensure that cheaper, generic drugs do not enter into these developing countries as competition. (Page 62 if you’d like to read more about this particular example.)

The problem is that many lives could be saved, but fear of losing profit stops these companies from saving those who need it most. Mason suggests companies need to harness this creativity and collaborate with these so-called pirates.

OK, so this is an extreme case but just think about it: What would happen if instead of simply worrying about dollar signs and only the bottom line? Too often companies forget what customers are saying, how they perceive the company’s brand and how the product or service can serve creative thinking and the consumer.

More and more these things are what ultimately will affect your bottom line. Companies are more concerned with manipulating these things on the outside, instead of making a change internally.

Consider this quote about pirates by Chris Brogan. While the post is analogous, the idea behind it supports this point:

We need to focus harder on the goals than we do the infrastructure, the excuses, the labels, and everything else that gets between us and a goal…

Throw away all the excuses. Here’s where we tie in the pirate ships. Pirates didn’t give a rat’s ass what their ship looked like, or even whether it was their ship in the first place. They took whatever floated and could carry cannons and men, and they lobbed themselves at targets. It was messy. It was ugly. It was warfare, but they weren’t ones to fret or struggle with their infrastructure. What defined a pirate ship? That the pirates were aboard it. That’s about it….

This isn’t about chaos. It’s not about throwing everything away. It’s about knowing which parts are vital to moving through the waters, versus the pieces we keep around because that’s what we always did.

Too often corporations are quick to shut down the Scrabulouses of the world just to say they have control over the ‘infrastructure’ as Brogan calls it, instead of harnessing an opportunity for consumers to interact with a brand.

There’s a fine line in having control over a brand and stifling consumers from an opportunity to interact with a brand. An opportunity that could inspire them to act…or to buy perhaps.

Doritos’ Crash the Superbowl ad contest was an example of this idea. Contestants were converted into consumers because they had to go out and purchase Doritos to create an ad. Not only did they utilized their own creativity, but also connected with other consumers through advertising. To do this Doritos had to allow the audience to hijack the Doritos brand.

What’s even more interesting according to USA Today, the ad ranked 4th most liked among the Superbowl advertisements.

In a world where the same old corporate websites and the same old advertising campaigns are just not cutting it anymore, companies are turning to social media to pick up sales from consumers. 75% of online shoppers choose retailers based on social media feedback. It’s the same reason that most social media campaigns fail: because businesses are trying to go about new things the same way they’ve been doing the old things.

Let’s face it, trust in a company–a product, a brand–comes from regular people, people like your consumers. So why not get your consumers to help build your brand? Start thinking outside the box, and embrace your inner pirate. (Or at least make friends with them.)

Rosie Reilman writes for her blog riveting rosie on social media, recruiting, career issues and branding and is a contributor for Brazen Careerist. You can learn more about her here.