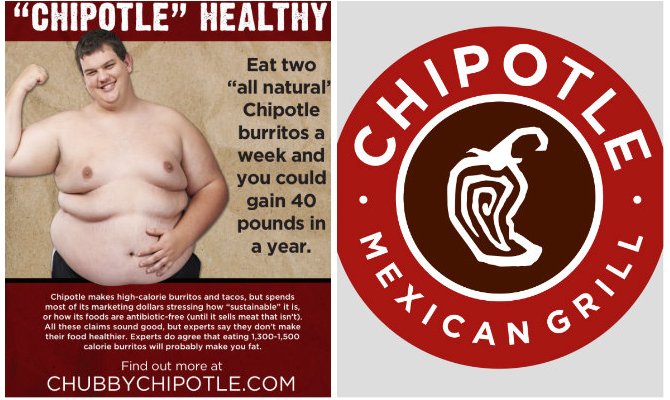 Fast-casual chain Chipotle is on the offensive against a smear campaign delivered by the Center for consumer Freedom (CCF). The group recently released a print ad campaign headlined “Chipotle Healthy.”

The print ad showcases a shirtless, overweight man with a caption to the right that reads: “Eat two ‘all natural’ Chipotle burritos a week and you could gain 40 pounds in a year.”

Admittedly, a Chipotle burrito loaded with every single ingredient can deliver a whopping 1,400 calories, approximately half the daily suggested intake for men, and nearly all the suggested calories women.

The ad was created by “smear” campaigner Richard Berman, the operator of the CCF.

In a press release the Humane Society of the U.S., says, “Berman and CCF have refused to say who is funding this [ad] campaign, but they almost certainly are factory farming interests” who dislike Chipotle “because it chooses not to sell meat from animals jammed into cages or loaded up with antibiotics. So much for his defense of the free market.”

The CCF denies that claim, stating that the agency has gone after this type of company for years. The CCF says Chipotle’s attack against completely safe GMOs and antibiotics, are nothing more than a marketing gimmick that actually puts animals lives at risk.

The attack ads also lead people to a website called “ChubbyChipotle.com,” which criticizes the restaurant chain for instructing meat producers to deliver antibiotic-free meat. The website says Chipotle has noted in its own annual disclosures that there has been an increase in animals deaths because of its practices.

The company continues to sell soda’s which are created with genetically modified corn.