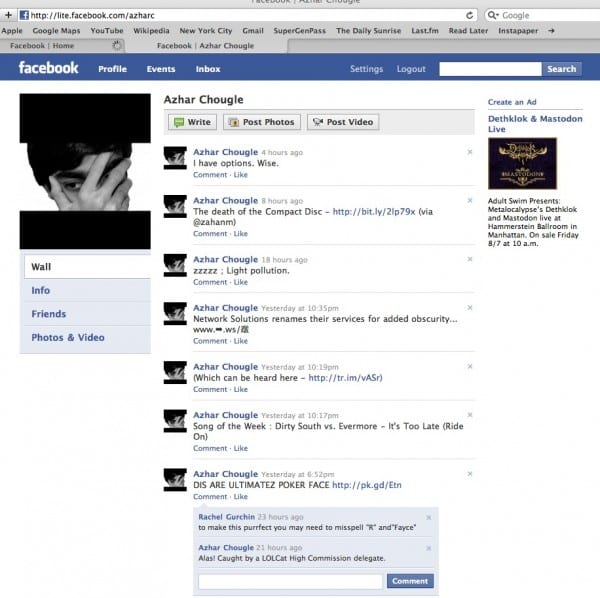 1. What is Facebook Lite?
A: It is a completely stripped-down version of the Facebook platform. From what we can tell, it is almost like a Twitter (Twitter) stream: you can see your most recent status updates and the updates of your friends. There is a left-hand navigation with four main categories: Wall, Info, Friends, and Photos & Videos. It does little more than that.

3. Is this Facebook integrating with FriendFeed?
A: Most likely not. The deal is still new to integrate their technologies in this way, and we’re hearing reports that these tests have been ongoing for the last 2-3 days. That would put its development well before the FriendFeed acquisition

4. What’s the point of Facebook Lite?
A: Speculation says it’s a direct assault on Twitter. Facebook continues to find ways to make itself competitive with Twitter. This is why Facebook has been launching features such as public profiles, profile fans, public status updates, and realtime search. Twitter is simple, so Facebook’s fighting back with the same.

However, we don’t know for sure. They may just be making a speedier version for slow connections. We’ll find out more from the Facebook team soon.

5. How can I access it?
A: It’s a limited test for only a subset of users. The fact that thousands, if not millions of users got the test notice was a bug. Most likely Facebook will open up the test to more users very soon, especially since everybody now knows about it.

One of Facebook Lite’s major draws is that it can be accessed quickly, from a variety of Internet connections. This enables easy access for users all over the globe.

Facebook is doing the right thing by trimming down. As MySpace proved, once a better social networking product comes along, it’s just a matter of time until most users defect. By adapting Twitter-like qualities to its software, Facebook attracts more users, and offers more incentive for existing ones to stick around.

If Facebook offers enough simplified perks in its new applications, it could lure away Twitter users. I’m going to watch this space with interest.