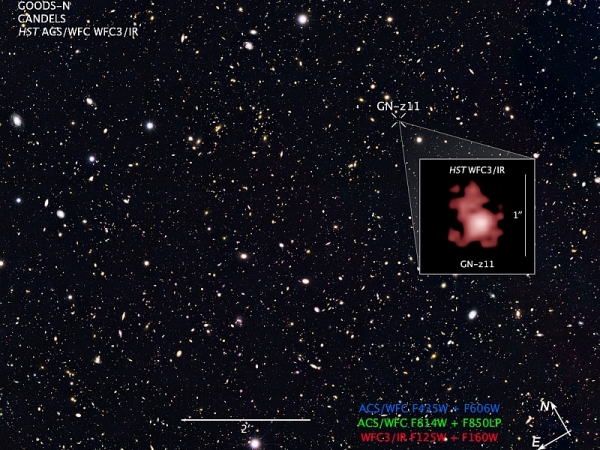 The Hubble Space Telescope has discovered GN-Z11, the farthest galaxy from Earth that has ever been discovered.

The galaxy is calculated to have existed just 400 million years after the Big Bang, or about 13.3 billion years ago.

Because light from the galaxy takes a tremendous amount of time to travel to Earth, scientists are just now seeing what the galaxy looked like more than 13 billion years ago.

“We’ve taken a major step back in time, beyond what we’d ever expected to be able to do with Hubble. We managed to look back in time to measure the distance to a galaxy when the universe was only 3 percent of its current age,” says Pascal Oesch, an astronomer at Yale University and lead author of the research paper announcing the new measurement.

To determine the distance to GN-z11, scientists measured the degree to which the light from the galaxy has been shifted by the expanding universe, known as redshift. A higher redshift indicates a more distant object.

Previously, the highest redshift ever measured was from the galaxy EGSY8p7, whose redshift was 8.68. The GN-z11 galaxy’s newly measured redshift is much higher at 11.1.