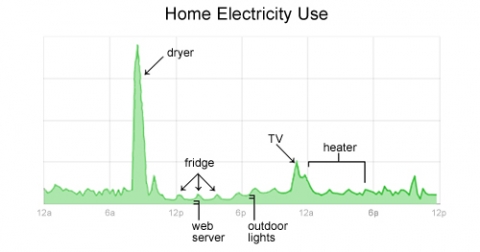 PC Magazine has an interesting article on how the Google PowerMeter is more than just a handy way to go green. It could be the catalyst for a home automation movement (remember those lights that turned on and off when you clapped?):

Google’s PowerMeter, which will enable consumers to see how much energy they’re using, is one of the best home automation ideas to come along in a long time. Although still being put through its paces by Google employees, PowerMeter may allow users to cut their power usage by up to 15 percent, a green benefit that transcends the Prius crowd. Indeed, once people find out how much money their ’80s-era Frigidaire is costing them, they’ll see the cost benefits of upgrading to a new, more energy-efficient model. Talk about a stimulus plan.

But the real benefactor here may be the home automation vendors who’ve toiled for decades in the consumer electronics shadows. Home-control gadgetry that turns lights on and off, and operates Web-enabled security cameras and thermostats, has been around for two decades or more. Do-it-yourself nerds are familiar with Insteon, X10, and Z-Wave products. (Aside: X10 shamelessly markets its video wares as spy cams for peepers.) And the ultrawealthy who can drop six figures on remote-controlled home theaters and motorized venetian blinds often hire high-end automation installers such as Crestron.

Google’s PowerMeter…has a very compelling proposition: It’ll save you money — potentially a lot of money. True, the verdict is still out on how well it’ll work, but Google certainly has the resources to make PowerMeter a success. If the software works as advertised, we’ll likely see a sales surge of smart utility meters and thermostats, two energy-saving products that exist today.

Google has a way making room for cottage industries through its breakthrough innovations. If the PowerMeter succeeds in bolstering home automation, like PC Magazine suggests, Google might have a real winner on its hands.