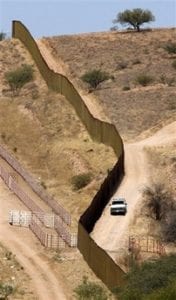 Illegal immigration is always a thorny issue. This morning, I found the following interesting factoid in a BBC article:

In August 2007, the Washington-based Centre for Immigration Studies estimated there 12.5 million illegal migrants living in America.

One year on, its survey shows an 11% drop in the number of illegal immigrants, to 11.2 million.

The Centre credits President Bush’s (immigration) clamp down. Economists says it is more likely the US economic slowdown that is deterring people.

Upon further research, it looks government policies are the main factor, as CIP states:

Immigrants are the fastest-growing sector of the U.S. prison population. The DHS agency Immigration and Customs Enforcement (ICE) detains 300,000 immigrants annually, with some 32,000 immigrants in ICE detention centers on any given day. ICE’s budget for its Detention and Removal Operations has jumped from $959 million in 2004 to $2.3 billion today.

I doubt the current state of the economy would deter that many immigrants. Unfortunately, a policy of deterrence, however successful, also requires tax dollars.

What’s the best immigration policy for a country built, and continuously rebuilt, by immigrants?