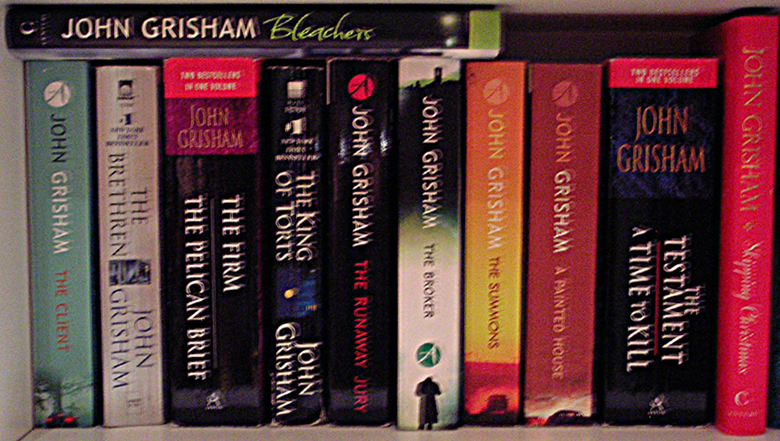 Lately everything I hear or read resembles the plot of a John Grisham novel…. complete with:

Powerful People Above the Law
Obama can’t seem to find anyone who didn’t cheat on their taxes.

Car Bombing
Someone plants a bomb in the car of an Arkansas doctor who heads the state medical board. Dr. Trent Pierce was thrown six feet.  Authorities have few leads, and they don’t know whether Pierce was a random target.

Suicide
Extended tours of duty in America’s two ongoing wars are the suspected cause for a rise in military suicides. Soldiers killed themselves at the highest rate on record in 2008. In January alone there have been 24 suspected suicides. This surpasses the 16 combat deaths for all branches of the armed forces in Iraq and Afghanistan for the same period of time.

Eccentric Millionaires
Bill Gates freaks out an audience by letting a jar full of mosquitoes free. This to bring home his point about the dangers of malaria.

Hanging
A seemingly happy 10-year-old boy dies by hanging on a bathroom hook at his school. The medical examiner calls it suicide, but the family doesn’t buy it. They think the boy was bullied.

Silenced Whistle Blower
Not only did Bernard Madoff bilk investors out of billions (allegedly), but tipster Harry Markopolos says the SEC ignored his complaints. At one point Markopolos feared for his physical safety. Now he says he has proof Madoff did not act alone.

Corrupt Corporations
The peanut debacle of 2009 gets more and more complicated every day. Peanut Corporation of America somehow got clean audit reports. And yet, still the salmonella…

At least at the end of a Grisham novel, we get some closure.