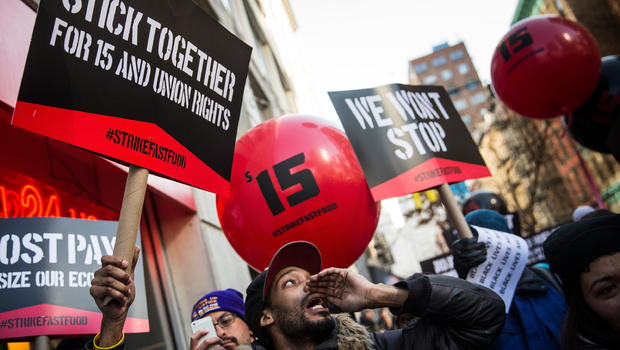 New York Governor Andrew Cuomo and legislative leaders in Albany have reached an agreement on the state’s new $15 minimum wage.

“We believe that people who work hard should be able to earn a decent living and support a family with dignity,” Cuomo said.

Cuomo says the new increases will affect approximately 2.3 million workers, who represent close to a quarter of the state’s workforce.

As a side bonus, mid-level workers should also receive pay increases as employers continue to offer a pay differential between entry-level and more senior level jobs.

Here’s how the increases will occur

SEE ALSO:
How to Apply for Unemployment Due to Coronavirus

In areas near New York City (Westchester, Nassau and Suffolk counties), the minimum wage won’t reach $15 until the end of 2021.

Businesses in upstate New York will also experience a slower rate of increases. The minimum wage would only climb 70 cents a year until it reaches $12.50 by 2020. After that, the upstate minimum will continue increasing to $15 but at a pace set by the state’s budget director and State Department.

Starting 2019, the budget division and labor department will annually assess the economy in each region to determine if any further increases should be suspended based on economic conditions.

The New York deal arrives hours after California became the first state in the nation to pass a statewide $15 minimum wage.

Some business owners warn that a $15 per hour minimum wage will cost closer to $18 per hour with taxes and other fees they must pay to the state and federal government.