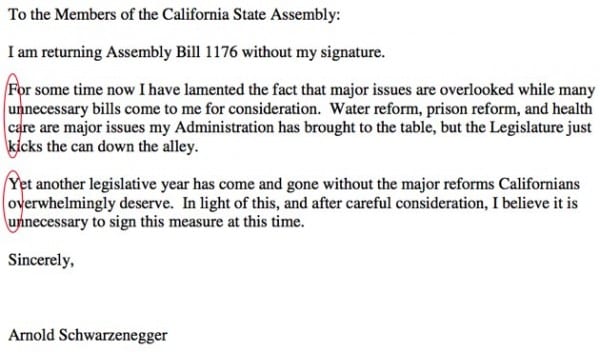 Arnold Schwarzenegger’s office sent this veto letter to San Francisco assemblyman Tom Ammiano. Read horizontally, it looks innocent enough. But when you read vertically, it says “I Fuck You.”

According to the San Francisco Chronicle,

Schwarzenegger’s press secretary, Aaron McLear, insisted Tuesday it was simply a “weird coincidence.” He sent us veto messages the governor sent out in the past with linguistic lineups such as “soap” and “poet,” which he said were also unintended.

“Something like this was bound to happen,” McLear said.

Maybe. But the veto message came after Ammiano called the governor a liar and shouted from the audience to “kiss my gay ass” when Schwarzenegger unexpectedly showed up at a Democratic Party dinner in San Francisco on Oct. 7.

Looks like the Governator still has a few tricks up his sleeve. Impressive.