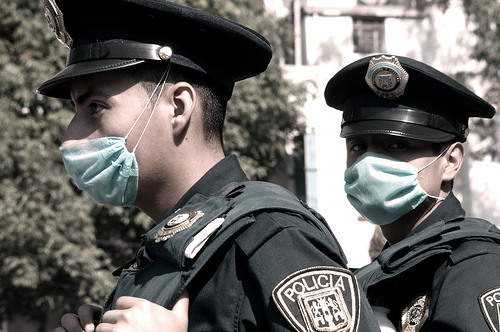 There’s nothing quite like a good plague scare to get people pontificating. Here’s a roundup of swine flu opinion from the past few days.

From a scientific standpoint, it’s apparently not a question of if, but when a flu pandemic will hit. David Bradley warns:

As I’ve discussed previously on Sciencebase, there are countless latent diseases in hosts as rodents, birds, and cattle lying ready and willing to make the species leap to humans and decimate our populations. Whereas for the last ten years or so bird flu has been the focus of much research it was always more likely that a potentially lethal strain of virus would emerge from another species and not necessarily in Asia.

President Obama used the swine flu outbreak to bring attention to the need for more and better scientific research, as it is a ‘key element of the nation’s security’. He told the New York Times:

“Science is more essential for our prosperity, our security, our health, our environment and our quality of life than it has ever been before,” Mr. Obama said. “If there was ever a day that reminded us of our shared stake in science and research, it is today.”

Quickly, don your paper masks! Stay indoors! The dirty Mexican pig influenza is here, to sicken you! Wocka wocka. Did you know that America had another swine flu panic, in 1976? Let’s reminisce, and laugh.

Politico pointed out that the Obama administration is heading into its first public health outbreak without a chief public health official or appointees in many key positions.

The Service Employees International Union has launched an online petition criticizing Republicans for delaying the confirmation of a Health and Human Services secretary in the face of a swine flu outbreak. The union accuses Senate Republicans of delaying the confirmation of nominee Kathleen Sebelius to “curry favor with extremist outside groups” and depriving the department of leadership as the nation confronts a potential flu pandemic.

I looked at a couple of theories about pandemics from top economic mindsover on Bizzia.

In a 2005 report for the World Bank, Milan Brahmbhatt looked at the socio-economic impacts of avian flu. Bird, swine, it’s all the same. While Brahmbhatt’s report addresses a lot of issues specific to avian flu, he also includes plenty the non-poultry industry analysis of a worldwide flu pandemic.

And what would we do without Google? Track the damage with the interactive swine flu map. The good news: so far Alaska’s still safe!