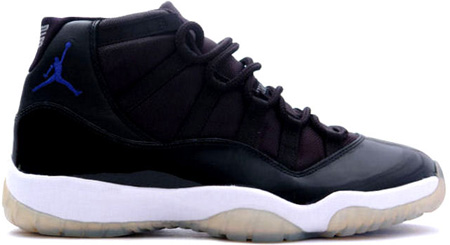 Nike released a limited number of Space Jam Jordans to stores last night. The sneakers, formally named Air Jordan XI (11) Retro Space Jams, are so highly coveted that shoppers crowded malls at midnight or camped out to get a pair.

I recall Air Jordans being the must-have sneaker in the 1990s, but what’s going on with the Space Jams now? The LA Times breaks down what makes the $175 shoe so desirable:

So what goes into making the clump of patent leather, plastic and fabric known as “Style Code:136046-041” so hotly anticipated and covet-worthy? The story starts in 1985, with the original Nike Air Jordan 1, Michael Jordan’s red-and-black, high-top basketball shoe whose color scheme earned them an NBA ban for violating the league’s uniform policy regulating colors. The NBA levied a fine against Jordan — who played on nonetheless– and a sneaker craze was born, with new, Roman-numeral-designated versions of the Air Jordan (AJ) shoe following just about every year.

NiceKicks.com’s (Matt) Halfhill points out that the Air Jordan XI that was released in 1995 had sneaker collectors salivating not just for the way it looked — riffing on a tuxedo with a shiny, black patent leather strip undulating around the base of the white nylon upper, a white midsole and a clear outsole — but for what happened in those shoes.

“It’s the first shoe Jordan won a championship in after coming back from his first retirement,” Halfhill explained. “So that was a big deal. Also the Bulls went 72 and 10 [an NBA record] when he wore that shoe.” Jordan also notched his eighth scoring title and earned his fourth championship ring in the XIs.

In 1996, Michael Jordan appeared in the movie “Space Jam” alongside Bugs Bunny and a cadre of animated Looney Tunes. Footwear aficionados noticed that the AJ XIs Jordan wore in the film were a different color combination — black on black with a pop of purple in the “Jumpman” logo on the heel. Adding to the desirability was the fact that what came to be known as the Space Jam color-way didn’t exist outside of the movie set, since only a handful of size 13s were made for the personal use of His Airness during filming. It was four more years before the shoes would be available to the general public (with a blue Jumpman logo instead of purple), and when they were released in late 2000, they were a hot seller.

(Boutique owner Tak) Kato points out that the delay to market helped stoke demand. “And they haven’t been reissued since that time. So that’s nine more years of demand there. That’s probably going to make it the biggest release of the whole year.”