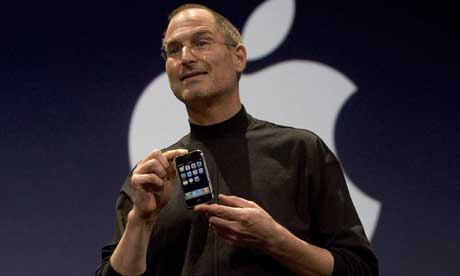 Someone recently leaked photos of the new Verizon LG Dare. With full touchscreen capabilities, a 3.2 megapixel camcorder, and Bluetooth, this new phone—

Wait, did you say the 3G iPhone is being unveiled? With a scientific calculator? OMG, ok, let me put up my decoy Excel spreadsheet so it looks like I’m doing work while I obsessively refresh YouTube in case the video appears.

Tell the team I have a high-priority adjustment to work on. I need privacy. All afternoon.

The 3G is more than much-anticipated. It’s a feeding frenzy. It’s like throwing a rare Grade A sirloin into a crowded dog park. The 3G is the steak, and the media are the dogs.

I’m excited too. And although the price went down, I can’t afford it. So I anticipate vicariously, through the media and the hoards of people who will snap up new iPhones from Apple stores around the nation.

The 3G will be the center of business and social conversation for at least two weeks. Even the dorkiest of 3G owners will attract small crowds of envious onlookers simply by whipping out the unit and absentmindedly playing with its hot new features. The 3G will represent wealth, opportunity, advancement, and sex. 3G owners will make instant friends, leading to increased networking, hanging out, and dating opportunities.

It is so much the shit, in fact, that we take for granted the mechanics behind Apple’s marketing voodoo. After some research, I found that Apple does, in fact, employ a few key strategies to nurture its hysteria-inducing brand. Here are ten things Apple does to create anticipation and a cult following:

1. Apple has a good cult leader. Steve Jobs is charismatic, sometimes cocky, but all-around accessible. He admits mistakes, making him human. Steve Jobs also embodies Apple as a company. He melds so completely with the Apple brand that it’s difficult to differentiate the man from his machines. That kind of coalescence makes him an apt, accessible figurehead.

2. Macs are sexy. There’s a sort of mystique about them that makes them appear simultaneously elite and underground. Like fashion models, Mac products are sleek fetish objects that constantly reinvent themselves. Unique, quality technology turns on techies, while trendy aspects ensnare mainstream buyers.

3. Apple travels through word-of-mouth. People talk about Macs. They talk about Steve Jobs, too (how else would I know he grows different kinds of apple trees in his front yard?). But they really talk about Macs. iPod, iPhone, iMac, Air, Nano—Mac practically owns these words. This language is hot, and people want to hear it. The benefit to the company is clear: Legions of fans create an audible online buzz before a new Mac product is released.

Jobs & Co. have mastered this effective word-of-mouth process by making the January Macworld convention an annual launch party akin to a Hollywood movie premiere. The pre- and post-show buzz that Macworld generates is incalculable in its value.

They also cite Jobs as having granted exclusive behind-the-scenes magazine interviews prior to product unveiling. Jobs, in other words, knows how to fuel word-of-mouth through media.

5. People love the Apple website. The new iMacs displayed on the homepage today more closely resemble something in a tasteful retail display than a website. Big photos and eye-catching design make viewers want to reach into the screen and grab one. More than just an information portal, the site proves to be an extension of familiar Mac products, another place where you can explore the company’s tantalizing offerings.

6. Macs are for everyone. Slick, simple ads make products easy to see and grasp. If you want the techie fine print, it’s there, but the main point is to describe products in words everyone can understand. Mac’s corporate communications make the product appear friendly, concise, and good for you. This, in turn, clarifies the brand, giving it a sort of community connotation that makes peoples’ minds connect Apple with Good People.

7. Apple is consistent. Their logo almost the same as it was 20 years ago. They don’t toy around with different corporate identities or outlandish categories. Their product evolution is easy to comprehend. For the most part, the mantra says smaller. Sleeker. Prettier. Mac users know that they can expect better things down the line. Company engineers, in turn, almost always deliver.

8. Apple has a strong community. Mac users immediately bond with one another. All it takes is a PowerBook at the coffee shop, and voila, instant ally. PCs don’t have that affect. Apple’s brand-driven niche is so strong that it evokes feelings of trust and intimacy between fellow users.

9. Apple is personal. The company has a strong reputation of listening to customers. Steve Jobs addresses popular customer requests at MacWorld conferences. Apple’s website has an extensive, intuitive customer service section. Mac has a good reputation for effectively repairing machines. The annual MacWorld conference offers free training for new users. The list goes on. The point is that Mac, like a reliable friend, is there when you need support.

10. Apple has a vision. Steve Jobs doesn’t shy away from talking about his ideas for the company. He’s clear about Apple’s direction and goals. Witness some of his quotes:

“The cure for Apple is to innovate its way out of its current predicament.”
“If we kept putting great products in front of customers, (people will) continue to open their wallets.”
“Be a yardstick of quality.”
“Design is not just what it looks like and feels like. Design is how it works.”
“I think we’re having fun. I think our customers really like our products. And we’re always trying to do better.”
“Sometimes when you innovate, you make mistakes. It is best to admit them quickly, and get on with improving your other innovations.”

Finally, a gem of a quote on fixing Apple:

“The products suck! There’s no sex in them anymore!”
(On Gil Amelio, BusinessWeek, July 1997)

So listen up, cult-product wannabes. If you find the right cult leader, build a community around your product, have a good website, stay consistent and personal, and know how to create a buzz, you’re just like everyone else. But if you make your product sexy, as though you’re infusing consumers with digital pheromones, you’re in.