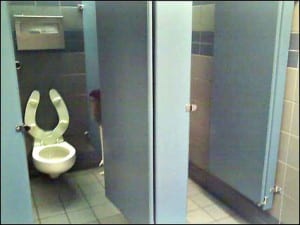 Officials say the men’s room at the Minneapolis-St. Paul International Airport where U.S. Sen. Larry Craig, R-Idaho, was arrested in a sex sting has lost interest as a tourist stop.

Patrick Hogan, spokesman for the Metropolitan Airports Commission, says that the surge of publicity also brought an abrupt end to the type of activity in the restroom that had prompted lewd-conduct complaints. Hogan says one person offered to buy the restroom stall for $5,000, but that airport officials declined.

Now that’s an interesting concept–selling airport bathroom stalls to individuals. Why not? It sounds like a good way for airports to raise money and individuals to memorialize their favorite, err, places to hang out.