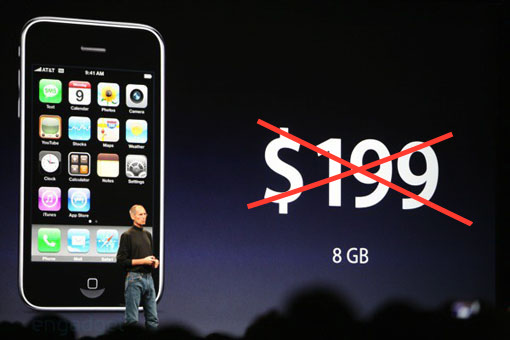 The Apple iPhone 16GB version doesn’t cost $199. Sure that is what the average consumer pays with a two-year contract, however, the device actually costs $649 or more. Essentially, Verizon Wireless and other U.S. carriers subsidize the smartphone because a customer agreed to use a certain wireless service for two years.

On Friday, Verizon Wireless announced that it was officially killing contracts. The country’s largest cellular provider will instead allow customers to purchase Apple iPhone, Samsung Galaxy S, and other smartphones at their full price, while reducing the monthly cost of services, at least in theory.

The actual cost of an iPhone was always passed off to the customer, now Verizon simply doesn’t need to hide the additional $400+ inside a customer’s cellular billing over a two-year period.

The move places Apple in a sticky situation. The company has always touted the relatively cheap $199 starting price. T-Mobile, the nation’s third-largest cellular provider hasn’t maintained cellular contracts since 2013, leaving only AT&T with the $199 price tag in the top three cellular companies.

How will Apple react? The company will likely focus on the lower monthly plans that are being offered by Verizon, T-Mobile, and other providers. The company could also push buyers towards AT&T and Sprint, both which have maintained the option for non-contract plans with subsidized phones.

T-Mobile for what it’s worth allows customers to pick up an iPhone 6 for $27 per month for 24 months, hence removing the need to pony up a ton of cash all at once.

The Apple iPhone lineup is expected to debut a next device on September 9, be sure to pay close attention to how Apple markets its newest flagship device.