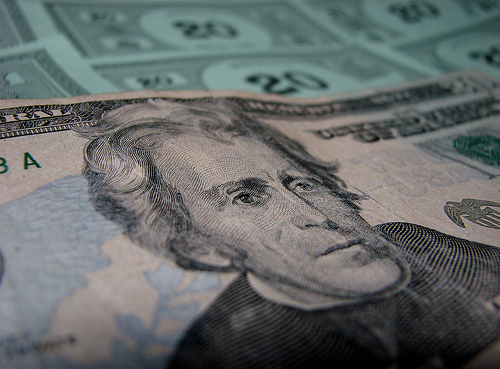 That’s what Fayetteville, Arkansas is doing. “Ozark Hours” is the new currency that small business owners will issue and accept just like regular U.S. dollars and cents. Proponents hope this home grown currency will protect local businesses from the highs and lows of the national dollar.

“All of our money is backed by nothing. That’s what we have our faith in,” said Shelley Buonaiuto, a Fayetteville artist. “Money’s not real wealth. The real wealth is our resources and our community interdependence.”

And before you go making jokes about Arkansas, they’re not unique. Groups around the country are printing currency in an attempt to help small businesses withstand the recession. The currency’s value is generally base on labor. In some towns $10 in local money is worth an hour of labor. Other places trade ‘real’ cash for the local currency, often at a discount.

In the Berkshires region of Massachusetts, for example, people trade $9 of U.S. currency for $10 worth of the local currency “Berkshares” at local credit unions, essentially providing a 10-percent discount when the money is spent.

The currency also helps barterers without direct trades to exchange the widely recognized currency for future trades. I suspect the IRS might not like this. Remember, bartering income is taxable.

The concept works well in Ithaca, New York, where they’ve been using “Ithaca Hours” since 1991.

“We have significantly affected shopping habits so people are more able to rely on one another in the community than automatically going to the mall,” said Ithica’s mayor.

The success of local currency is sketchy and anecdotal at best. As someone who grew up near the Canadian border and lived in a ‘multi-currency’ economy, I get that there are incentives when the values differ, but I’m not sure anyone needs another layer of complexity in the financial realm these days.

What’s your take on local currency?