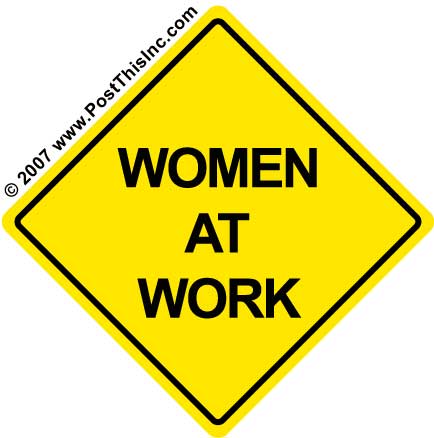 Women are dropping out of the workforce at the highest rate since the 1970s, says a New York Times article:

After moving into virtually every occupation, women are being afflicted on a large scale by the same troubles as men: downturns, layoffs, outsourcing, stagnant wages or the discouraging prospect of an outright pay cut. And they are responding as men have, by dropping out or disappearing for awhile.

The proportion of women holding jobs in their prime working years, 25 to 54, peaked at 74.9 percent in early 2000 as the technology investment bubble was about to burst. Eight years later, in June, it was 72.7 percent, a seemingly small decline, but those 2.2 percentage points erase more than 12 years of gains for women. Four million more in their prime years would be employed today if the old pattern had prevailed through the expansion now ending.

Journalist Louis Uchitelle cites the example of a 48-year-old woman named Ms. Samson, who never returned to the workforce after being laid off from a factory job that paid around $20 per hour:

She could be working. Jobs that pay $8 or $9 an hour are easy enough to land, she says. But she resists going back to work at less than half her old wage. Ms. Samson knows she will have to get another job at some point. So Ms. Samson, now receiving unemployment benefits, is going to college full time — leaving the work force for more than two years — hoping that a bachelor’s degree will enable her to earn at least her old wage of $20 an hour.

This struck me as one of those articles that doesn’t intrinsically contain much new information, but sparks discussion on the topic of women and the economy. Therein lies its value.

Going on leave isn’t always voluntary for women.
–If childcare costs eat up a woman’s entire salary, there’s no ROI for her job. She might as well quit.
–Commuting is a big consideration for mothers. What’s the point of working if you’re gone 12 hours a day, barely see your kid, and barely make money because of skyrocketing gas costs?
–Few jobs these days seem to offer benefits. Benefits are a big job consideration for many women.
–Quite a few older women (55+) find it hard, if not impossible, to get rehired after dropping out of the workforce or changing jobs.

This is a systemic problem for Americans of both genders.
–Outsourcing, skyrocketing health care costs, and wage stagnation do not a good career make.
–The economy is changing rapidly, requiring workers to adapt. They primarily do this through education. Learning new skills, then, is a necessity rather than a luxury.

And, finally–the article fails to cover the plight of single women, who often have no choice but to work.

That said, I have no idea what this means for equality, if anything. It merely appears to be another sad economic fact…