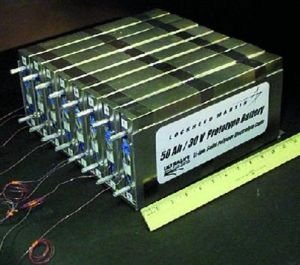 Ener1’s newly opened production facility near Indianapolis could employ 3,000 workers. Like other renewable energy companies popping up in the Midwest, people are hoping Ener1 can replace some of the fast-disappearing auto and other manufacturing jobs.

Its lithium-ion battery technology is praised for being one of the best available. But Ener1 must compete for big contracts against larger, mostly Asian firms with much more experience in this field. The company has applied for a $480 million government loan to expand its facility and hopefully allow it to land a big contract. If that happens, Ener1 says it will go on a hiring spree.

Many of its competitors, including Japan’s Panasonic and NEC, South Korea’s LG, and a joint venture between U.S.-based Johnson Controls (JCI, Fortune 500) and the French company Saft, have been making batteries in high volumes for decades. (Ed: The WSJ reports that these are mainly for small devices like laptops and mobile devices. The lithium ion specialty remains a new one.)

If Ford or General Motors are going to buy batteries for an electric car, they need confidence the company they’re buying from can deliver. The lack of experience may be one reason why GM decided to go with LG when choosing a battery supplier for its much-hyped Volt.

As the automobile industry prepares to shift from gas to electric power, grant-hungry battery manufacturers are lining up to gather $2.4 billion worth of loans and grants from the Department of Energy. The WSJ has more:

At the (application) deadline last week, the department said it had received 165 (grant and loan) applications. Companies vying for the federal money include General Motors Corp., Dow Chemical Co., Johnson Controls Inc. and A123 Systems, a closely held battery maker backed by General Electric Co. and others. States including Michigan, Kentucky and Massachusetts are also weighing in with applications, usually in alliance with their favored battery makers.

When the winners are decided, as soon as the end of July, the Energy Department may anoint Livonia, Mich., or Indianapolis or Glendale, Ky., as the future U.S. hub of car batteries. A 2008 study by researchers at Alliance Bernstein forecast the current $9 billion-a-year auto-battery market, based on lead-acid batteries, could reach more than $150 billion by 2030.

The Obama administration is trying to position the United States to become the world’s foremost manufacturer of lithium ion batteries. If the plan works, Ener1’s domestic first-mover advantages could poise it to control the global LI battery industry. “Ener1 estimates it could win 5-12% of a million-vehicle battery market, creating $2.1B in annual revenue with 15% margins,” according to Seeking Alpha. As it stands, nobody knows yet whether the DOE will give it the necessary grant.

There’s an interesting twist to this potentially All-American story. Seeking Alpha reports that…

…66% of Ener1 Group is held by a company whose ‘indirect beneficial owner’ is Boris Zingarevich, a Russian businessman with close ties to Russian President Dmitry Medvedev and Prime Minister Vladimir Putin. Foreign control theoretically shouldn’t matter to the Department of Energy, but it is looking to foster an American advanced-battery industry, not a Russian-controlled one. This is especially true since advanced batteries are likely to have military uses in addition to civilian ones.