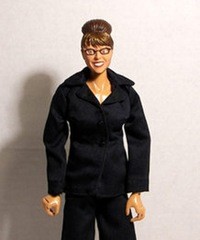 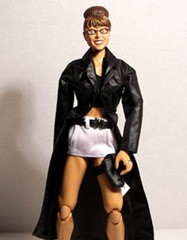 Quick Response
The ability to make a decision to move forward is key any successful business. The team at Hero Builders had to make a quick call on the Palin dolls. These dolls hit the market ten days after McCain announced Palin as his running mate.

Smooth Execution
Looking at the dolls, it’s seems Hero Builders had some male action figure bodies on hand. (Perhaps from their weapon toting Urban Crew collection, judging by the opposable gripping hands.) However, those Palin heads had to be custom fabricated. Hero Builders must have had excellent relationships with creatives and suppliers to turn that work around so quickly.

Smart Market Segmentation
My favorite part about this whole campaign (pun intended) is that Hero Builders has put out three distinct products targeted to different markets just by changing the clothing. Palin supporters can buy the suited, ‘Executive Palin’, or even the scantily clad ‘Super Palin’ for their daughters to emulate. Detractors and those who value Palin for her non-political assets can opt for ‘School Girl Sarah’.

(As the proud hockey mom of our teams only girl player, I’d like see Sarah with a pink-taped stick!)

Resourcefulness
At first glance, it looked to me like the doll’s super hero outfit was borrowed from a Matrix Trinity doll, and the school girl number from an old Christina Aguilera figure, but I was wrong. Poking around their site, I found those outfits had actually been borrowed from a collection called ‘HotBox’ fashioned after a very strange B movie. Way to make lemonade!

Leverage
Hero Builders is actually a pretty cool little company. They make custom dolls that you can get to look like yourself, your family, your boss. How cool is that? I predict this brilliant move is going to get them the attention they need to take the business to the next level. It can’t be that hard to convince the American public we need our own personal action figures.

When I tried to call the company for a statement about how they got the word out so quickly, I got a busy signal. No double they’re swamped with orders. Just like you’ll be when you master these superhero business qualities.