Technology is something that is so integral to our everyday lives, we often forget just how incredible it is. It is something that has added indescribable value to our lives because of the way it has enhanced communication, the medical field, and more.

To put in perspective how far we’ve come, take the brand new iPhoneX for example, which has a face mapping program that allows you to unlock your phone with just a glance.

As amazing as technology is, there is no doubt that there are some inventions that just seem to set us back in terms of our intelligence as a society. You can look at ten glaring examples of that below as you read about the ten most ridiculous patents ever filed. 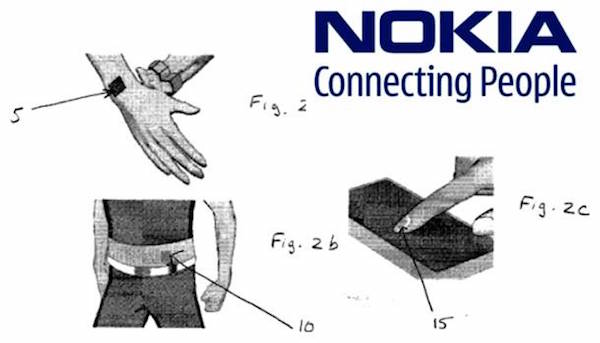 Nokia is a Finnish cell phone company that made its first mobile phone in 1982. At the time, their executives claimed that mobile phones were “improbably futuristic and niche devices.” By 1998, they were the best selling cell phone company and had just sold its 100 millionth device. A long way from shunning cell phones, they also were the first company to produce a camera phone in 2003.

In keeping with their theme of innovating mobile tech, they filed a patent for a vibrating tattoo that would alert wearers of cellular notifications in 2011. It’s a badge that would adhere to an easily concealed area of the body, and use a magnetic field to communicate with the phone. 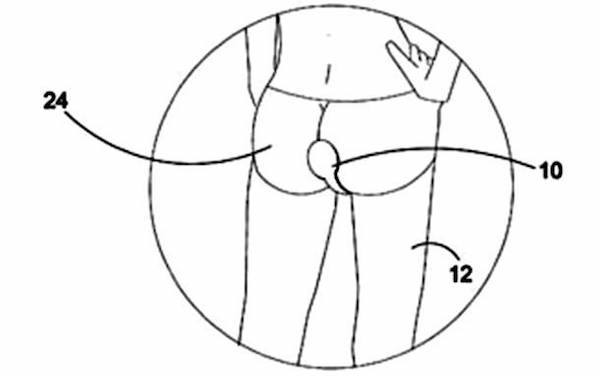 This one greatly speaks for itself. Bad gas happens to good people all the time, but it is hard to believe a joke made in a Jim Carrey sketch comedy would come to life more than a decade later. Without the catchy name of Flatu-Sense, as shown as a joke on In Living Color, this device was just dubbed a flatulence deodorizing pad. 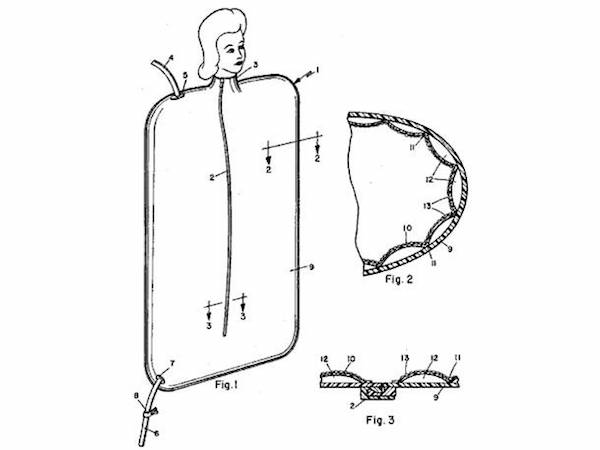 This decidedly weird device was originally patented back in the 1970’s. The idea behind it was noble, with the patent description citing problems with sponge baths like how time-consuming it can be for nurses and orderlies, as well as the excessive exposure to water on the patient. The idea of this capsule was to slip over the patient and be filled with water, much like a hot water bottle, and then used to clean them. This was supposedly faster and better for the patient. This spurred inventions similar to be used on pets.

Throughout the patent, there is no specification on what material the bag would be made out of, just saying “fluid-tight material.” It seems that this idea was only partially finished, but apparently, the inventor wanted to capitalize on the most innovative way to get clean before anyone else could get their dirty hands in his way. 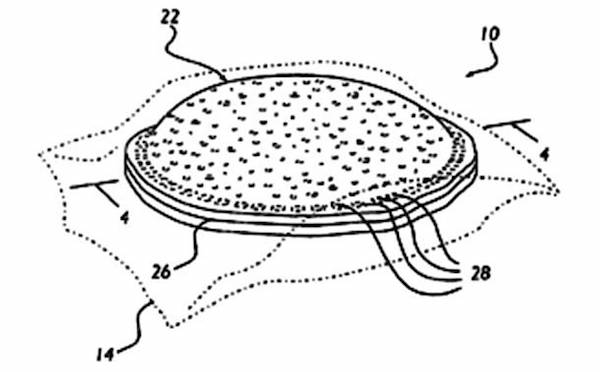 In 2005, this left plenty of lawyers with something to laugh at on their lunch hour. Smuckers attempted to patent their ‘sealed crustless peanut butter and jelly sandwich’ in 2001, which was shot down savagely with a per curium Rule 36 decision without opinion. Rule 36 is generally reserved for things that are so simply solved by just the use of common sense, that a written opinion isn’t provided.

So many of us enjoy our sandwiches “wherein a crust portion of said first bread layer and said second bread layer has been removed,” it would just be ridiculous to try to patent something so common, and it’s laughable to think that such a large company wouldn’t have the foresight to realize that. 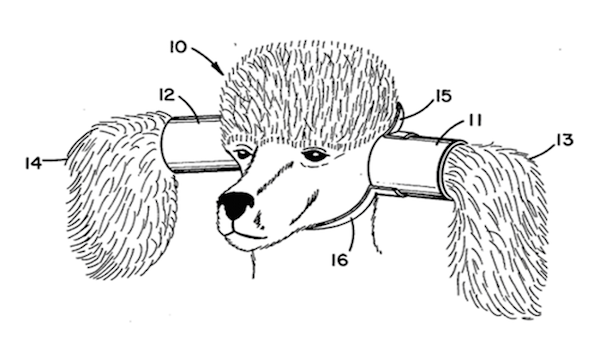 This patent was filed in 1979 by James D. Williams, who was expressly concerned about long-haired dogs soiling their ears accidentally while trying to eat. The device would include two tubes that would slip over the dog’s ears, and then something to attach them in the back to make sure they were pulled away from the animal’s face.

In the description, this device is compared to football helmets, bicycling helmets, motorcycle helmets, ski masks, and even horse blinders. Mr. Williams makes it clear that head coverings of all sorts have been invented to solve problems and protect the wearer, but this was something that was heretofore recognized but had yet to be solved.

There is no record of these ever being on sale, but you can get a poster of the art included in the patent on Amazon. 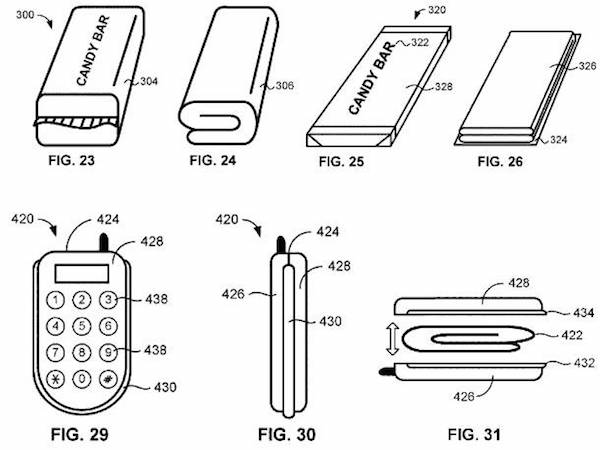 Something with this level of peculiarity would be easy to assume that it is something older, but this was actually filed in 2005, with a staggering 2.5 pages of references. The claims section includes an entire outline.

The description includes a wealth of information about how diapers aren’t properly folded and are subject to expansion; it cites their importance for young children and incontinent adults alike. It isn’t clear, but we believe this patent relates to packaging that the diaper is stored in before use, and then a discreet packaging the diaper is to be disposed of in.

The point stressed throughout is that this relates to any kind of encasement where it is unclear that a diaper (used or otherwise remains unclear) is stored within. This also includes a diaper that is more dense so that it would be able to hold more volume. 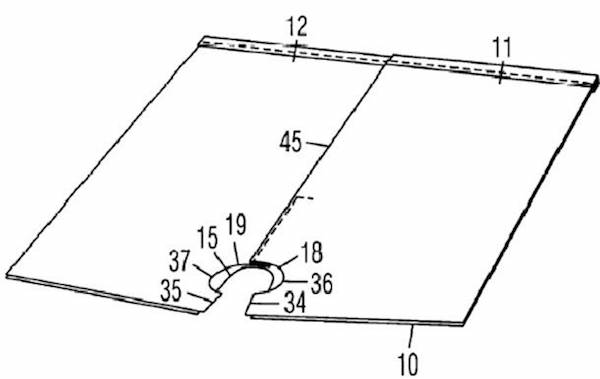 The background of this invention as included in the description of the patent starts off strong with the declaration that “The need for clean underwear is almost universal.” While that is true, the legitimacy of this patent remains questionable.

It was granted on April Fool’s Day of 2003 and was updated as recently 2012. The background also mentions that disposable garments such as this aren’t usually aesthetically appealing, and don’t provide enough discretion to the wearer.

The original patent was for underwear made out of material similar to that of VIVA paper towels. This would allow for them to fit just like standard underwear, but it may leave absorbency to be desired. This was later addressed in an updated version of the patent which now covers an outer shell made of presumably cotton or something similar, and a second piece that is worn inside of that, with an elastic waistband. The second piece looks a lot like a bikini and would be disposable and interchangeable. 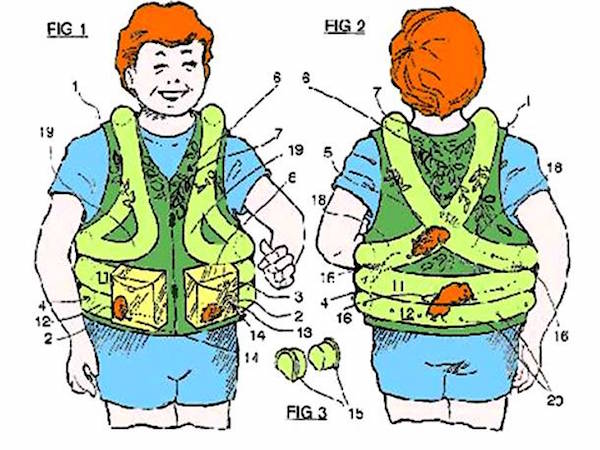 If you have ever wanted to wear one of those colorful plastic pet cages that they put on display throughout pet stores… your time has come.

The patent was filed in 1999, and the description explains it nicely, “A pet display vest for a person, having an elongated, enclosed, pet receiving, passageway extending thereacross with at least one closable pet admitting entry, at least part of the passageway being transparent so that, when the vest is worn, a pet moving along the passageway across a wearer’s body can be viewed by a spectator.”

It also warns against any trips or falls. The insides of the tubes are textured so that there is ample traction for your pet, and there are air vents throughout to be sure that they can breathe in there. 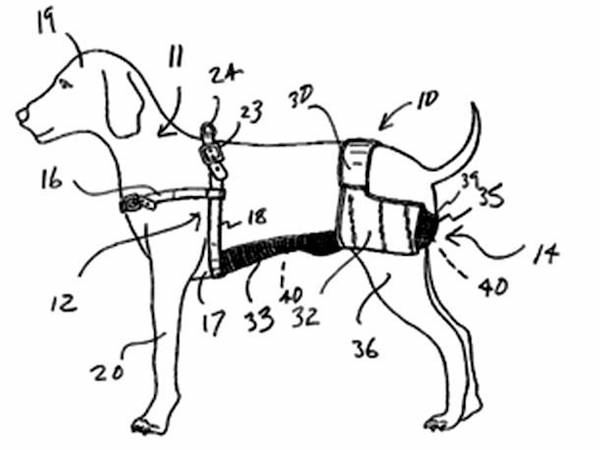 There is a broader market here than one would believe. There are many version of this product available today such as the Stud Stopper or the Delay Her Spay, but it had very humble beginnings.

The first patent of this type was filed in 2003 under the name Adjustable harness and animal birth control device. This is for people who are reluctant to spay or neuter their animals, or if their animals are too young.

The most popular of these on the market is probably the Delay Her Spay, with a product description that reads something like a Craigslist post. The inventor mentions his “prized bitch” and says the real inspiration for this device was “the fear of having a mongrel brood.”

Most of these chastity devices are a harness that attaches similarly to a diaper, with the perk that the dog cannot easily remove it. As far doing their business, one of these such belts has a vinyl barrier that will just… deflect the problem. The other says on the website to “let the mesh do the work.” Either way, we’ll pass. 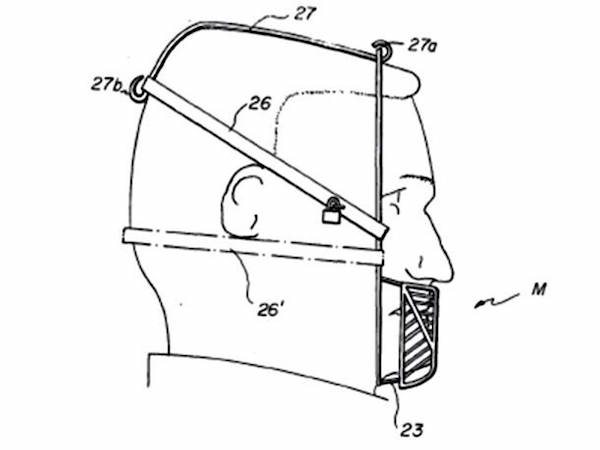 The description of this 1980 patent is rife with grammatical errors and leaves a lot to be desired in terms of common sense.

Extreme weight loss measures will always exist, but the fact that someone thought it imperative to claim ownership of a human muzzle that keeps them from eating makes us wonder what other Jigsaw-esque contraptions they dreamed up before this one stuck. Apparently, the point was to inhibit compulsive eating but was suggested to be used for smoking as well. It cites other patents such as restraining device, mouth guard for infants, and anti-mouth-breathing device.