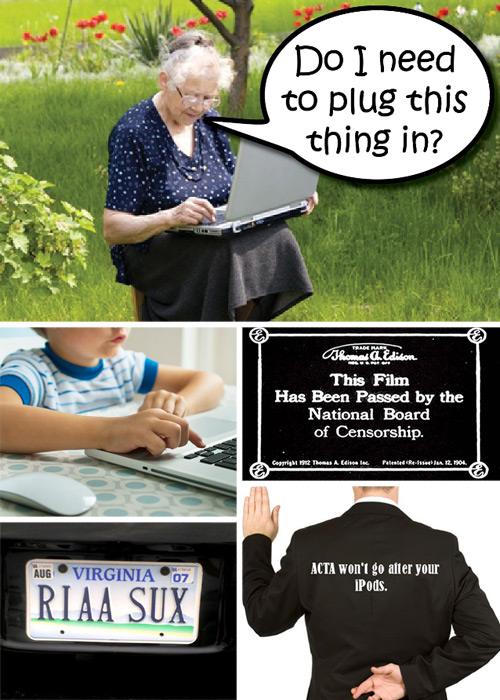 If you missed the blackout of thousands of sites across the Internet on January 18th, including Wikipedia and a black bar over the Google logo…well what the hell are you doing reading this, grandma?! I told you not to Google my name.  SOPA and PIPA are two bills that would be absolutely devastating for freedom on the Internet.  Thanks to the Herculean organizing efforts behind the January 18th blackout, SOPA and PIPA are effectively dead.

But SOPA/PIPA were not the first and will certainly not be the last attempts to stifle Internet freedom.  So prepare your DDoS attacks, don your Guy Fawkes mask, and definitely don’t forget your provisions of cute cat pictures; these are the next battlefronts in the war on the Internet.

People Who Don’t Understand the Internet 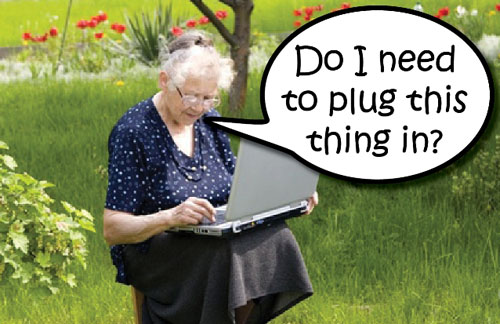 While it may seem adorable when old people ask you what “The Google” is, or what all the buzz about “Twatter” is—perhaps adding an Andy Rooney-esque vignette about actually talking to people in their day—it’s actually quite dangerous.  These older people are police officers, FBI agents, judges and politicians.  And they are the ones setting legal policy in regard to the Internet.  Too often, in their opinions, the internet—this strange newfangled thing their kids and nephews use—isn’t as sacrosanct as, say, a vault of physical files in your attic.

The problem is, to those of us who’ve had the Internet for most of our lives, our gmail account is our dusty box of personal information in the attic.  But to the FBI, pretty much anything you post online is considered part of the public domain.  Let’s not even get started on the subpoena by the Boston Police department that ensnared thousands of innocent accounts simply because they included the hashtag #BostonPD.  If either the judge or the district attorney had any idea what a hashtag was, they would have never allowed the subpoena to go forward, because of its gross invasion of privacy.  It’s almost as if they’re feigning stone-cold-ignorance of how technology is used in a deliberate effort to expand their legal reach, which is actually a lot scarier.  For now let’s just hope that they’re actually that stupid.

The RIAA and MPAA (even without legislation) 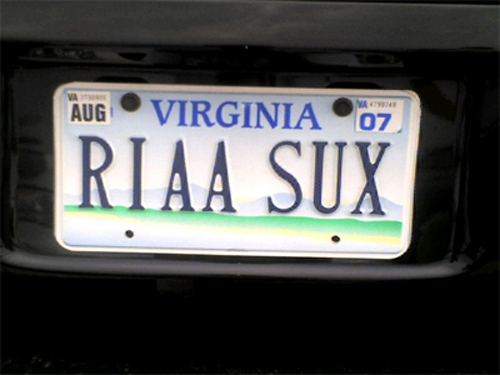 The chief forces behind SOPA/PIPA and suing children, the MPAA and the RIAA are like the cackling, evil villains of the battle for Internet freedom.  If you believe their numbers, Internet piracy is destroying the American economy, disenfranchising artists (because we’ve all noticed the lack of entertainment being produced), and probably kicking puppies and molesting children (who knows?).  And if you don’t do what they tell you to, MPAA president Chris Dodd will straight up prison-shank you.

Well SOPA/PIPA was defeated, right?  What do we have to fear from the MPAA and RIAA if they can’t get their legislation passed?  When you have millions of dollars and friends in high places, you can exert a lot of pressure even without laws.  Even excepting the RIAA’s practice of suing people for exorbitant amounts of money, there are plenty of examples of them pressuring search engines, ISPs, Universities and even entire countries to get what they want. 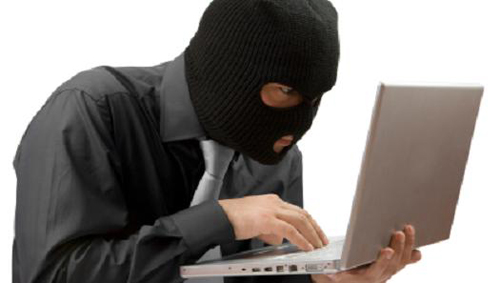 The Digital Millennium Copyright Act (DMCA) was a 1998 copyright law intended to take copyright law into the 21st century.  Ostensibly a good idea, the DMCA was supposed to allow the Internet to continue being awesome, while also protecting the legitimate copyrights that could be easily infringed in the new digital environment.  But of course you’ll notice that this law was passed almost a good decade before streaming video was extensively widespread.

This has led to several interesting abuses of power.  Under the law (and subsequent court decisions refining its scope), the owner of a copyright has the right to request infringing content be taken down.  That sounds all fair and good, but we’re trusting overly-litigious, private companies to responsibly claim copyrights and not use it as a cudgel to suppress customers and competitors.  Which is exactly what they did (the cudgel part, not the responsible part).  They’ve repeatedly claimed that they don’t need to consider “Fair Use” when taking down a video.  And according to Google, almost 40% of claims are illegitimate, and as many as 50% of claims are directed as competitors.

The law’s in desperate need of updating, but assuming that it will be re-written by politicians who openly admit they have no idea how the Internet works and are solidly in the pocket of companies that get physically ill whenever someone doesn’t pay them, odds are it will only get worse. 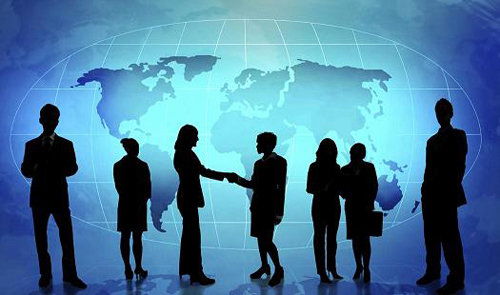 In all the talk about SOPA and dangerous government censorship, it’s worth remembering that your Internet check goes to a private company, full of fallible individuals that can’t be booted out of office in the next election.  And there are many, many companies out there with millions of dollars and vested interest in controlling how they are portrayed on the Internet.

The list is extensive and reads like the lovechild of George Orwell and Eugene V. Debs.  The Boston Globe and Diebold edited Wikipedia extensively to make themselves look better.  Verizon blocked the messages of an abortion rights group because it policy forbids the transmission of “unsavory” information.  Multiple companies shut off third-party donations to Wikileaks.  The cases go on and on. 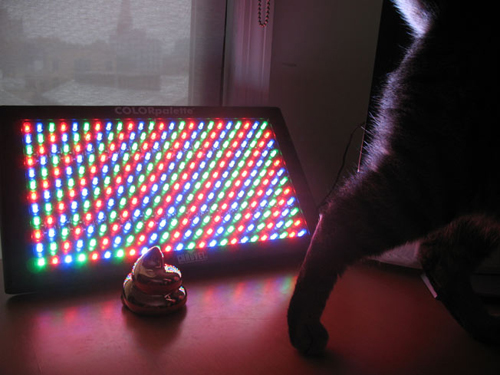 You likely have a long, torrid relationship with your Internet Service Provider (ISP) that, like any good relationship, is filled with hate and resentment.  Many of you may be familiar with Comcast, the proud winner of “Worst Company in America”.  But aside from the worst customer service on the planet, they’re also have a long history of doing their damndest to section off the Internet into little boxes and charge an exorbitant admission fee.  All while tracking your personal information and handing it over to the government at the drop of a hat.

All the major providers are quickly jumping on to the Tiered Pricing bandwagon, ostensibly to provide cheaper Internet to those who only use it for light browsing and e-mail, and bigger, more expensive Internet for those with huge bandwidth requirements. 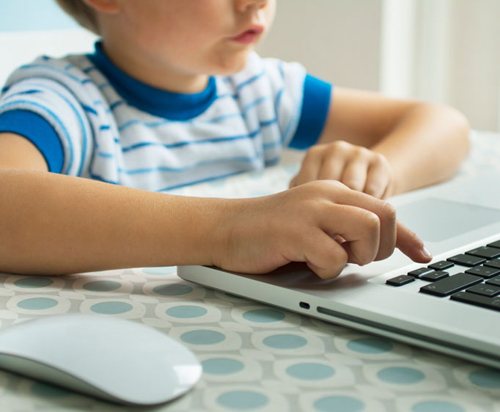 Who doesn’t want to protect children from being exploited for pornography? That’s the premise behind the Protecting Children from Pornography, and act that started working its way through the bowels of the American legislative process in 2011.  The purpose of this bill is to allow law enforcement personnel to peel back the protections of the anonymous Internet, and track down child pornographers.

A noble goal that pretty much no one argues with.  The problem really needs no jokes, scare language or dressing up to be absolutely chilling: this bill requires your ISP to track all of your personal information—your name, address, credit card number, browsing history, etc…–for 18 months.  And they’re supposed to turn it over to law enforcement without a warrant.  All the officers need to do is ask.  To be fair, the bill specifies that they must say “please with sugar on top” and they have to promise to be “extra special careful that this isn’t used irresponsibly”. 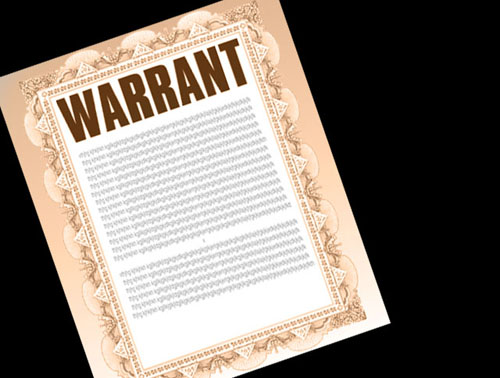 But before you get too up in arms about Protecting Children from Pornography, rest easy in the fact that the government can basically track you without a warrant anyway.  Remember that whole warrantless wiretapping thing a few years back?  Well despite all the hopey changey-ness floating around Obama, he’s continued using this method.  While it’s not a complete database on every American searching the Internet available at the drop of a hat, it’s pretty damn close.

The “good” part about the NSA wiretapping, is that they still need to get approval from FISA courts, and the suspects need to be part of an ongoing investigation.  Which makes me feel so very safe knowing that this terribly powerful tool will never be misused or abused by our sterling elected officials and their record of professional ethics that are beyond reproach. 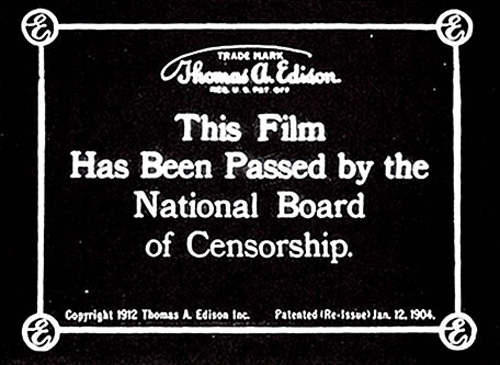 For all the dangers that private companies and groups and represent to Internet freedom, they have nothing on governments around the world, who have been censoring things since Caveman King Grog didn’t like Torg’s word for “rock” and ordered Torg executed by smashing.  We’re a little bit more civilized these days, and politicians at least have the decency to pretend like they’re protecting us from something terrible (usually pedophiles, sometimes democracy).  For all the fear surrounding SOPA/PIPA, the US government has no problem causing hell for websites it doesn’t like.  Just ask MegaUpload and Wikileaks, both which were shut down briefly without due process.

And let’s not even get started on censorship in other countries.  Not even counting giant blockers like China, even developed nations who should know better have been blocking access to thousands of sites.  One of the more hilarious examples is the censorship regime in Australia, which is probably the most famous for using the “Won’t someone think of the children!?!?!” justification.  But when a secret blacklist of blocked sites surfaced, it turns out Australia was in fact using over half its time protecting its citizens from the dangers of dentists and dog kennel websites. 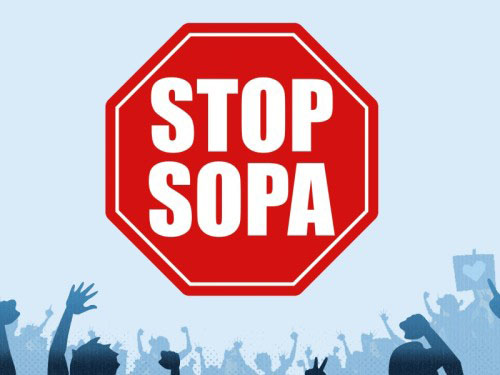 Reports of SOPA’s death may in fact have been somewhat premature.  The bill is not becoming law any time soon, but it’s only been shelved for the time being.  It still enjoys the support of at least 65 representatives in the House, not to mention the piles of money the MPAA will continue to put into buy votes.

It’s a guaranteed certainty that this bill, in some form, will rise from the grave and wreak havoc of the freedom of the Internet once again.  Lamar Smith, the bill’s chief sponsor, isn’t going anywhere and—keeping with the venerable Washington tradition—will continue to be dumber than a pile of rocks about the Internet.  The bill will likely be quietly passed through a committee and voted on before the Internet can notice and mobilize a counter-attack.  After all, you can’t expect apathetic Americans to care about politics all year long, right?  That’s just exhausting, we have episodes of Glee to catch up on.  And they can’t black out Wikipedia several times a year, can they? 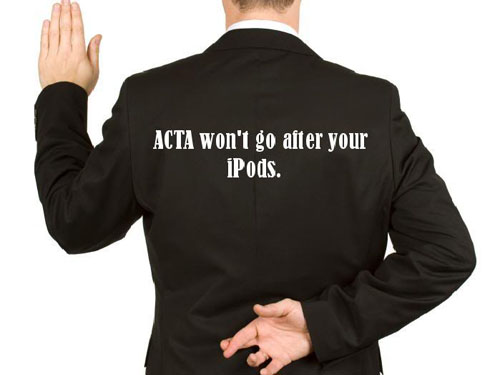 Sometimes referred to as “SOPA’s evil twin”, ACTA is a multilateral trade agreement designed to create a new and more robust system for protecting intellectual property.  Did you get the impression that this was a legitimate piece of legislation?  Sorry it’s actually a jumbled mess that was mostly negotiated in secret, outside of the current international body governing intellectual property, and without the input of most developing nation.

So what’s so bad about it?  Well part of the problem is, no one really knows.  The treaty is too much of a chaotic mess of overlapping, overly-vague provisions that prescribe unnecessarily harsh punishments for levels of piracy that are never clearly defined.  One specific provision that has people especially worried is the removal of safeguards that shielded ISPs from legal repercussions as a result of the actions of their users.  Meaning that if you pirate a song on AT&T’s network, the copyright owner can go after AT&T.  And God knows what that lack of protection will do to ISP’s already draconian policies toward users.

ACTA is so overwhelmingly unnecessary, and has already led to protests number in the tens of thousands in Poland and other cities in the European Union.  After the pitched battle over SOPA/PIPA and now this battle over yet another 4-letter word, it just leaves one wondering: in the middle of one of the worst economic downturns in recent history, with their approval ratings hanging around the single-digits, why are they so obsessed with passing an obscure and oppressive copyright law?