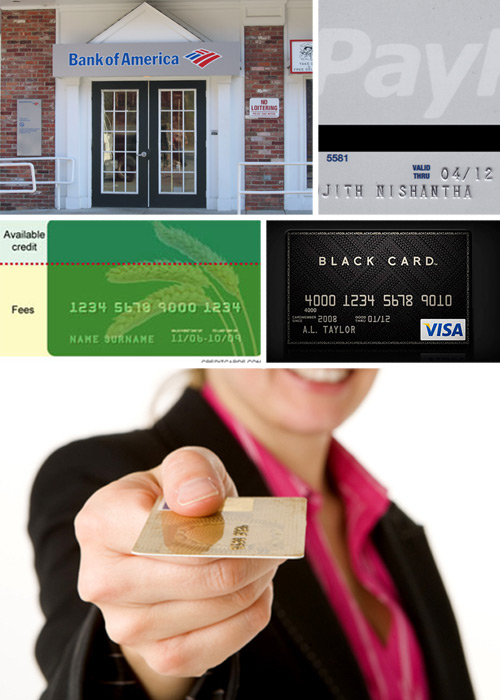 Credit is the lifeblood of any well-functioning economy.  It allows us to buy cars, houses, education and terabytes of filthy, filthy porn (you know, the stuff so filthy you can’t find it for free).  For most people, their most accessible line of credit is a credit card — basically an instant ability to cover sudden outrageous expenses without having to pawn belongings.  If you don’t have a credit card, you better have a rainy-day fund as big as Scrooge McDuck or else you’re one car repair or medical expense away from bankruptcy.  Credit card companies know that customers depend on this line of credit, sometimes desperately, so they do their best to provide it an easy and simple a fashion as possible.  Just kidding, they try to gouge customers for every last red cent in anyway that will keep them technically legal.  Or they’ll just take your money without telling you.  You know, like the exact definition of a thief. 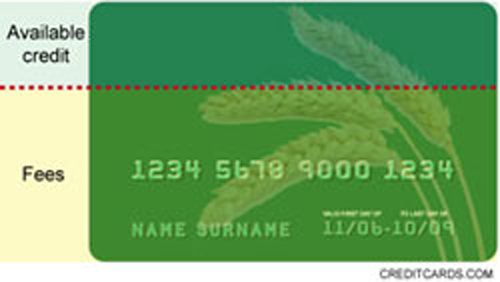 For those with low incomes or abysmal credit scores, getting a credit card with a decent interest rate and credit limit can be a frustrating challenge.  Once you finally do find a creditor willing to give you the time of day, you’re likely to end up with an usurious interest rate and a credit limit roughly high enough to buy some crusts of stale bread and weeks-old milk.  While unfortunate, from a business perspective this makes sense.  A bank can’t simply go lending out money to high-risk individuals without trying to protect their investment somewhat, so it’s hard to blame them for being careful and circumspect about who they extend credit to.

Or it would be, if this is what actually happened.  In reality, these cards for the credit-poor are often what experts refer to as “Fee-Harvesting” cards.  What this means is that someone might get a card with a limit of $200-$300 dollars, and an interest rate in the high 20s.  Buried in the fine print of the agreement is a whole bevy of fees, often adding up to a huge chunk of the customer’s credit limit.  In one case, a customer with a credit limit of $250 was only able to put $50 on the card after all the fees were applied.  The worst part about all of this is that the fees apply whether or not the card is used or paid off each month.  Meaning that someone who doesn’t pay attention to the fine print, and barely uses the card at all, can suddenly find themselves hundreds of dollars in debt after a few months.  And that debt will only continue to pile on at that incredibly high interest rate.

From the credit card company’s point of view, they just got someone hundreds of dollars indebted to them, without having to extend more than a few bucks of credit up front.  This is why they apply the fees, instead of just making the credit limit that much lower.  This apparently all happens as they cackle cravenly while swimming through piles of money and murdered puppies while ignoring evidence that severe debt can often lead to depression and suicide. 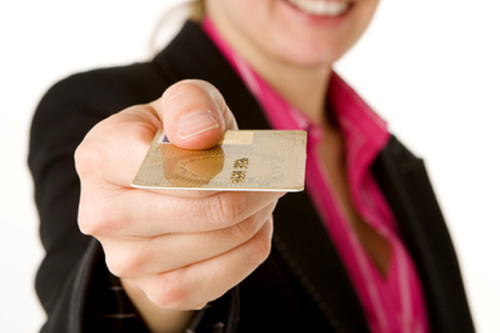 Believe it or not, those promotional in-store cards that usually come along with some sort of discount or interest-free purchase are actual credit cards.  You could use your Sears card at Home Depot and your Best Buy card to buy cigarettes at the corner store.  A large section of these cards are issued by Monogram Credit Card Bank of Georgia, which delights in teaming up with retailers to bend customers over a pinball machine.

In what you’ll begin to notice is a recurring pattern, customers are misled about the terms of whatever deal they’re signing, whether through terms, interest rates, or hidden fees.  One good example of the sociopathic deft of Monogram was a promotion with Home Depot and Lowes.  Customers were allowed to purchase items using the store’s credit cards, and pay them off interest-free.  Except they never mentioned to the customers that they were required to pay down the interest-free balance before anything else, meaning customers who purchased anything else were forced to watch that item gather interest while they paid down the cheaper balance first.  (Fortunately, this practice is now illegal).

Unsurprisingly, several class-action lawsuits have been brought against Monogram.  Monogram responded by saying “that’s so quaint” and pointing out the required arbitration clause in the customers contracts—basically guaranteeing that any complaints won’t be able to legally see the inside of a courtroom. 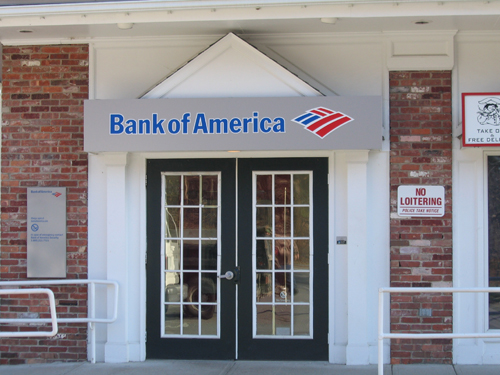 Oh Bank of America.  When you aren’t trying to charge $5 for using your debit card each month, you’re borrowing billions of dollars from the Federal Reserve and making billions off of taxpayer money.  It seems like there’s no money you won’t take, and no one you’ll avoid paying it out to (except your executive bonuses, of course).  So because they hadn’t found enough avenues for evil-doing, BofA decided their credit card arm should get involved in the financial wizardry of tricking people into owing the bank more than they could possibly afford.

former support people came forward in 2008 and admitted to a host of unethical and illegal practices that were rampant throughout the company.  These two former employees worked in a call center, which was ostensibly there to help customers with questions or account issues.  Their actual purpose was to push huge cash advances on customer’s credit cards onto people who couldn’t afford them.  As one of the employees put it, instead of helping the customers,   “Every customer that calls in is a mark, it’s a great big con”.  Some of these advances totaled upward of fifty to one hundred thousand real actual dollars.  The interest rates on these loans? As high as 28%.

One of the hilarious unintended consequences of offering people tens of thousands of dollars right now, is “support” reps had trouble convincing customers they had anything to spend several grand on.  The favorite expense they suggested was using the cash advance for a down payment on a house.  Since down payments are used as a way for home buyers to prove that they have enough money to make regular mortgage payments, borrowing the money for a down payment is highly illegal.  BofA circumvented this by telling customers they could deposit cash advances in their checking accounts, and what happened to the money was the customer’s business.  So yes, one of the largest financial institutions in America literally went with the “I’m going to take this money and leave the drugs here on the table, what you do with them is not my responsibility” defense. 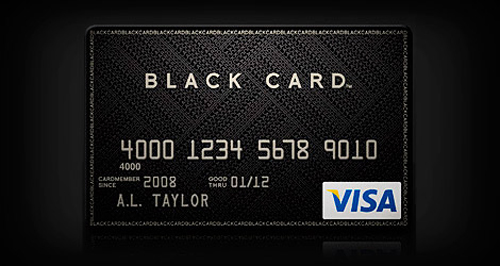 Some of you may be familiar with the American Express Centurion card, and by familiar, I mean you’ve heard someone rich brag about it.  If you actually own one, please stop reading this and immediately give to the You Have Way Too Much Stinking Money Fund for Poor Internet Writers.  It’s basically a card for the super-rich that requires a $2500 annual fee but gets American Express to be your personal bitch.  It holds a Guinness Record for shortest time from reveal to panties hitting the floor in history.  Basically if you have the AMEX Centurion, your credit problems involve figuring out which supermodel to sleep with, or which low-income community will be the least-likely to fight your company’s toxic waste dumpings in court.

In contrast, the VISA Black card is marketed to those with decent credit who want to look cool to idiots and like complete tools to everyone else.  The card requires an annual payment close to $500 dollars, putting it well near the top of the market as far as annual payments for normal people things go. For this hefty payout, the lucky owner of this card gets… well, shittier terms than just about any other comparable credit card.  A 14.99% APR doesn’t look too attractive when a little bit of bargaining can get most credit cards into the single-digits. VISA is essentially piggy-backing on the luxury image of the Centurion card to sell an inferior product to people who don’t understand personal finance. 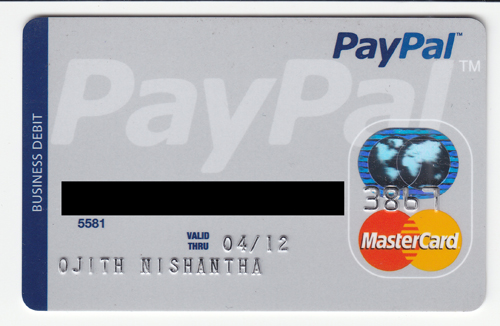 Most of us know PayPal as that thing that we use to buy stuff on eBay with, and also probably the expensive way to get money on or off the Internet (as opposed to, oh I don’t know, an actual credit card).  For those who are fans of redundancy, PayPal also offers a credit card.  To online retailers and freelance workers, PayPal can be a convenient way to move money around the Internet with relative speed and convenience, and some people like the idea of keeping these accounts separate from their bank or “real” credit cards.

The problem arises not with the card itself, but when you try to get access to the money in your PayPal account to pay off your balance.  Funny enough, PayPal is not legally considered a bank, meaning it’s not subject to the reams of laws and consumer protections that banks are.  While this makes sense because PayPal actually holds on to your money (instead of lending it out as banks do), that means you’re dealing with a private company with their own policies about how you get to your money, and we all know that customer support is a real joy to deal with when you’re trying to transfer funds to pay your bills on time or avoid a ten percent jump in interest rates on your credit card.

What does this mean for the average PayPal user?  It means that, “for whatever reason at any time because we want to, so now go fuck yourselves, that’s why”, PayPal can freeze your account and redistribute funds as it sees fit.  This happens especially often to online merchants, and pretty much all the time during informal charity events.  In one case, more than $30,000 raised for victims of Hurricane Katrina had to be returned.  Why?  No reason, just because PayPal thought it looked “suspicious”.  And while every other credit card company on the planet will inevitably try to suck a few extra fees and interest rate hikes out of you, at the very least they let you spend your own money.