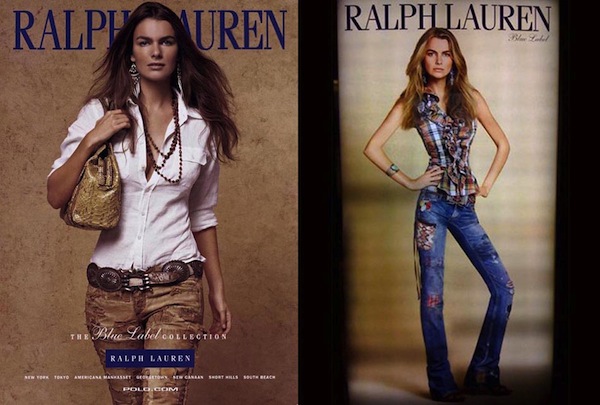 Here we see two separate Ralph Lauren adverts featuring French model Filippa Hamilton. The ad on the right is so altered that Hamilton’s pelvis is smaller than her head! Somehow, Ralph Lauren decided that this unrealistic – and frankly disturbing – image was a great way to advertise their product. What they got, however, was a hue and cry, with critics ridiculing the ad and eating disorder charities up in arms. “I was shocked to see that super skinny girl with my face,” said Hamilton. “It’s very sad, I think, that Ralph Lauren could do something like that.”

In the end, a spokesperson for Ralph Lauren issued an official apology, claiming the company would “take every precaution to ensure that the calibre of our artwork represents our brand appropriately.” But things only got worse when news got out that Hamilton had been fired for being overweight in April 2009, a few months before this altered image was “mistakenly” released in Japan.