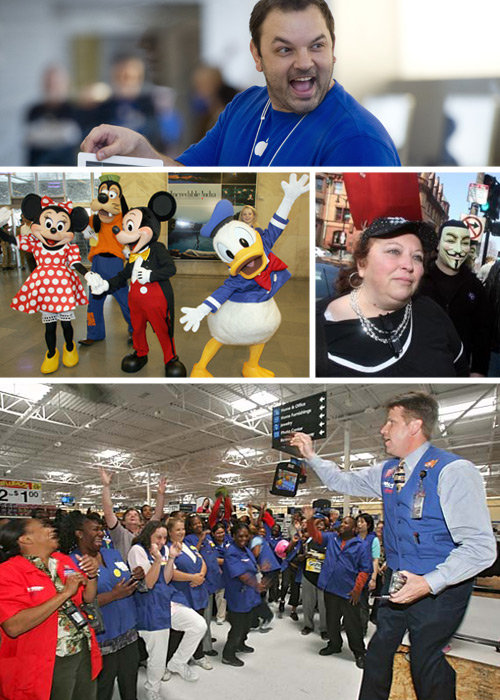 Large corporations are responsible for making sure that their hundreds, often thousands of employees are happy, healthy, but most importantly: faithful to the company. How do large businesses somehow convince throes of people to clamor for a job that pays poorly, is often overcrowded with demanding customers, and has little room for advancement or promotion? Well, you’re part of the team now. It’s not about business; it’s about providing outstanding service for a greater good. Don’t you want our company to succeed? Isn’t what we do important to all of us? Here are five companies who are accused of brainwashing their employees. Apple stores across the nation receive hundreds of resumes a week from people who are desperate to earn $30,000 a year in a fast-paced, demanding environment. Not only does the pay suck for such a demanding job, but weeks of training are often required before a candidate is hired in the first place. Over at Verizon, employees are averaging almost twice as much as Apple employees. So why does everyone want to work for Apple instead?

30,000 Apple employees work in US stores. Applicants want to work at Apple because it’s perceived as “cool,” and Apple does a good job of reenforcing that notion by telling candidates that they’re looking for “affability” and “self-directedness.” Technology can be learned; proving that you have an attractive personality is the first priority.
After attending a conference/seminar (but don’t be even two minutes late, lest you want to be disqualified on the spot), The Chosen Ones enter into training. This can last days or weeks.

New York Times reporter David Segal spent some time examining the life of an Apple employee from indoctrination, and notes that new employees would be fervently applauded upon entering the room, often for “several minutes” at a time.

“The idea is to instill in employees the notion that they are doing something far grander than just selling or fixing products. If there is a secret to Apple’s sauce, this is it: the company ennobles employees.”