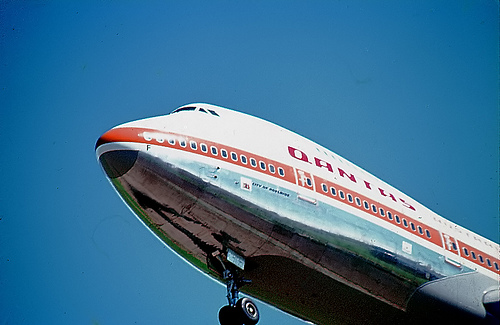 I can be a savvy, well-dressed business traveler–when my company pays for it. But with my current small-business budget, I’d rather cram myself into a budget airliner’s T-row (you know, the one in front of the bathrooms) in livestock class than spend $20 extra on emergency row seating.

Even if you have a high discomfort tolerance like me, some airlines still get away with charging more than you need to pay for a flight. Over the years, I’ve discovered a few tricks that have helped me minimize transportation costs, to the point where friends have expressed jealousy. Here’s what I’ve learned.

Tip #1: Cut out the cab
What’s the point of getting super-cheap airfare if you’re going to spend an extra $50 on a cab ride? If you can schedule in a little extra time, public transportation can be your friend. If you’re gone long enough, it might even beat airport parking rates.

I recently took a road trip to Hood River, Oregon from Colorado, where I live. After a week in Hood River, I wanted to visit a friend in Ashland, Oregon, while the friend I drove with returned with the car to Colorado. This meant I was in Hood River without a car. I wanted to get to Ashland, spend a few days there, then go back to Denver.

My first challenge was to get from Hood River to Portland, OR, which is about an hour away. I had to leave on a Saturday, barring me from the one weekly shuttle that does the trip. A Craigslist’s rideshare post didn’t pan out. Taxi fare cost upwards of $65.

So, for $23, I took that eminent bastion of American luxury, the Greyhound bus. Then, for a little over $2, I took Portland’s light rail all the way to the airport.

It wasn’t a bad deal. And, aside from the obligatory Greyhound scents and walking a couple of blocks from the station to the light rail, it probably only took about 30 minutes more than a cab would have.

Tip #2: Look Outside Airline Comparison Sites
Airline comparison sites don’t include every airline out there. If you don’t find a price you’re comfortable with through a comparison site, try those unlisted airlines. Or you can try airline consolidators, which sell seats at near-wholesale prices. AirlineConsolidator.com is one such consolidator.

Next, I had to figure out how to get to Medford, OR. This would either take 6+ hours on the ‘Hound or, for $13 more, less than an hour on an airplane. The flight would cost $70 each way. So, for $140, I could get back to Portland. What about flying back to Denver?

At the time I looked, a one-way flight from Portland to Denver cost $230. So my entire travel adventure would cost $370, way more than I wanted to spend.

I hovered over travel comparison sites for a week, waiting for the price to go down, but it never did. So I started visiting the websites of other airlines that weren’t included in the travel sites I was using. These airlines included JetBlue, Southwest, and the dirt-cheap Allegiant Air, which doesn’t seem to advertise at all.

Lo and behold, Southwest had the cheapest fare. But I still had one more thing to try.

Tip #3: Nearby airports can be your friend
Some airlines offer you cheaper prices for flying from small nearby airports. If you’re near one such airport, it’s worth looking into.

Oregon is a big state. I couldn’t really believe that it only had one major airport. I started playing around with airline comparison site Sidestep.com. What if I flew directly from Ashland to Denver? Did airlines do that?

It turns out that southern Oregon does have another airport, near Ashland in the city of Medford. American Airlines flew out of Medford. And, oddly, it was $40 cheaper than flying from Portland to Denver on the cheapest airline, Southwest. I would actually save money by flying from a smaller, more convenient airport.

The trade-off, of course, was my time. I had to fly through LA, with a 3-hour layover. But as someone who works online, I didn’t mind spending more time in transit, as long as I could get an Internet connection at the airport.

Tip #4: Booking early doesn’t always give you the best deal
Sometimes you can get a cheaper flight by booking it later. It’s worth checking out if you have flexibility.

If I’d booked my flight three days before starting my trip, it would have cost $209, thanks to airlines’ weird price fluctuations. I ended up booking a flight for $160, four days before I had to take it. So much for booking two weeks ahead, or whatever that rule of thumb is.

Tip #5: Time Your Trip for Fare Sales
If you’re a true cheap-flight junkie, you won’t time your vacations around the time that everyone goes. Instead, you’ll time them around fare sales.

I flew to Hawaii in April 2010 for around $700 round trip. At the beginning of August 2010, Alaska Air came up with a dirt-cheap fare sale to Hawaii. Round-trip fares between Portland and Honolulu, for example, added up about $318 with taxes. With a cheap round trip flight from Denver to Portland, I could get to Hawaii for about $450. That’s much, much cheaper. Waiting for the off-season, or an airline promotion, pays.

If you want to stay afoot of such promotions, subscribe to an airline comparison website’s automatic email updates. I use SideStep.com, which emails you when fares go below a fare that you set.

Honorable mention: Fly Mid-Week
In general, you can land a cheaper fare if you fly on an off-day, like Wednesday or Saturday morning, than if you fly when everyone else does.