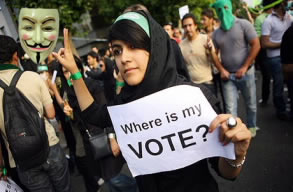 As anti-government protestors clash with Iranian government officials over the re-election of Mahmoud Ahmadinejad, the internet has been buzzing with reports of violence against protestors supporting Mir Hossien Mousavi, the presidential candidate declared the elections loser.

Prior to the elections many, including residents of Iran, believed the political process would work and Mir Hossien Mousavi would be declared the winner. Many voters opposed a second term of President Ahmadinejad, and by the amount of support Mousavi had, it was believed internationally that Iran would have a new ruling power. However as results came in, it became apparent the election was rigged. President Mahmoud Amedinejad was declared the winner, which set off a string of protests throughout Iran.

Social Media and Social Networking have come to play a huge part in getting out information about the protests. Not only is information being spread to people participating in the protests in Iran, but an international theatre has been set for the entire world to see using the internet. People in Iran went to using tools such as Twitter and Facebook. Once the government caught on, they began to shut down and filter the networks.

Anonymous joined the game. “Anonymous” as the group is called has no leader, no structural hierarchy, but is somehow organized. Made up of every possible profession to include even hackers and business professionals alike, Anonymous has proven in their fight against Scientology, that they are a force to be reckoned with. “Anons” as they have come to be known started Tweeting open Iranian proxies, as well as started a forum http://iran.whyweprotest.net offering advice and help to Iranian protestors as how to surf securely and avoid censorship. They are also telling Protestors to turn off their cell phones as the government can track them via BT antenna, find, and arrest them later. A link was also posted of proxies that the Iranian Government is using to get around their own firewalls.

Anonymous is not going to pull any punches, they have never done so. Under the guise of Anonymity, their numbers are strong. Cells of Anonymous are willing and prepared to fight this fight, they do not let tyranny go un-punished or unreported.

Many journalists and US supporters of the protests have reported they have been threatened by the Iranian government. Since “Anons” are “Anonymous” and they know how to remain that way in the digital world, if they stick to their guns, we can see a whole new digital revolution, one that just might help change the world.