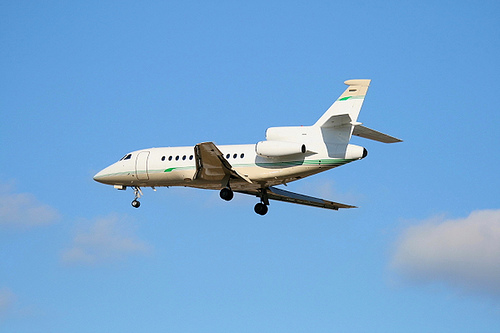 Beleaguered Citigroup is upgrading its mile-high club with a brand-new $50 million corporate jet – only this time, it’s the taxpayers who are getting screwed.

Even though the bank’s stock is as cheap as a gallon of gas and it’s burning through a $45 billion taxpayer-funded rescue, the airhead execs pushed through the purchase of a new Dassault Falcon 7X, according to a source familiar with the deal.

The French-made luxury jet seats up to 12 in a plush interior with leather seats, sofas and a customizable entertainment center, according to Dassault’s sales literature. It can cruise 5,950 miles before refueling and has a top speed of 559 mph.

Citigroup decided to get its new wings two years ago, when the financial-services giant was flush with cash, but it still intends to take possession of the jet this year despite its current woes, the source said.

Someone needs to track every cent of money given by the government to bail out banks. Citi may have been able to afford a new jet a couple of years ago, but it makes no sense at all to purchase one now.

I’m glad I recently canceled my account with them (for different reasons, but this confirms my decision).