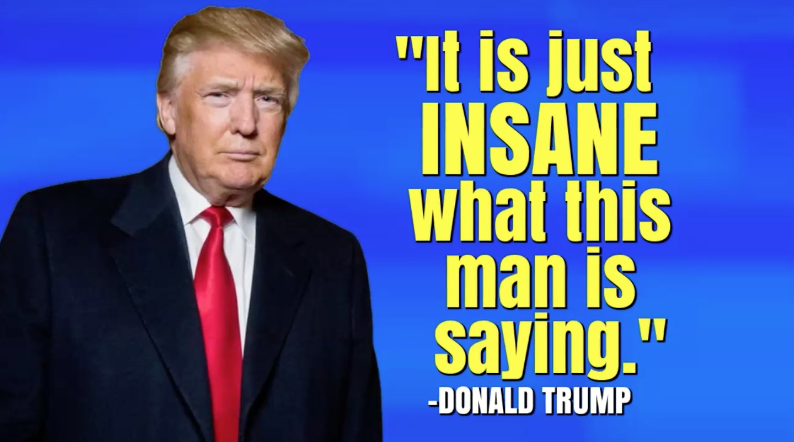 Donald Trump appeared on “Fox & Friends” on Monday morning and he ripped into President Obama for saying the US will continue to accept refugees, even following the terrorist attacks in Paris and Brussels.

During an address over the weekend, Obama said America’s “openness to refugees fleeing ISIL’s violence” is an important weapon in the US arsenal for fighting violent extremism.

“Our most important partners are American Muslims,” Obama said. “That’s why we have to reject any attempt to stigmatize Muslim-Americans and their enormous contributions to our country and our way of life.”

Trump immediately called Obama’s comment’s “disgraceful” and then continued his pursuit to strengthen US borders.

“It is disgraceful that he could say this, and especially when he talks about coming in from the Middle East, frankly even more so, where they’re undocumented, we have no idea where they come from, we have no idea who they are … It is just insane what this man is saying.”

Trump was then asked what he thought about the comments Secretary of State John Kerry offered over the weekend. “Everywhere I go, every leader I meet, they ask about what is happening in America,” Kerry said. “They cannot believe it. I think it is fair to say that they’re shocked.”

Trump said he was “shocked” that Kerry would help broker a deal between Western powers and Iran, which allowed sanctions relief in exchange for restrictions on Iran’s nuclear program.

“I’m shocked by him,” Trump said. “And I’m shocked that he would sign a deal like the Iran deal, which is one of the worst and dumbest deals I’ve ever seen negotiated, a horrible, horrible embarrassment deal.”

Trump didn’t stop there, attacking Kerry for all of his policies:

“I’m shocked by just about everything that he’s done and everything that President Obama has done. It’s leading this country down … In terms of security, this open-door policy is catastrophic, and it’s going to lead, I mean, you talk about downfall. This could lead to the downfall of the greatest nation on earth.”

Here’s part of the audio from Trump’s interview.