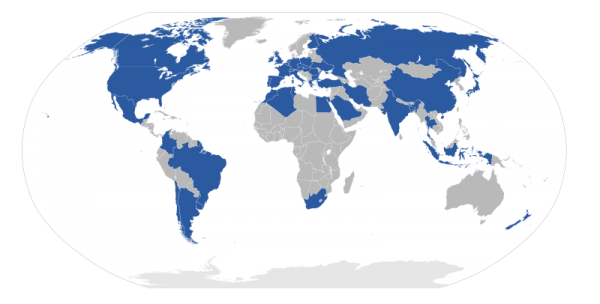 Danone truly is globalized dairy: every country with one or more Danone factories is in blue on this map. Image: Cervaugenie/Wikimedia

The Dannon Group, a subsidiary of French dairy giant Danone Group, has to pay the US government $21 million for making unsubstantiated health claims about its DanActive and Activia brand yogurts. Dannon’s claims that its products could prevent common illnesses and promote regular digestion aren’t as scientifically far out as, say, POM Wonderful’s bizarre claims that their juice helps erectile dysfunction, but the army of 39 state attorneys general who made this case happen don’t think it’s enough. From the New York Times:

As part of a long-running national advertising campaign, Dannon had asserted that a single daily serving of its Activia yogurt could ease irregularity and that its DanActive dairy drink could reduce a person’s likelihood of catching a cold or getting the flu.

Dannon said it had scientific evidence to back up its assertions but the Federal Trade Commission said Wednesday that Dannon lacked sufficient medical evidence to make those claims. The trade commission said it had worked with 39 state attorneys general in its investigation and Dannon has agreed to pay $21 million to those states to settle the charges.

The Federal Trade Commission said Dannon will no longer be allowed to make such health claims unless they are approved by the Food and Drug Administration – even though the commission noted that such review is not typically required. The requirement, the trade commission said in the statement, “will give Dannon clearer guidance going forward, and help ensure that it complies with the settlement order.”

Dannon sells six million cups of yogurt per day around the world, writes the Times. If Dannon doesn’t follow the rules, this means big money for the government.

I’m not sure where the FTC draws the line for scientific accuracy–enough studies have been done on both Danone brands and probiotics in general that the health claims, while exaggerated, probably didn’t qualify as blatant lies.

But I am starting to see a trend around regulation of the previously-unregulated health foods and supplements sector. For state and federal governments hungry for dollars, squeezing fines out of these billion-dollar industries will provide a handy, if time-consuming, economic boost. The nice thing about this particular brand of regulation-for-money, as opposed to some others, is that it encourages activities that benefit consumers, too, eg. truth in advertising.

Let’s see who they go after next.