This is a guest post by Robert Barr of BlabrMouth. 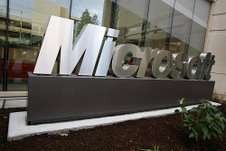 The scene: a nondescript office campus in the Seattle suburbs. It’s long past midnight but headlights from a late night coffee run enter the parking lot while assistants and interns scramble about inside.

In a large conference room that appears to have been the scene of many a recent strategy session, pizza boxes and Starbucks cups overflow a single trashcan in the corner of the room. The whiteboard is littered with numbers so large and formulas so complex that a team from NASA will be needed to calculate the totals. A few remaining people surround the conference table while one man stands at the head and listens to each point and counter-point.

If you guessed the company in question is Starbucks trying to figure out a way to sell us $4 lattes again, you’re wrong. The coffee run should have been a clue.

If however, you said Microsoft, then you are correct. But what’s keeping Steve Ballmer up on this night?

1. Steve and team are deciding on a real drop dead date to kill off XP
2. Steve is signing off on an ad campaign to counter Apple’s…that works
3. The team is finalizing the details for Bill Gates return to Microsoft to save all the softies from mass extinction
4. Steve is evaluating another bid for Yahoo
5. None of the above

While all could be true, the correct answer is E, or none of the above.

So what is it, you ask? The answer is going to require you to suspend disbelief from this point forward. We all know (thanks to Apple) that the Windows Vista adoption has been quite unimpressive. In fact, Vista has been so disappointing that Microsoft continues to keep XP on life support.

This leads me to my point

The release of Windows 7 will be make or break for Steve Ballmer. It will be Steve who takes the accolades or the arrows for this launch.

Sure, Gates still hangs around the place like the crazy old uncle that stays too long at Thanksgiving, but Windows 7 is Steve’s baby. This is why he should do something completely unheard of at Microsoft. Something so outlandish, it borders on insanity.

Give Windows 7 away for free!

That’s right, give it away. Microsoft has spent the better part of ten years trying to fashion themselves after Google, while Google in turn has been zeroed in on Microsoft Office.

We are all aware that Google is the king of online advertising. Microsoft has wanted to compete in that space forever, which is why giving away Windows 7 makes so much sense. Let’s look at the numbers; Microsoft’s operating systems are on 90% of the world’s computers, or roughly one billion machines. That’s penetration on a massive scale. Even Google has to be impressed.

So give Windows 7 away for free as an ad-supported operating system using the Microsoft Ad Center network. That would mean Microsoft serves ads on a billion machines versus the twelve people that currently use MSN. Besides, free is an incredibly seductive word to IT departments, who just had their wishlists pushed back two years in the wake of the recent financial meltdown. Just in time for the launch of Windows 7!

Point being, Microsoft generated $17 billion in profits last year selling software the same way they have for 30 years. During that same time Google made $4 billion and has been developing an ad-centric operating system that will not only compete, but dominate if Microsoft doesn’t market software differently than they have in the past.

Is this model possible? Can Microsoft adopt an ad based operating system and make it work? Do you think it’s even up for discussion out in Redmond? The whole idea makes me think of the line from A Christmas Carol when Scrooge asks the ghost of Christmas future; “are these the shadows of the things that will be, or are they shadows of things that may be, only?”

Robert Barr is tired of the way business news is presented to the general public. With all the spin doctoring and screen testing, no one says anything anymore. Blabrmouth.com is the melding of business news and one man’s opinion.