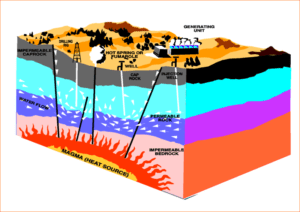 While traditional geothermal energy relies on finding natural pockets of hot water and steam, EGS fractures the hot rock, circulates water in its system, and uses the steam created from the process to create electricity in a turbine.

Since energy generation isn’t limited to locations with packets of steam and hot water, EGS has the potential to be used anywhere on earth and hence could be especially beneficial for developing countries.

“EGS could be the ‘killer app’ of the energy world,” Dan Reicher, director of climate and energy initiatives for Google.org, said in statement. “It has the potential to deliver vast quantities of power 24/7 and be captured nearly anywhere on the planet. And it would be a perfect complement to intermittent sources like solar and wind.”

This is yet another sign that the Green Revolution is officially underway. Renewables are getting the financial infusions they need to go from sluggish ideals to momentous changes.

Here are a few more corporations behind green (a category currently including natural gas and nuclear power) projects:

—Clean Energy Group, run by none other than T. Boone Pickens, is investing $10 million to launch a paratransit vehicle and taxi that runs on natural gas. Pickens himself donated an extra $10 million to the fund, which is being given to the Vehicle Production Group, LLC.

—PG&E is jumping through regulatory hoops to build “WaveConnect,” an ocean wave energy plant on northern California’s Mendocino coast. It’s limited by how much it can charge ratepayers to fund the project, however.

What will the future of corporate energy look like? Will it inspire hybrid companies, such as Google: Search Engine, Media Company, Geothermal Power Provider? Where will Big Oil redirect its efforts when oil becomes a bad economic proposition? Will there be Conoco Natural Gas Stations?

Only time will tell…