If 2010 gifted you with a spare tire of the corporeal kind, welcome to the club. More so if you want to work and diet that extra weight off. Every year, Americans spend billions trying to cultivate a decent figure.

In that sense, Doug Logeias is a typical American. Tired of his old appearance, this San Diego day spa manager and aspiring motivational speaker decided to lose weight one day. What makes him stand out is how he did it.

Like most dieters, Doug started an intense exercise regimen and went on a restrictive diet. That diet, however, came from a place many dieters avoid like the plague: McDonald’s. Doug’s intense 30-day diet “was like the Benjamin Button version of Supersize Me,” Doug told me in a recent interview. By the end of the month, Mickey D’s had helped Doug lose an impressive 15 pounds. 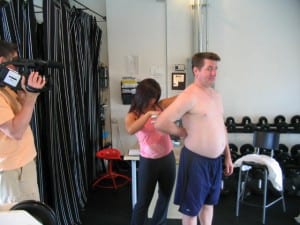 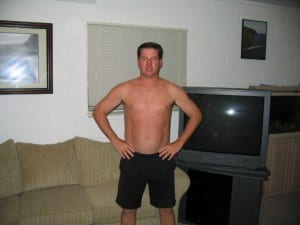 Doug’s choice of weight-loss methods had an entrepreneurial slant. Jared Fogle, the overweight man who escaped obesity by eating only Subway food, paved the way for a new kind of fast-food spokesperson, a sort of independent contractor who, after experiencing success with their food experiment, gleans company support and sponsorship. More recently, a woman named Christine lost 54 pounds on a diet including Taco Bell’s Fresco menu.

Doug wanted to prove, among other things, that he could lose weight eating food served by what is perhaps the most demonized fast food restaurant in the country. He hatched a plan to turn his weight loss “adventure,” as he calls it, into a documentary. He envisioned writing a weight loss book. He even landed an appearance on the Rachael Ray show in New York.

There was only one problem: McDonald’s. Despite Doug’s repeated attempts to garner their support, the company remains nonchalant. “McDonald’s always said ‘it’s our policy to remain independent of your project,’ and good luck to you, and that’s the end of the story,” says Doug.

Despite continued company resistance, Doug is still championing his cause. He is full of promotion ideas, including a 30-day weight loss challenge where Doug, Subway’s Jared and Taco Bell’s Christine are pitted against each other, Biggest Loser-style.

Although his biggest potential supporter remains passive, Doug is tenacious. I talked to Doug to learn more about his efforts, McDonalds’ attitude, and where he’s going from here.

BP: So you started your McDonald’s project independently, then contacted the company. Is that what Jared from Subway and Christine from Taco Bell did, too?

Exactly. Jared was a really fat guy who found healthy food at Subway. He never thought that this kind of sponsorship would happen to him, I’m sure. Christine ate other food besides Taco Bell and did other exercise. Their companies picked up on it later and said hey, thanks for the positive message and we’ll throw a couple of bucks at you.

Obviously Jared at Subway and Christine at Taco Bell have made a positive name for their companies and have tried to highlight the positive food they are eating.

And they said to me…nothing. They want to remain independent from my project.

McDonald’s has a policy of not getting involved. Apparently, some other people also had some level of success eating at McDonald’s and losing weight, the way I did. But McDonald’s has always said “it’s our policy to remain independent of your project,” and good luck to you, and that’s the end of the story.

There’s more. When the Rachael Ray crew came to San Diego to film the show I was in, there were so many phone calls and arguments with lawyers. We couldn’t have the McDonald’s logo on TV. That meant we couldn’t have a bag or a box that said McDonald’s, no golden arches anywhere. When I was on the show, there was just the food. We could talk about it, but they wouldn’t let any product image appear on TV.

It was one of those things like “we have to protect our company and our interest.” I was like, whatever dude, protecting what? I’m helping you, you should be thanking me. When I was on the Rachael Ray show, I promoted McDonald’s healthy food. I had a very positive message for them. The publicity from the show even went global. But I didn’t get a single dollar for what I did.

BP: So you’ve been in contact with McDonald’s for a while?

Yes. Their corporate stance and position hasn’t changed, so I don’t see reason to mention anyone’s name I’ve been in contact with at corporate.

Ernie wants to be supportive, but the corporate McDonald’s in Illinois said he’s not allowed to do. It doesn’t fit under their umbrella policy that they’re not allowed to participate with someone like me, who does something independently.

The people down here mentioned it to corporate. Corporate came down here to talk about it. The San Diego franchisers said “this guy is helping is helping us, and I can’t believe you’re telling me we can’t use him.” But ultimately, if you own the franchise, you have to play by their rules. The people down here didn’t give up, they just sort of gave in for now. So I have 18 McDonald’s down here who are supportive. They want to participate, but they’re not allowed to.

BP: Are you still going to put out the documentary?

I’ve been doing this for a year now. It takes a long time to try to complete something like this. I need more footage. I need more to add to this project.

I’m still trying to promote as much as possible. A couple of months ago, when the Taco Bell thing came up, I thought well, this is a perfect time for my challenge. My idea was that if we had a promoter and someone behind it to make it a big thing, it would be me and Jared and Christine pitted against each other.

I would love to have all three of us on a national stage somehow, like The Today Show or a mini-Biggest Loser, and see who can achieve the most success over the course of 30 days. We’d engage the public by having them follow their “favorite” competitor, food and restaurant.

At the end…I know what I did in 30 days. It’s not easy. And eating every day at the same restaurant, I think that’s where the other two might falter.

I want to see if Jared and Christine, who are widely known as being spokespeople for their company, can accept the challenge and really stand behind their product and their company.

BP: Would you choose McDonald’s again?

I’m not sure. I’m surprised and disappointed. McDonald’s is a global name, so in that way, they helped me gain attention for my project. On the other hand, it was extremely difficult to give interviews and go on TV with a big smile while promoting and supporting a company that didn’t support me.

Would I choose them again? It’s a tough one. Knowing what Jared got from Subway and what Christine got from Taco Bell, yeah, I feel I was kind of cheated a little.

I’m always hopeful that one day McDonald’s corporate will think that this is a good idea, that this is helping them. They might not give a nod of approval, but it won’t be a hurdle either. I’m not going to stop. I’m going to keep moving forward.

Doug Logeias blogged his weight-loss experience at McDoug.net. He also recently completed his Certified Personal Trainer (CFP) certification. You can see his appearance on the Rachael Ray show here. Contact him at douglogeais AT yahoo DOT com.