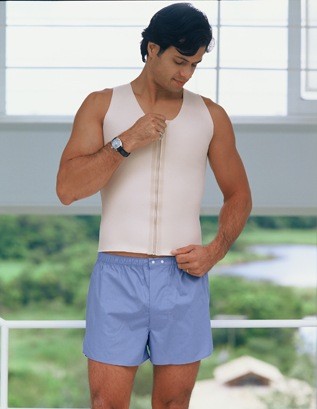 The Wall Street Journal reported this spring that men were wearing girdles. Man girdles, or mirdles, are marketed as body-shaping underwear, exercise wear, shapewear, bodywear – even support boxers. Elasticized, supportive undergarments for men are turning up all over.

According to the article sales of men’s underwear in the U.S. is up almost 8% percent from 2005. By contrast, women’s underwear saw a mere 2.3% during the same period.

Retailers say a younger generation of men is more open to wearing body-sculpting undergarments today than their fathers were. But for men to wear girdles actually isn’t a new phenomenon. In the early 19th century, some fashionable men in England were known to wear them. Drawings circulated in high society at the time portrayed men as dandies laced up in corsets. In 1899, an ad for Madame Dowding, a ladies’ corsetiere in London, also advertised versions for men, including a model called “The Marlboro.” In high fashion a century later, avant-garde designer Jean-Paul Gaultier created some corsets for men in the late 1990s.

Today’s men have been eased into the mirdle idea with ever more tight-fitting shirts and compression shorts worn during athletics for circulation and aerodynamics. Demand for slimming undergarments follows fashion trends.

“In men’s clothes right now, slim is in — everything has a much more fitted silhouette, from the tapered leg to narrow dress shirts,” said Richard Gualtieri, director for men’s fashion merchandising at Lord & Taylor. He notes that men have been seeking out more figure-hugging underwear, where “there’s some stretch to it that helps lift and keep things in place a little bit more.”

In Japan, Wacoal focuses its marketing message on the product’s health benefit. They claim the fabric and construction help the wearer’s muscles work harder while walking. Right. However, this may be a successful tactic. Presumably, any product is going to rely on word of mouth to some degree, and what would you rather brag about – your flabby belly solution or your rippling muscles to be?