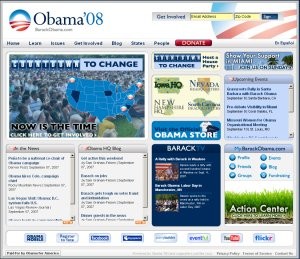 The divide between presidential candidates John McCain and Barack Obama doesn’t end with years and ideology. It also exhibits itself through the Internet. According to an MIT Technology Review article written by David Talbot, Barack Obama has managed to create the best online political machine the nation has ever seen. John McCain, on the other hand, doesn’t use email.

Highlights from the article:

Many of the 2008 candidates had websites, click-to-donate tools, and social-networking features. But the Obama team put such technologies at the center of its campaign–among other things, recruiting 24-year-old Chris Hughes, cofounder of Facebook, to help develop them.

(During the crucial Texas primaries), 104,000 Texans had joined Obama’s social-¬networking site, www.my.barackobama.com, known as MyBO. The month before, the freshman senator from Illinois had set a record in American politics by garnering $55 million in donations in a single month.

McCain’s site is ineffectual for social networking. In late June, when (the author) tried to sign up on McCainSpace–the analogue to MyBO–he got error messages. When he tried again, he was informed that he would soon get a new password in my in-box. It never arrived. “His social-networking site…was very insular, a walled garden. You don’t want to keep people inside your walled garden; you want them to spread the message to new people.”

Social networking has already proven itself to be the early 21st Century’s great equalizer. Could it effectively be expanded to the White House? I hope so.

I also hope that big corporations like GE and AT&T embrace social networking as a means to dialogue with their customers. Can you imagine a customer service desk where issues and solutions are displayed on Twitter? Or a government that networks in its citizens above and beyond sterile updates?

It could be a different world. But in the meantime, it’s all about politics. Talbot covers it best: