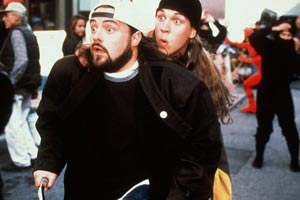 Kevin Smith, best known for directing Chasing Amy and as Silent Bob in Clerks, was kicked off a Southwest Airlines flight this weekend for being a man of size. The Wall Street Journal reports:

Filmmaker and actor Kevin Smith…was reportedly ejected from a Southwest Airlines flight scheduled to travel from Oakland to Burbank on Saturday evening because he was too overweight to fit in the seats.

“I broke no regulation, offered no ’safety risk’ (what, was I gonna roll on a fellow passenger?)” Smith tweeted on his Twitter page about the incident.

Smith apparently got on another Southwest flight after being bounced from the first one. “Dear @SouthwestAir, I’m on another one of your planes, safely seated & buckled-in again, waiting to be dragged off in front of the normies,” he tweeted.

According to the Southwest Web site, “Customers who are unable to lower both armrests and/or who compromise any portion of adjacent seating should proactively book the number of seats needed prior to travel.”

Smith later claimed he could prove that he fits into two Southwest Airlines seats. The airline isn’t interested in Smith’s offer.

On his Twitter page, Smith said he could fit in the seats and offered to prove it on national television. But Brandy King, a spokeswoman from Southwest, told Speakeasy this morning that “We most likely will be declining that request.” King said that “obviously, whether or not he can fit into the seats is a matter of interpretation.” She added that the airline had already apologized to Smith.

In a statement, the company said that Smith had originally bought two tickets on a flight from Oakland to Burbank but then decided to fly standby on an earlier flight. There was only a single seat available for the director on the new flight. “Our pilots are responsible for the Safety and comfort of all Customers on the aircraft and therefore, made the determination that Mr. Smith needed more than one seat to complete his flight,” the company said in a statement.

Smith, on his Twitter page, disputes any claim that he bought two tickets for the original flight because he is overweight. “I said I only needed one seat & that I didn’t buy an extra seat because I’m fat (which I am), but because I’m anti-social and didn’t want to sit next to someone & possibly have to make convo (in person, I’m very shy),” he tweeted.

Smith’s Southwest incident was perfect for opening a public dialogue about what it means to be “2 fat 2 fly.” If Southwest maintains its distance, somebody in the media needs to put on a show featuring overweight people, tall people, and anyone else who has trouble sitting in or next to a seat that’s over the airline’s definition of capacity. Such a show could open a marketing space for a company that does have extra room in its seats.

I personally think that airlines build the seats they do to maximize the utility of the aircraft. I’ve learned to expect very little from most carriers in terms of economy-class comfort. Therefore, I don’t think this is Southwest’s problem–Southwest is just acting like any business-minded carrier. I do think, however, that it’s about time people talked about this issue openly. It could be that some carriers just have better seats. It could also be that airlines need to allow some people to have discounted double seats for medical reasons. The best thing that can come out of this is dialogue.