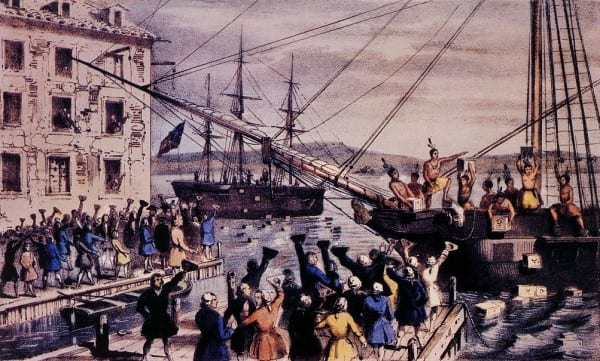 Today’s Tea Party phenomenon left me scratching my head. On the one hand, I’m appalled at the mountains of money being moved during the bailout process, and question the legitimacy of the entire process. If the Tea Parties had specific agendas relating to, say, auditing the Fed (a Ron Paul initiative) or kicking out Tim Geithner, I’d attend.

However, I don’t see what Barack Obama’s middle name, God, or Fox News have to do with the problem. The Tea Parties look like the same populist rage most people feel, but branded to fit neocons and libertarian sentiments.

In the influence economy, groups who want more power use common sentiments as biased platforms. This is what’s happening with the Tea Party, which could in fact be a unified forum. Instead, from what I’m reading online and in the MSM, it has become an outlet for frustrated conservatives, and an excuse for liberals to mock them.

The best take on the Tea Parties I found was in an InfoWars post by Harold Gray. I found the article idiosyncratic, but liked this excerpt:

We just witnessed the liberal, anti-war, anti-Patriot Act movement, co-opted by the slick packaging of hope and change, coupled with Obama’s cult of personality. Another predictive programming operation has now been implemented in order to imprint a false neo-conservative overlay over the growing liberty movement. This will trigger a negative auto-response by those unaware of the neuro-linguistic keywords used by the media to falsely label the movement, thus preventing the next crucial growth period from happening.

The liberal newspapers and blogs are playing the part by going after their predetermined enemy, but now categorizing the Tea Party movement as a pathetic swipe against Obama by the right. I do agree in some sense that the failed and discredited republicans are basing these events around attacking Obama, while ignoring issues such as the private Federal Reserve system.

The problem is that the Orwellian newspeak media has left out the fact that the Ron Paul Tea Parties started under the Bush administration, and were not focused on attacking Bush, but instead were exposing the unconstitutionality of the Fed, IRS, NAU, Patriot Act, NAFTA, wars for empire and the list goes on. Our enemy is not a politician, political party or pundit, it’s the corporate governmental mechanisms of control that expand no matter who is in office.

But the corporate governmental control mechanism doesn’t have a name or face, does it? It’s the fabled “system.” So the same political game keeps replaying. GW Bush’s administration coopted the swelling sense of patriotism after 9/11, then twisted it: If you were a patriot, you were for the Iraq War; if you against the Iraq War, you weren’t into America. Obama coopted the national need for change, branded and marketed it, while keeping an old failed financial system afloat.

I’d like to see something more substantive than “Obama is a socialist,” “To Hell With the Left,” “Teabagger party,” and “anti-intellectualism” (critiques from the right and left, respectively). I want to see bipartisan acknowledgement that the Obama administration is doing things wrong, and that some change just isn’t happening.

Name-calling ain’t gonna do the trick.