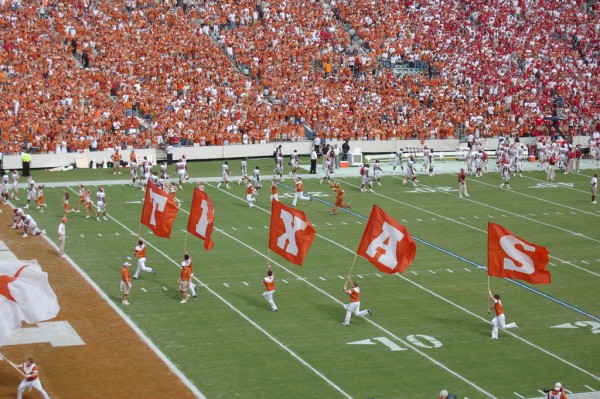 Move over, Notre Dame. ESPN just inked a 20-year, $300 million deal for a new 24-hour Longhorn network. ESPN has more about the network, which will feature 3 hours of non-sports broadcasting per day:

ESPN will help develop, launch and operate the network, according to a news release. The deal is worth $300 million over 20 years. The network will launch in September.

In addition, there will be university news, coverage of lectures and visiting speakers along with commencement ceremonies, and even high school coverage on an authenticated online/broadband site.

Texas already has overlapping football rights via the Big 12’s television contract, meaning ESPN will shell out something like $15 million a year for one, perhaps two Longhorn football games and make up the rest on basketball and the relatively paltry revenue from other sports. How will this work? That is a very good question, and fortunately for the Longhorns that is not Texas’ problem. They’re the ones who just get to roll in their estimated $137 million athletics budget for the year 2010-2011, which just got fatter at the margins for future years thanks to ESPN’s largesse.

In comparison, the total budget for Big 12 competition Iowa State came to $45 million for the 2008-2009 year. In the arms race of athletic spending in the Big 12, Texas is clearly the United States, and everyone else is just hoping they don’t invade.

Texas was considering the move to the Pac-16 to boost its television revenue. Instead, it stayed in the Big 12 for even more television revenue. While a Pac-16 was attractive, the rivalries of the Big 12 and its contract with ESPN-ABC and Fox, along with the additional revenue of the Texas-only network, are more lucrative.

But the underbelly of this thing is not as pretty.

First, there’s the journalistic question. Nobody pretends ESPN is the most objective news outlet in the land, but how can it report objectively and accurately on an institution with which it has such a cozy financial relationship?

Second, where does this leave every other major university in America? Before this, schools reaped the benefits of major network sports deals and shared the revenue….Now, major programs such as Ohio State, Michigan, USC and most of the SEC will wonder where their ESPN deal is.

Bottom line: In college football, everyone follows the money. It’s more lucrative for ESPN to carry one popular team with a heavy alumni following than to feature, say, Colorado one week, Nebraska the next, and rotate from there. UT gets serious moola. And that is what the conferences and bowl games are all about.