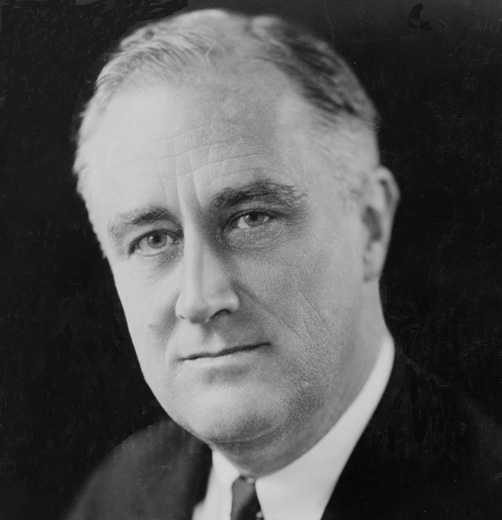 I love a good conspiracy. This one, involving Great Depression-era businessmen attempting to overthrow President Roosevelt in a military coup, just about beats them all:

In the summer of 1933, shortly after Roosevelt’s “First 100 Days,” America’s richest businessmen were in a panic. It was clear that Roosevelt intended to conduct a massive redistribution of wealth from the rich to the poor. Roosevelt had to be stopped at all costs.

The answer was a military coup. It was to be secretly financed and organized by leading officers of the Morgan and Du Pont empires. This included some of America’s richest and most famous names of the time:

* Irenee Du Pont – Right-wing chemical industrialist and founder of the American Liberty League, the organization assigned to execute the plot.
* Grayson Murphy – Director of Goodyear, Bethlehem Steel and a group of J.P. Morgan banks.
* William Doyle – Former state commander of the American Legion and a central plotter of the coup.
* John Davis – Former Democratic presidential candidate and a senior attorney for J.P. Morgan.
* Al Smith – Roosevelt’s bitter political foe from New York. Smith was a former governor of New York and a codirector of the American Liberty League.
* John J. Raskob – A high-ranking Du Pont officer and a former chairman of the Democratic Party. In later decades, Raskob would become a “Knight of Malta,” a Roman Catholic Religious Order with a high percentage of CIA spies, including CIA Directors William Casey, William Colby and John McCone.
* Robert Clark – One of Wall Street’s richest bankers and stockbrokers.
* Gerald MacGuire – Bond salesman for Clark, and a former commander of the Connecticut American Legion. MacGuire was the key recruiter to General Butler.
* Prescott Bush — Wall Street executive, US senator

The plotters attempted to recruit General Smedley Butler to lead the coup. They selected him because he was a war hero who was popular with the troops. The plotters felt his good reputation was important to make the troops feel confident that they were doing the right thing by overthrowing a democratically elected president. However, this was a mistake: Butler was popular with the troops because he identified with them. That is, he was a man of the people, not the elite. When the plotters approached General Butler with their proposal to lead the coup, he pretended to go along with the plan at first, secretly deciding to betray it to Congress at the right moment.

It reads like a hoax, but was it? I’d like to hear from history buffs regarding the veracity of this story.

I also found the story pertinent because the government is engaged in its biggest economic rescue since FDR. If high-powered politicians and businessman were able to band together in an attempted coup then, what’s stopping them now? Better surveillance, perhaps? A more centralized government?