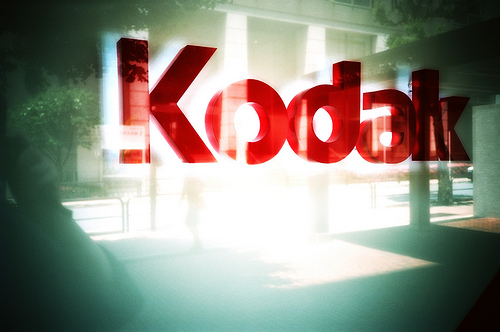 Though founded in 1888, this illustrious photo firm hit peak stock prices of over $80 a share in 1999. With stocks down to 78 cents a share by 2010, it may seem like the demise of Kodak is a recent thing, but they’ve been failing to adapt for at least half a century. Kodak’s original business model involved selling consumers on quality, giving away their cameras, and in turn getting them hooked on the money-making photo developing process. This was great, but was started to become threatened as early as 1948, with the advent of instant photography. Kodak knew they had to respond to the growing trend, and created their own instant developing camera in response to Polaroid. It was a knock off, however, and this was obvious, with Polaroid suing for damages from Kodak’s “theft” of their idea. In 1990 Polaroid won close to a billion dollars in damages. While this was going on, new competitors in the film space emerged, and took advantage of the growing mass distributors like Wal-Mart, who wanted mass produced and ever cheaper merchandise. Fuji undercut Kodak, and gained notice in the west by sponsoring large events like the 1984 L.A. Olympics. After having their share of the film industry taken from them, Kodak lost $1.2 billion and laid off close to 20,000 employees in 1999.

One of many glaring company mistakes came in the form of Kodak’s 1988 overpriced acquisition of Sterling Drug Inc. The idea was that drug research and Kodak’s own chemical production would go hand in hand. What they hadn’t vouched on was trying to understand and get ahead in a pharmaceutical business they didn’t know. Their options: either make super cheap generics, or undergo massive research costs for cutting edge drugs, and hope for a home run. Unfortunately they did neither, and sold the drug company off in pieces for a fraction of the cost.