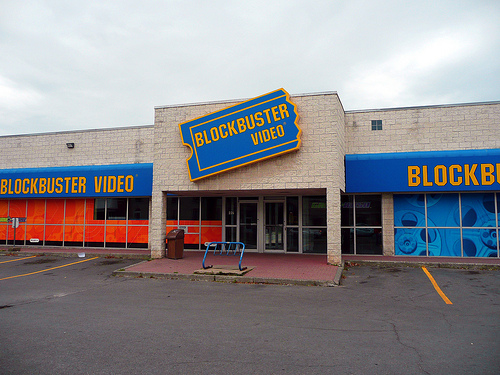 Blockbuster Video has a long and winding history. They saw some pretty extreme heights in their day, and through a series of blunders became obsolete. Blockbuster was founded by David Cook in 1985. By 1987 he had sold Blockbuster to a trio of investors for $18.5 million. Four years later Blockbuster was the undisputed leader of video rentals, and being bought by Viacom for 500 times the sum ($8.4 BILLION). The company went public in 1999, but this might have had less to do with its business strength and more to do with its steady cash flow from late fees. Which is exactly why the competition emerged. After obtaining a $40 late fee for Apollo 13, Reed Hastings founded Netflix. Blockbuster took in $800 million in late fees in 2000, and also declined to purchase Netflix (the anti-late fee competitor) for a mere $20 million. Blockbuster had instead decided to team up with Enron Broadband Services to roll out on-demand movies. When Enron filed for bankruptcy in the midst of an accounting scandal in 2001, this deal went away. By 2002 Netflix was public and rolling, while Blockbuster posted losses of $1.6 billion. By 2005 Blockbuster finally caught on that customers didn’t like late fees, but the cards were already set against them. Upon rolling out a “no late fee” campaign, Blockbuster was promptly sued by customers in every state for misrepresenting their policies to customers. By 2010 the company was worth just $24 million with $1.1 billion in revenue losses. Knocked out.

SEE ALSO:
The Ultimate Guide to Bedding: Improve Your Sleep

Like many of the companies on our list, whit is a truly exasperating tale of a cash-rich business with years and years in which to change the way they do things, and still failing. In 2004, Reed Hastings noted that “in the past 6 months, Blockbuster has thrown everything but the kitchen sink at us.” The next morning Reed Hastings receives a package from Blockbuster: a kitchen sink.