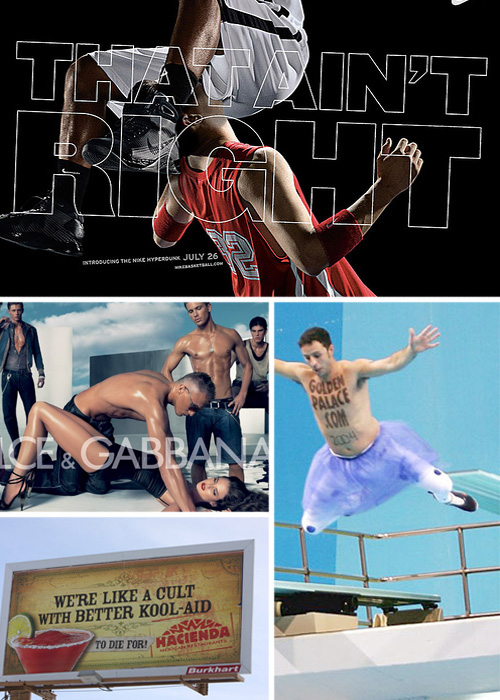 As long as there has been advertising, there have been advertising fails. From Thomas Edison electrocuting an elephant to guerrilla marketing bomb scares, we’re forced to wonder just what PR people are thinking at times. Here are 10 examples of backfiring advertisements that will have you face-palming whilst wondering if the phrase, “Any publicity is good publicity” really applies. 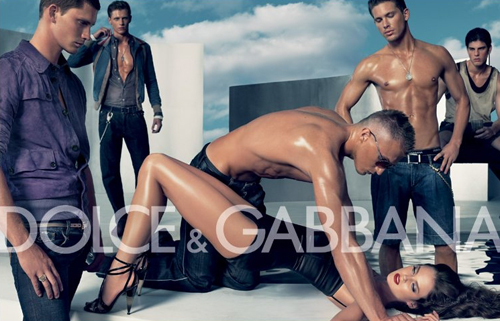 
In 2007, Dolce and Gabbana drew fire from feminists in Spain, where they debuted a new ad featuring a woman being held down by a man while four other men looked on. Claiming that the image glorified sexual violence, the ad eventually garnered international protest. The president of NOW called it “stylized gang rape”, and politicians from several different countries resolved to have the ad pulled.

The fashion house complied, but said condescendingly: “We will withdraw that photo from the Spanish market alone, since they are behind the times. What does an artistic photo have to do with the real world?” They then went on to compare their tasteless photo to the great works of art in Museums such as the Louvre. Perhaps if they had read the newspapers that carried their ads, they might have seen the headlines detailing two horrific murders of women from the previous two months. Bad timing much?

Hacienda’s Kool-Aid Is To Die For 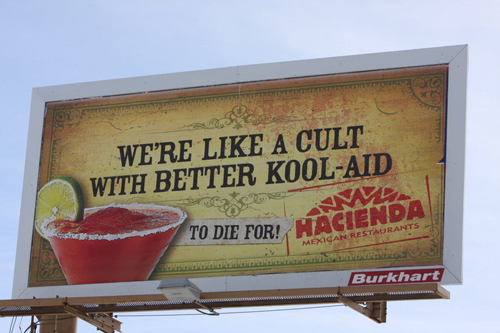 It stands to reason that advertisers would try to stay away from things like associating your business with a large suicide cult. Of course, trying to see reason in advertising is an exercise in futility, but some things should still be obvious.

Hacienda, a chain of Mexican restaurants in Indiana, decided to see if it could find the humor in the infamous Jonestown Massacre by creating billboards showing a mixed drink with phrases such as “We’re like a cult with better Kool-Aid!” and “To die for!”

After a resident of South Bend, Indiana complained, the company quickly backtracked and took down the offensive advertising.

KFC Underestimates the Power of Oprah 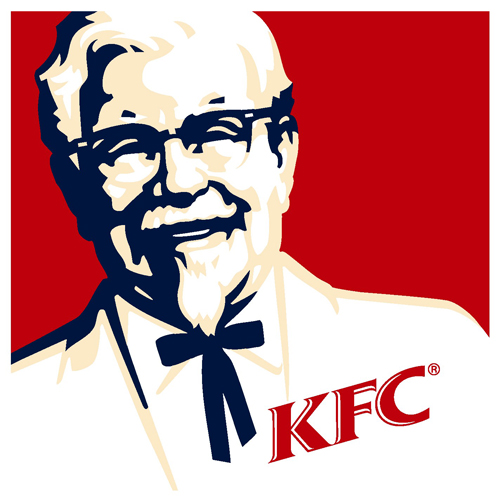 By now, we should all know not to underestimate the influence of Oprah. In her 20-year ascent to becoming a media powerhouse, her clout has grown exponentially. She can make any book a bestseller, nudge politicians into power, and make or break any consumer product that she deigns to notice.

When the power of Oprah was combined with the lure of free meal from KFC, all hell broke loose.

In 2009, the talk-show queen promoted an offer of a free two-piece grilled chicken meal from KFC, with a coupon that could be downloaded from her website. Additional promotion came from viral Twitter and Facebook trending, where word spread like wildfire. Within two days, KFCs across the country were overrun with hungry customers. An estimated 10 million people downloaded the coupon. KFC had to cut customers off and close early in some locations, completely overwhelmed by the demand. KFC, in a humiliating move, had to cancel the deal after the fiasco.

“Quick! Do Something Manly!”

In 2007, during Superbowl XLI, Mars Inc. debuted the first of two commercials that drew the ire of GLBT activists and advocacy groups. The commercial showed two mechanics, who get so wrapped up in eating the opposite ends of a Snicker’s bar, they end up smooching. To save their shredded masculine self-image, they tear off their shirts and rip out some chest hair — possibly not the best way to try and prove one’s heterosexuality, but that’s besides the point.

The alternative version of the commercial, circulated online, is what really set off activists: instead of ripping off their chest hair, the two mechanics pummel each other senseless. Judy Shepard, mother of Matthew Shepard responded to the ads by saying, “This campaign encourages the same type of hate that led to the death of my son Matthew. It essentially gives ‘permission’ to our society to verbally or physically harass individuals who are gay, lesbian or bisexual.”

Mars Inc. immediately backpedaled after the commercial’s debut stirred up controversy on the blogosphere and in the media, pulling the ad and issuing apologies for making light of violence against LGBT people. The company seemed to want to put itself back in the good graces of civil rights organizations and consumers alike.

This made their next slip all the more surprising. A new ad premiered in England in 2008, which showed Mr. T — envoy of all that is ‘manly’ in the world — shooting at an effeminate speed-walker and calling him “A disgrace to the man race!” 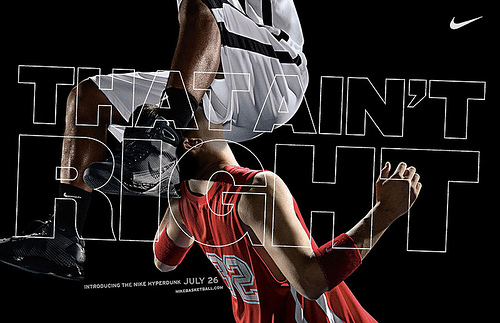 While Mars Inc. was being hounded for their commercials, Nike was drawing its own fire for its line of homophobic advertisements. Debuting in 2008, Nike’s print ads for its Hyperdunk sneakers depicted two basketball players in homoerotic poses, usually with one player’s crotch in the other’s face. Imposed over the image was a variety of phrases, including “That ain’t right,” and “Say Hello,” and most damningly, “Punks Jump Up,” a reference to a 1992 hip-hop single with anti-gay lyrics.

The company was taken to task by various bloggersand other critics. After briefly defending their strategy, Nike pulled the three offending images and issued a statement of apology.

This seemed to be the final straw, however, for LGBT activists, who were thoroughly sick of advertisements that used homophobia to sell products. As one activist wrote in an open letter to the advertising industry:

“Are you so bereft, of ideas and simple humanity, that you must be reduced to stereotyping and bullying? That you must identify an “other” to ridicule, or worse? That you must build a brand on the backs of people who have harmed no one save for challenging a high-school locker-room standard of masculinity?“

Another Superbowl, another offensive ad: In 2008, the marketing site Salesgenie.com premiered an ad — written by its founder, Vinod Gupta, no less — depicting two pandas as the proprietors of Ling Ling’s Bamboo Furniture Shop. The two pandas sport exaggerated Chinese accents, speak in broken English, and have misspelled signs in the shop. They connect with the Sales genie (another panda, wearing a turban and speaking with an American accent).

The story itself wasn’t the issue. The ethnic stereotypes were, and the commercial was called offensive by bloggers, and disappointing by Asian-American organizations. Much was also made of Gupta’s contributions to Hilary Clinton’s presidential campaign, in the lead up to the Iowa caucus. Gupta called the whole incident “a smear campaign”, but still pulled the ads off the air after the uproar.

“You’ve Got a Real Nice Look.”

It took only days for the manure to really hit the fan. Family-values groups like the American Family Association immediately organized protests and boycotts. Retailers threatened to drop the brand. The US Justice Department even investigated the fashion house on possible child exploitations charges, though nothing ever came to fruition. Klein gave an interview with Newsweek denying any possible pornographic connotations, but still pulled the ads.

Another rule for new media advertising: don’t piss off the Moms. Peter Shankman, a PR all-star, called Mom bloggers one of the “strongest-to-band-together-and-form-one-opinion-like-the-Borg collectives out there.”

In 2008, Motrin attempted to reach out to this demographic with a cute, snappy commercial, empathizing with hardworking moms that suffer for their dedication to their kids. The animated text video begins by saying “Babywearing seems to be in fashion,” then goes on to extol a few of its virtues: principally, that babies who are worn in slings cry less. “But what about me?” an animated mother asks. “Do moms that wear their babies cry more than those who don’t? I sure do.” It points out all the places on the body that are strained under the weight of a toddler, and even though it’s a “good kind of pain”, says that it can make moms look “tired and crazy.”

The Mom hordes went nuts on Twitter and in their blogs. An email-writing campaign began, a boycott was organized, and the ad agency that had created the video was overwhelmed. Days after it had debuted, the ad was pulled from Motrin’s website, and an apology was issued to all the Moms that had raised a ruckus. 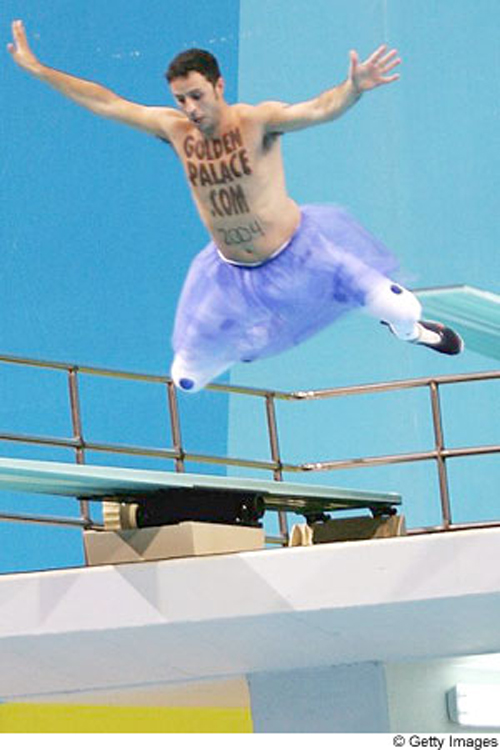 The recent rise in guerrilla marketing tactics has changed the way that advertising works, opening up whole new possibilities for companies to gain consumers attention.

It’s also created whole new ways for companies to insult and annoy consumers, from insulting people by name, or capitalizing on the popularity of graffiti. In 2004, during the Athens Olympia games, it earned one such advertiser a jail sentence. Ron Bensimhon was convicted on charges of trespassing and disturbing public order when he broke into the men’s synchronized diving event wearing a tutu, polka-dotted leggings, and the name of (who else?) online casino GoldenPalace.com on his naked chest. After screaming, “I love you!”, he bellyflopped off the 3m diving board. Despite his sentence, Bensimhon has since gone on to crash other events, including the British Open. 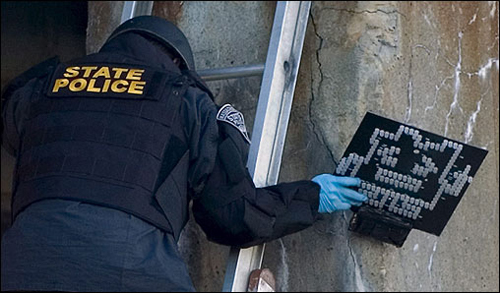 What is arguably the biggest backfire in guerrilla marketing came in January of 2007. Turner Broadcasting, producers of the Adult Swim program Aqua Teen Hunger Force embarked on a strangely subversive marketing ploy. They decorated the entire city of Boston with small, LED placards that depicted a character from the show. The placards, unfortunately, can look like IEDs to the untrained (AKA stupid) eye.

One such untrained eye spotted one of the displays above a stanchion on I-93, and called the police. The police shut down the interstate and showed up with an army of emergency vehicles to defuse the possible bomb. Other devices were found scattered across the Boston area, and parts of the city were shut down. It wasn’t until mid-afternoon that the devices were realized to depict a character from the popular cartoon.