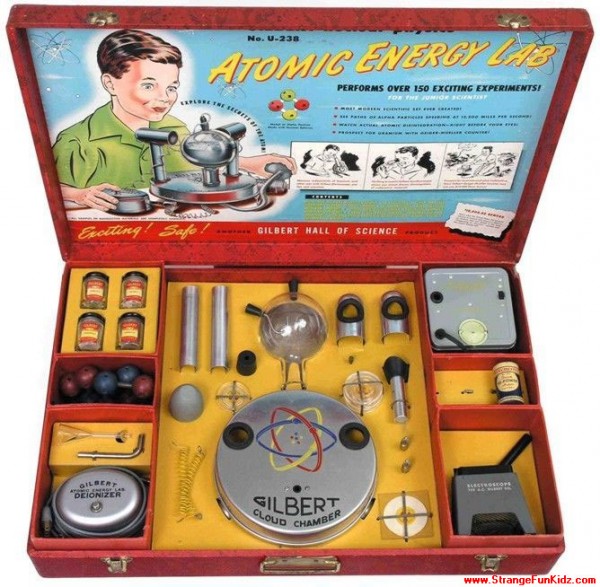 Good parents always want the best for their children, and for them to play as safely and happily as possible. In times gone by, however, this was was often easier said than done, as many popular toys and games contained harmful elements which presented real risks to kids. These days, what can and can’t be put on sale in stores is vigorously scrutinized, and consumer watchdogs are vigilant in documenting potential dangers. Even so, it’s incredible what toys have slipped through the net… Here, then, are ten toxic toys that children actually played — and in some cases still do play — with. 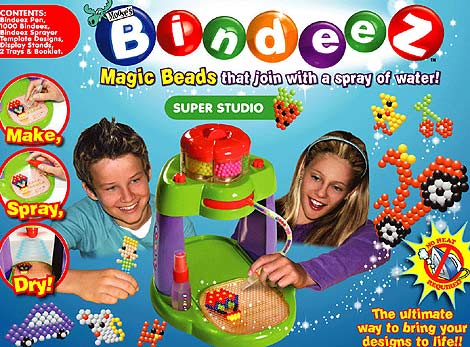 Bindeez, also known as Aqua Dots, Beados and Pixos, are a craft-based toy that allow children to design multi-dimensional geometrical patterns with brightly colored beads in a small tray. When the beads are sprayed with water they stick together; when dry, the entire design can be lifted out. Bindeez, Australian toy of the year in 2007, were the subject of a massive product recall following several cases of children suffering seizure-like symptoms and being hospitalized after swallowing the beads. Manufactured in China for an Australian games designer, the adhesive element of the toys was found to include a chemical which, when processed by the body, made the date rape drug GHB. 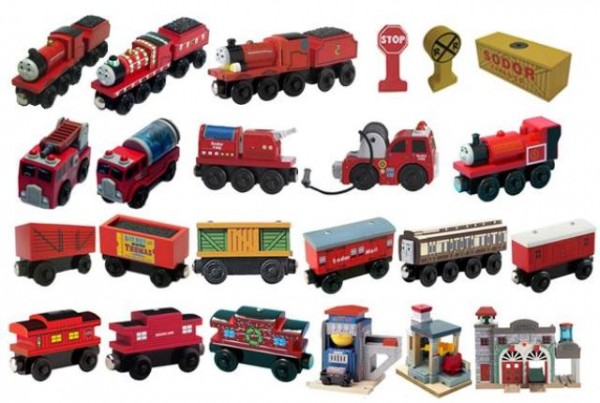 In 2007, the Consumer Product Safety Commission recalled millions of toys — mostly originating from China — believed to contain dangerous levels of lead in their paint. The biggest offenders were these wooden Thomas and Friends railway toys. Thankfully, the miniature vehicles, buildings and railway set parts were soon withdrawn from sale. 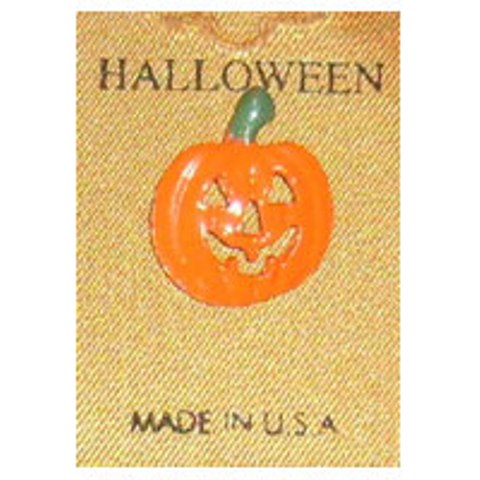 This cheerful pumpkin face looks friendly enough, but the pin, made by The Christmas Tree Shop, contains worryingly high levels of the most toxic chemicals. Under the Consumer Product Safety Improvement Act, which was passed in the US in 2008, harmful toxins were capped at certain limits. Lead was capped at 600 parts per million (ppm), cadmium at 75 ppm, arsenic at 25 ppm and mercury at 60 ppm. This scary product went way beyond that, with levels of arsenic at 4,765 ppm, cadmium at 3,847 and lead at a massive 190,943 ppm. 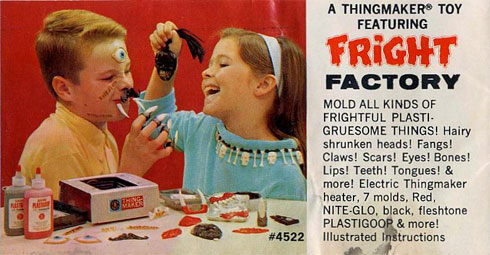 Creepy Crawlers were a familiar name to families in the 1960s. Sometimes known as the “Thingmaker,” the Fright Factory was the best known of the Creepy Crawlers sets produced by Mattel from 1964. Allowing children to create plastic molds with a substance known as “Plasti-Goop” and an alarmingly powerful hot plate — which could reach temperatures of 3,000 degrees Fahrenheit — Fright Factory was an extremely dangerous bit of kit to have around the house. Toxic fumes and extremely hot metal — what more could a child want?

These fun-looking cars and accompanying play mat look like an ideal gift for the typical kid with a love of bright colors and fast wheels. However, be warned: the play mat contains 30,831 ppm of Bromine, 30 times the amount considered safe. These cars would be better off on the road than in your children’s hands! 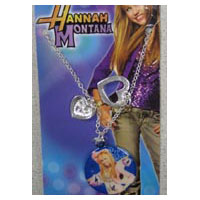 Considering the fact that they contain an incredible 406,510 ppm of lead, we’re pretty sure the star singer Hannah Montana won’t be wearing these necklaces any time soon. Surprisingly, the manufacturers are a subsidiary of Disney, a brand that most children and parents trust. Consumers would be to advised stay away from this product, however. 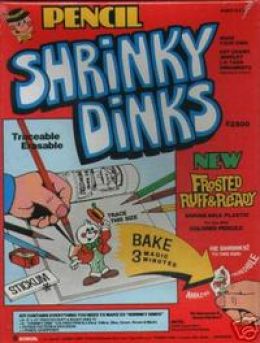 Created in 1973 by Betty Morris of Brookfield, Wisconsin, Shrinky Dinks were an enormously popular plaything back in the 1970s. Comprising plastic sheets that could be shrunk down to hard plate designs after being baked in the oven, the set was notorious for the fact that the molten plastic gave off highly toxic fumes. Hardly something that parents would allow their children to play with today, Shrinky Dinks went through many different designs and rebrands throughout the 70s and 80s. Most over-25s today will still remember playing with them. 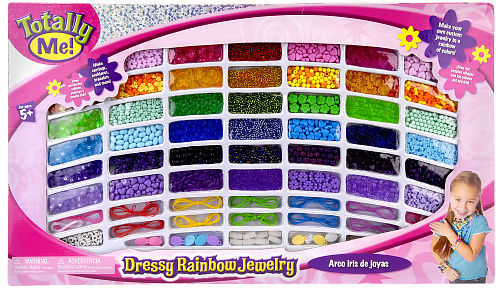 More potentially harmful kids’ jewelry here, with this offering from Geoffrey Inc. The set includes beads, bracelets and other items, and — more worryingly — dangerously high levels of cadmium and arsenic. With a cadmium ppm of 3,269 and arsenic ppm of 1,202, this product is among the worst offenders ever seen for harmful toxins. Amazingly, it is still widely available at major stores. Unless you want to dress your children in poisonous substances, Dressy Rainbow Jewelry is probably best avoided… 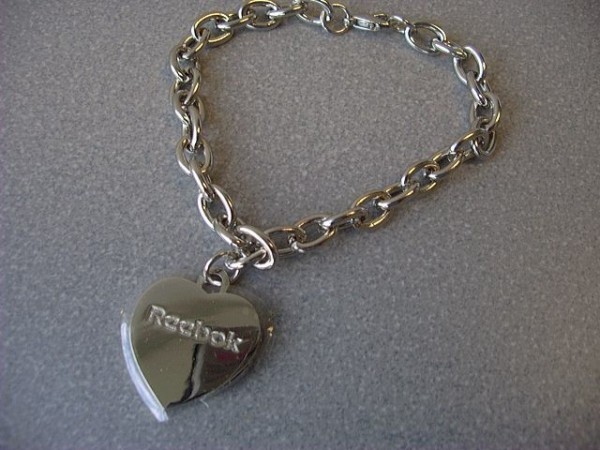 In a shocking and tragic case, a 4-year-old died from lead poisoning after swallowing a piece of this jewelry. The bracelets, given free in 2004 with purchases of children’s Reebok shoes, were manufactured in China and were found to contain high levels of lead. Following the tragedy, the bracelets were immediately withdrawn from stores. 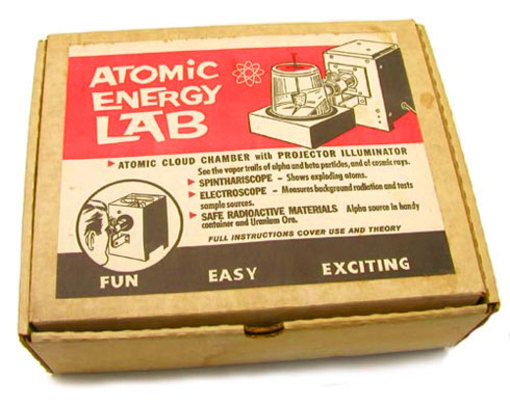 Perhaps one of the most notorious toys to ever go on sale in the United States, A.C. Gilbert’s U-238 Atomic Energy Lab brought the Atomic Age into the living rooms of 1950s America — giving a whole new meaning to the term “nuclear family.” First appearing in 1951, the lab included, amongst other nuclear playthings, a Geiger counter, four samples of Uranium-bearing ore and, unbelievably, three “very low-level” radiation sources. The kit was only available for one year, which may have had something to do with the $50 price — the equivalent of over $350 today — but, more likely, parents not being overly keen on inviting radiation into their homes!