When the world’s best musicians unite for a good cause, the results are staggering. The 12-12-12 Hurricane Sandy Relief Benefit Concert which aired on earned over $35 million dollars for the Robin Hood Fund to help offset the estimated $55 billion dollars of damages left in the superstorm’s wake. As one of the biggest concert events in history, the Madison Square Garden show reached over 2 billion viewers compliments of 34 national networks who carried the broadcast. Additionally, over 30 websites aired a live stream of the broadcast to extend the audience base and expand donations. 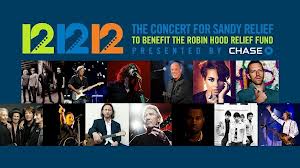 Following the concert, Executive Director of the Robin Hood Fund David Saltzman assured “We will make sure that the money goes out right away to the most affected in New York City, New Jersey, Long Island, Connecticut” and promised “The money that we raised from this concert will be distributed in the days, weeks, and months, not years.”

Producers of the show include the biggest names in film, entertainment, and television. Harvey Weinstein of The Weinstein Company, John Sykes of Clear Channel, and MSG’s James Dolan joined forces to ensure the 6 hour concert to assist in the large scale effort to bring relief for the millions affected by the storm.