The war on drugs is fiercely fought and made up of many smaller, but no less important, battles. Anti-drugs campaigners fight one such battle, driving home the message that hard drugs are dangerous and harmful to one’s health. Powerful tactics are employed in this effort, not least the way in which public service ad campaigns have become increasingly shocking. To grab the attention of those at risk, some truly gruesome and otherwise disturbing images have been shown. Advertising isn’t just about selling to consumers; it can also be about preventing sectors of society from becoming consumers – of dangerous narcotics. Here, then, are the 13 most disturbing anti-drugs ads out there. 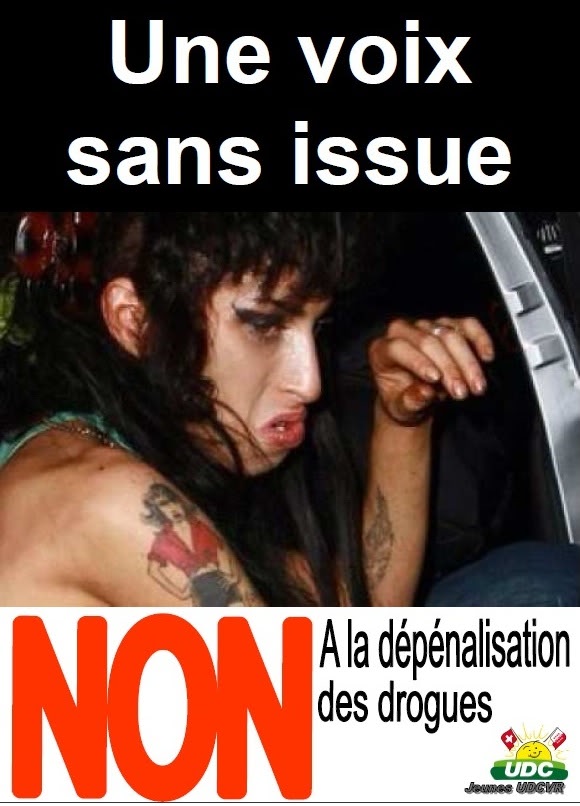 If ever there were a poster child for the harmful effects of drug abuse in our time, Amy Winehouse is surely it. This controversial Swiss ad, created by a branch of political party the Young SVP, was branded “tasteless” in August 2011 for its depiction of the deceased British pop singer, plainly intoxicated, with a slogan that translates as “No — to the decriminalization of drugs.” The president of the Young SVP Unterwallis responded: “It is not our methods which are shocking — it is reality.”

12. Heroin Screws You Up 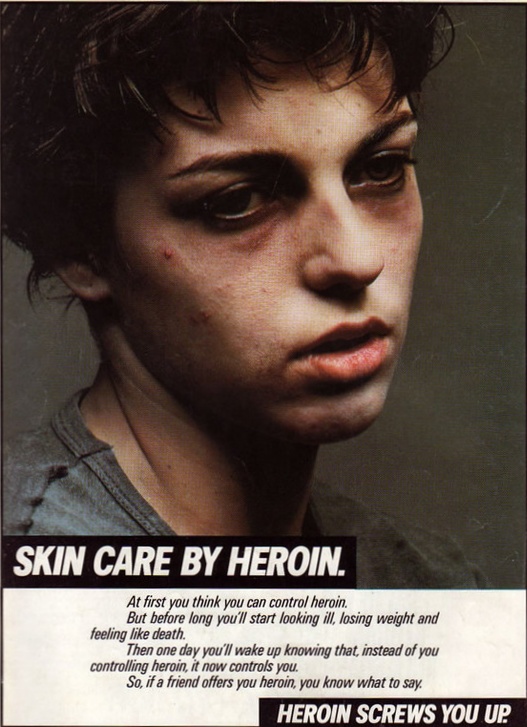 This British ad from the 1980s was released by the Government in response to a rapid rise in heroin use. The approach of attempting to appeal to young people’s vanity by showing the physical effects of addiction is one that continues to this day. Despite the unsettling nature of the image, however, the boy in the campaign ironically became a teenage pin-up, giving rise to the fashion industry’s notion of “heroin chic.”

These graphic images are from a series of anti-methamphetamine posters produced in recent years by the Montana Meth Project. Launched by software billionaire and philanthropist Thomas M. Siebel in 2005, the project’s goal was to shock potential meth users — particularly teenagers — into thinking twice before trying. Judging by these disturbing images, we think they did a first-rate job. 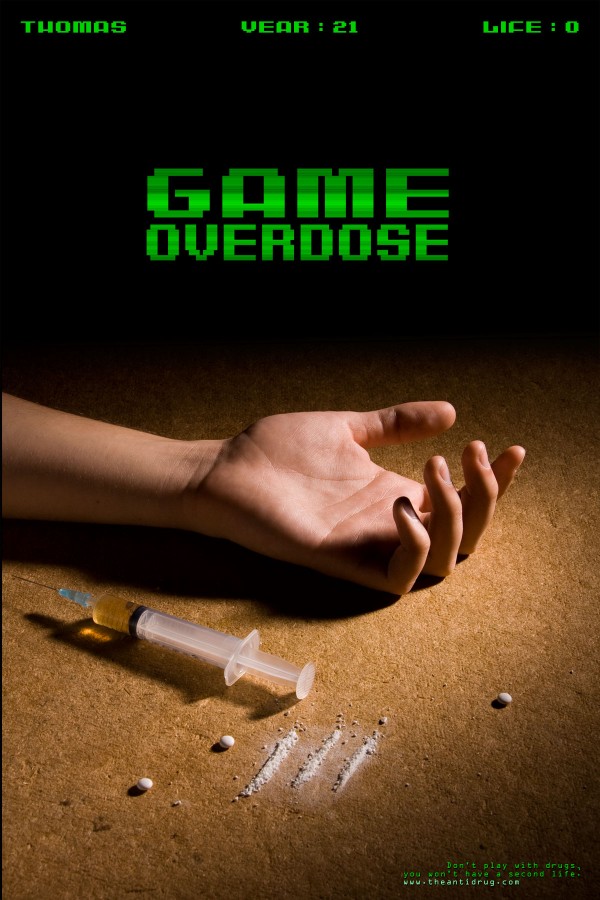 This poster for parental concern website theantidrug.com links two strong, but very contrasting, youth concerns — video games and drugs. Highlighting the idea that kids “play” with drugs, the clever imagery is powerful and elicits a strong and immediate response.

9. Sometimes the After-Effects Never Wear Off

This powerful public information anti-drugs poster was created for Britain’s Department of Health in 1990. The ad is just as chillingly effective today as it was then. Its stark message and matter-of-fact tone remain strong weapons in anti-drug campaigning.

8. Don’t Let Drug Dealers Change The Face Of Your Neighbourhood 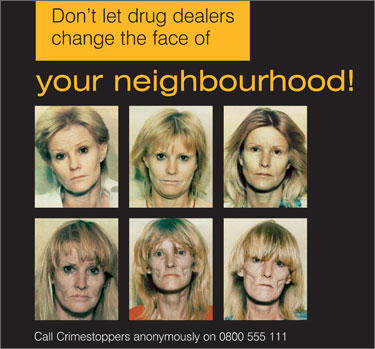 Another British ad — this one released by the police to encourage the public to give information about drug dealers — depicted shocking “before-and-after” mug shots of different substance abuses users, showing the rapid deterioration of real-life addicts due to the effects of hard drugs such as crack and heroin. 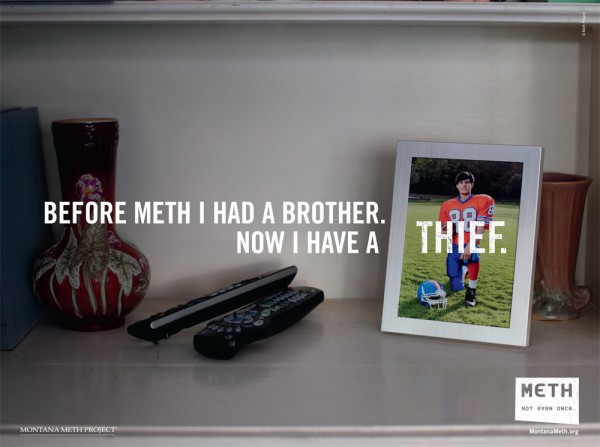 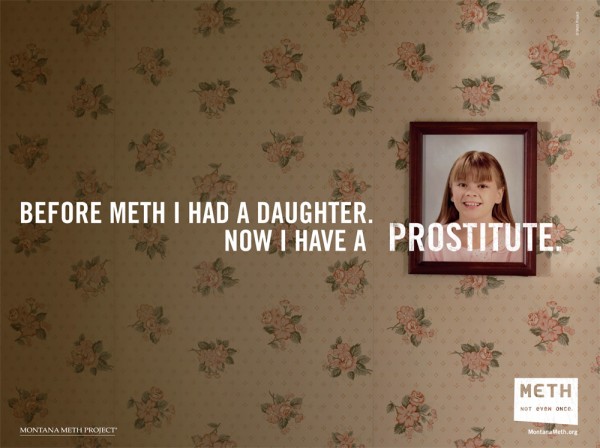 More shocking ads here from the Montana Meth Project, this time from the initiative’s “Before Meth…” campaign. The project’s use of slogans and subtle but high impact images has gained a lot of media attention since their ads first appeared in 2005. The non-profit organization seeks to reduce methamphetamine use by highlighting its consequences — and not just on the users themselves.

6. Ecstasy — Lose More Than Your Inhibitions 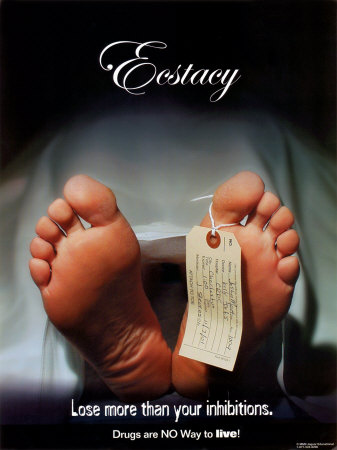 This anti-ecstasy ad put out by Impact Publications in the USA certainly makes a powerful impact. The chilling poster serves as a reminder than ecstasy can be just as deadly as other hard drugs. This shocking image is from a poster series that deals with “the tough realities surrounding substance abuse.”

5. Still Think Drugs Don’t Hurt Anyone But Yourself? 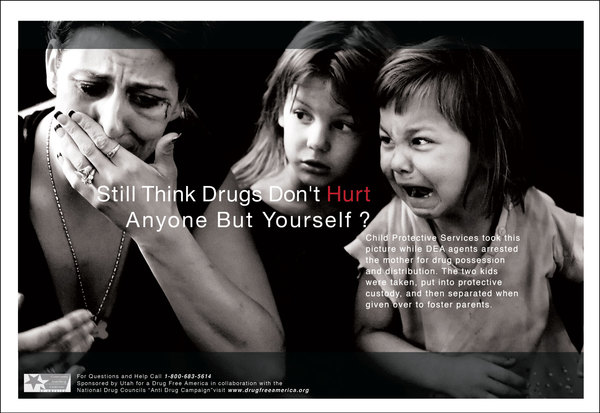 This poster becomes more disturbing the more you read. Featuring a young family in the aftermath of the mother’s arrest by drug enforcement agents, the despair (and anger?) on the young faces, captured by Child Protective Services, speaks volumes. As the ad explains, following the arrest, the children were taken into care and put into separate foster homes.

The before-and-after effect of drug abuse is used to shocking effect in these pictures from a hard-hitting campaign instigated by Deputy Bret King of the Multnomah Sheriff’s County Office in Oregon. The photos — released in 2011 — were part of a documentary film called From Drugs to Mugs, itself a follow-up to the controversial and widely publicized 2004 release, Faces of Meth.

This ad powerfully brings home the effect that drug taking parents can have on their children, casting the issue from the perspective of the kids. Once again it’s stressing the message that it is not only the users who are affected by drugs, but their families and communities as well.

2. No One Thinks They’ll Lose… 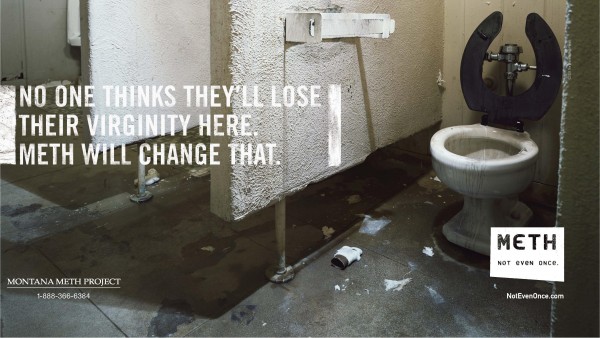 Next, the Montana Meth Project with another grim image evocative of wasted lives and despair. Since its inception the Project has done terrific work in raising awareness of methamphetamine abuse, not only in Montana but in seven other states. It has used different forms of media, including print, radio, TV and poster ads — including work from high-profile movie directors such as Tony Kaye, Darren Aronofsky and Alejandro González Iñárritu.

These posters from Pakistan-based design agency Off Road Studios pull no punches. Sharp, effective and to the point, they get the message through loud and clear. As powerful as any anti-drugs ads we’ve seen, they keep the text to a minimum, allowing the images to speak for themselves.

Bonus: Choose Your Side 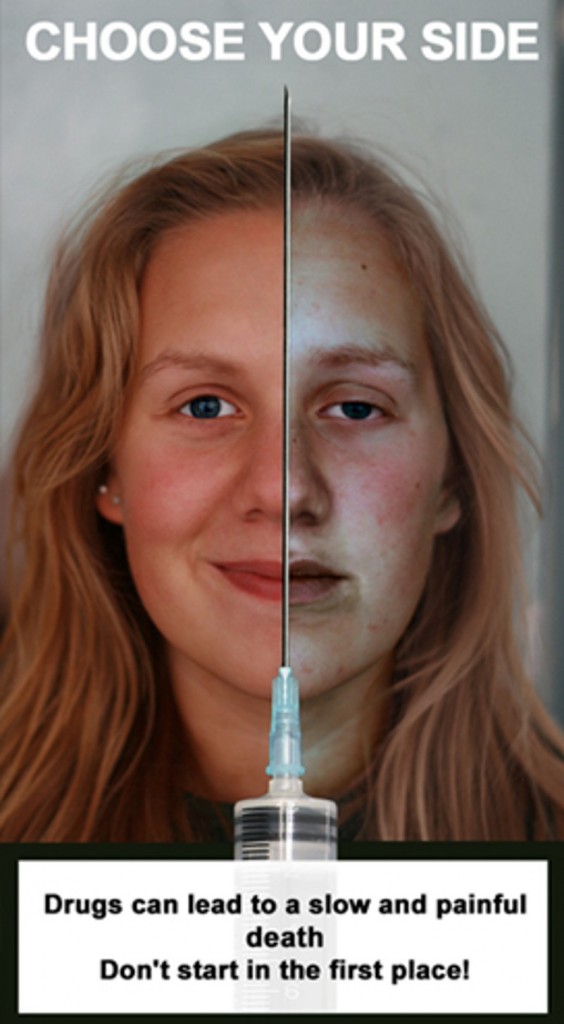 This powerful poster simply and effectively displays a stark choice: heroin addiction or health? Created by a volunteer for a Lithuanian charity organization, the image effectively shows how everyone can become involved in fighting the battle against hard drugs — by simply refusing them. Posters displayed at a grass-roots level are just as important as multimillion dollar campaigns.