Cool ads push the boundaries of what is acceptable, helping us to think in new and exciting ways. But some just cross the line into downright creepiness… 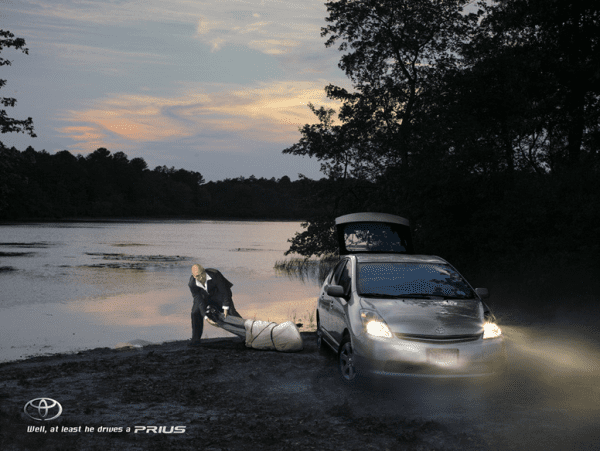 This spectacularly creepy advert from Toyota depicts a man dumping a body into a lake, with the line ‘Well at least he drives a Prius’. Suggesting that driving a Toyota can forgive all your sins is just downright too far – let’s just hope this didn’t give anyone any ideas… 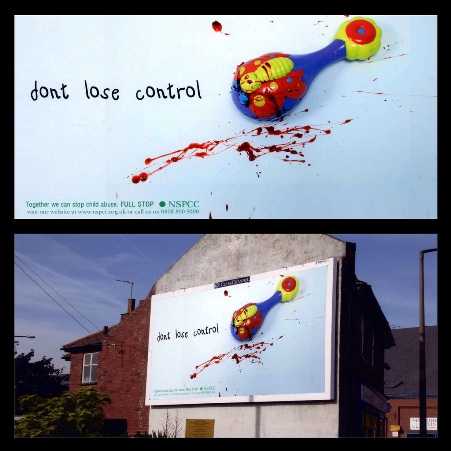 This billboard is the visual equivalent of the following conversation: ‘Where’s Archie mommy?’ ‘He’s dead. I killed him with a hatchet.’ Apart from the fact the scarily realistic blood is grotesque, surely this billboard would be even more creepy for kids on a day out in the back of the car? Mommy and Daddy have a surprise for you when we get home… and it’s not nice.

This advert seems amusing enough but manages to leave a distinctly creepy taste in the mouth by implicitly begging the question, how many of us were noisy, messy, bratty mistakes? 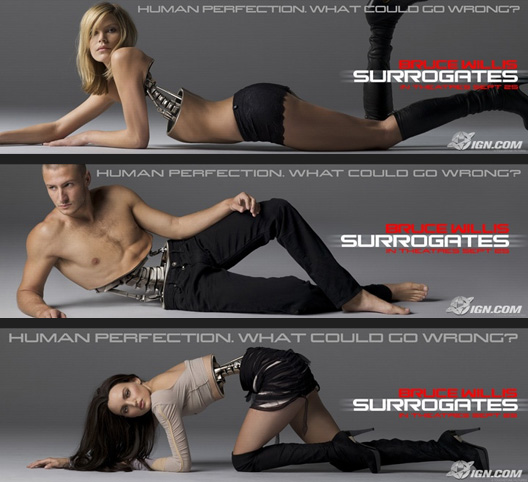 These posters have been all over NYC and use sexually provocative poses with the jarring addition of sections of exposed mechanical insides. Although everyone loves a saucy fembot, the juxtaposition between evil mechanical robot and sensual feminine flesh makes for uncomfortable viewing. 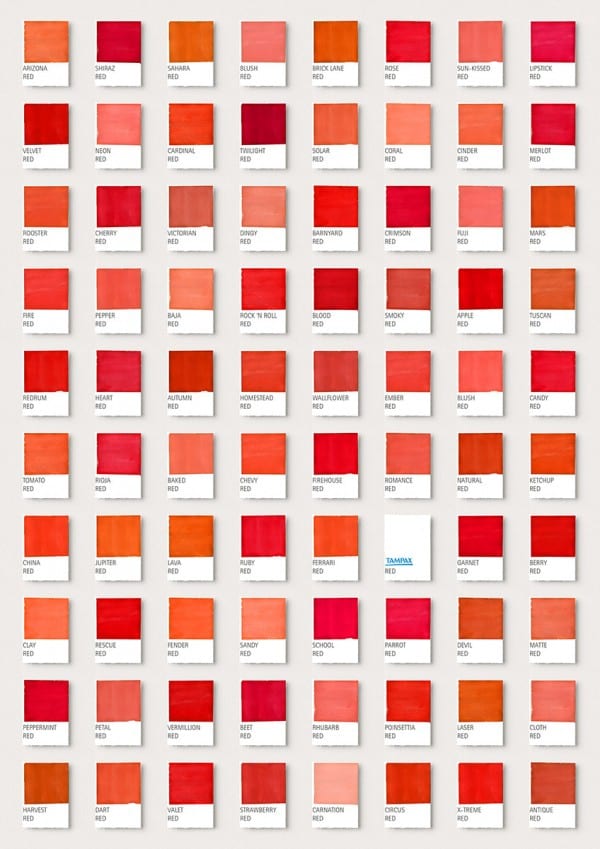 Adverts for women’s hygiene products always have massive potential to creep people out. The sheer volume of red on display here becomes nauseating as we gradually understand what this advert is getting at – anything that so forcefully and boldly draws attention to what really goes on down there really is just creepy (at least, for men).

This advert is meant to showcase the environmental perks of Virgin Trains in the UK, an idea that is fairly amusing – people dressing up as furry animals and pretending to ‘do it’ so often is – it’s the over the top execution that becomes slightly disturbing. Rabbits doing it one-leg-up against a tree sets alarm bells ringing, but for us the creepy line is crossed when a flock of sheep tackle a bumble bee before gang-raping the poor thing. If that isn’t creepy, we don’t know what is.

Although this raunchy commercial sets pulses racing, when the glasses are taken off and the hot girl spanking herself is revealed to be a rotund cleaning woman, we can’t help but feel a little freaked out. What’s more, it draws attention to the subversive nature of all advertising: presenting things through rose tinted glasses, in their best light – as such it provides a creepy reminder of the way advertising manipulates our lives on a daily basis.

This at first seems like a crappy ad for diapers, and features a load of men running around in diapers with the line ‘now your big guy doesn’t have to worry about a thing’. But by the end of the commercial we realize that the diapers are needed because the men can’t help but wet themselves whilst watching horror channel, Scream TV. The combination of weird kiddy music and men frolicking around in diapers before weeing themselves, is more than a little bit creepy.

Image in public domain, via randomdribble

This isn’t strictly speaking an example of ‘subversive advertising’, but we felt merited a place in the list. The ad is real and meant to show the glory and cosmopolitan nature of PIA – Pakistani Airlines – but the shadow of a plane looming large on the twin towers comes off as extremely creepy in retrospect, especially given the irony that it is an ad for a Muslim country’s airlines.

4. Hansaplast Condoms – My Mom Said I Could

The weird combination of slighty-cute, slightly-mischevious boy who gets up to no good and justifies himself with the phrase, ‘my mom said I could’, and the twist at the end where we realize all mom says every day is ‘Oui!’ Oui!’ as she enjoys herself in the bedroom, or worse, services another client…. that’s just creepy. 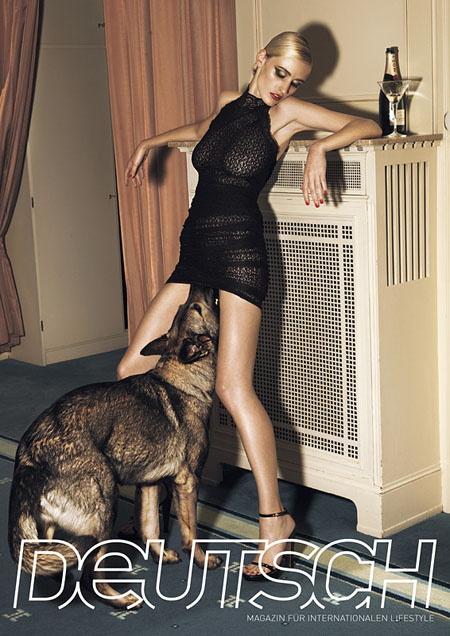 Not much explanation needed here. This ad does not hold back on the bestiality and really does cross the line into downright scariness. We sincerely hope there aren’t people out there doing this – and in any case what impression does Deutsch magazine hope to give with this ad? 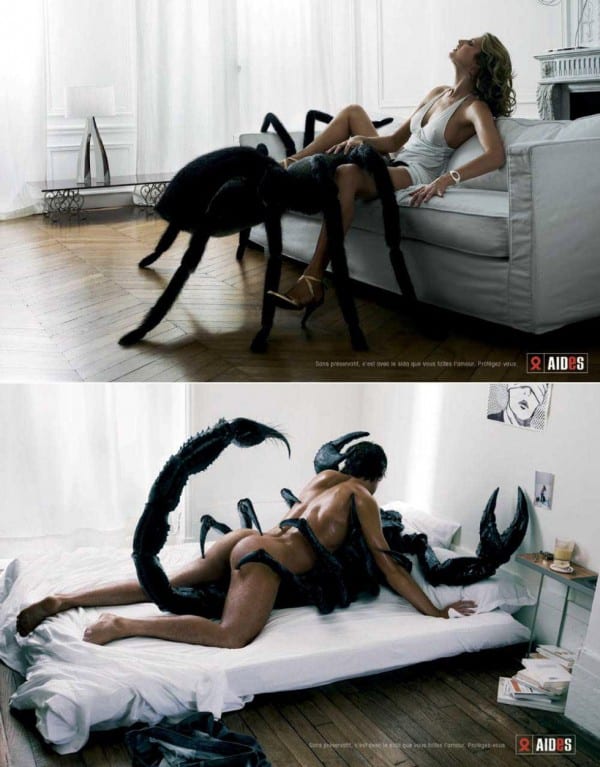 These graphic and disturbing ads are part of a real life AIDS campaign conducted in France. They consist of images of a man having sex with a giant, black scorpion, and a woman receiving oral sex from an enormous, hairy tarantula, and once again, although they get the point across, we’re not sure if psychologically we’re any better off for it.

This sickening ad admonishing us to think twice before booking flights works around the idea that ‘your flight has an impact’. It takes this idea to extremes when it features polar bears falling out of the sky and impacting on hard tarmac, before panning out to show them lying bloodied and broken. Climate change is bad, yes we get the picture, but is the reality really so direct and if it is, do we really need to see it like this? And should our kids see it?