Every business, they say, needs a catchy name – but some people evidently can’t tell the differance between ‘catchy’ and ‘ridiculous’. Would you have your haircut at Assman the barber or get a quote from Mammoth Erection scaffolders? Read on for some of the most unfortunately named companies on earth…

Finding a decent scaffolder can sometimes be hard. But if you phone up Mammoth Erection scaffolding asking for some long, firm poles, don’t be surprised if they hang up on you. And don’t be surprised if your bank manager raises his eyebrows when your payment clears at the end of the month. 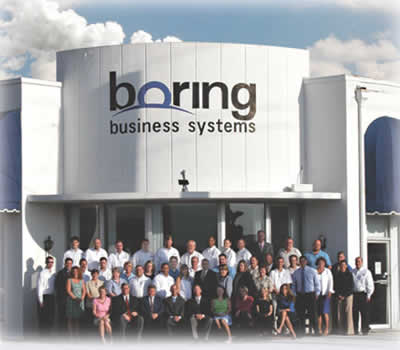 This might be passed off as one of those lame corporate jokes, if only the company wasn’t actually so mind-numbingly generic. ‘…mission statement… blah…innovative solutions…blah…’. Only call your company ‘Boring’ if you plan on using the skull and crossbones as your logo and having fireaters and topless dancers in the office. 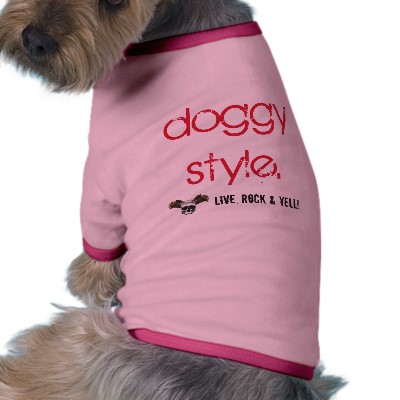 Politicians and high court judges have been enjoying the illicit amusments of S&M for decades. But they might get a shock when, expecting Miss Whiplash, they are instead given a quote for coin-operated arcade machines.

When you choose to use a particular company, it’s nice to know they’re good at what they do – but the name Boxwell for a funeral services goes way past reassurance, beyond a sick joke and into the realms of the horrifyingly morbid. People want to be gloriously entombed, not boxed up and put in storage. 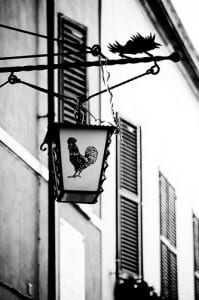 You’d think an Italian bar that was bothered enough to use an English name would also be bothered enough to check what that name meant. After all, calling your bar ‘The Black Cock’ as an exercise in marketing might severely limit your target audience – unless, of course, you’re that kind of bar. 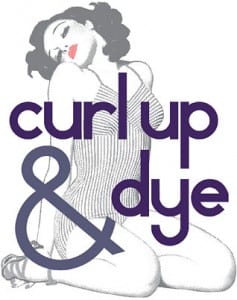 Yet another hairdressers who have hit upon the life-changing discovery of the dye/die pun – what a pity it’s not really helpful in the context of getting your hair cut. ‘See Paris & Dye’: maybe as a tourist novelty… ‘Curl Up & Dye’: no thanks, I just want a haircut…

Another name that would be great if only it made sense. Bimbo could base themselves entirely around a range of novelty baked products for, or by, idiots – the dipsy doghnut, airhead loaf or clueless tart perhaps. As it is they don’t produce these products and their name is just dumb. 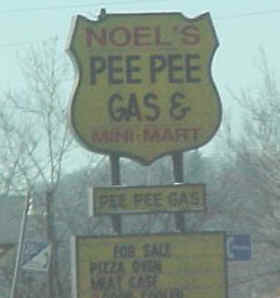 The sign for Pee Pee Gas sits gloriously alongside another for Pee Pee Creek in Piketon, Ohio, providing endless fun for schoolboys and the immature everywhere. Unsurprisingly, for a company with such obviously limited marketing power, they don’t have a website.

More Brokeback Mountain then Nantucket, this organic butcher shop in Massachusetts manages to make itself sound disturbingly like either an open air wild-west brothel, or a gay bar for cowboys. Maybe we’ve just got dirty minds…

We’ve all heard the horror stories about unscrupulous male employees at McDonald’s putting a little something extra in your mikshake (yes, we do mean semen) – but openly putting ‘orgasmica’ in the name of your fast food company is surely business suicide. Mayonnaise anyone…? 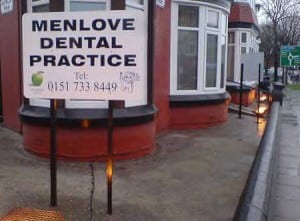 You might think twice next time you’re due a quick check-up if your dentist is called this – everyday dentists’ sayings such as ‘open wide’ and ‘it’s just a little prick’ might take on a disturbing subtext.

Does this ever stop being funny? We thought Kum & Go was what women think all men do. Nope. The two gentleman who created these highway stores cunningly combined the first letters of their surnames – evidently they were so pleased with themselves, they didn’t notice until it was too late. Woops.

Why, oh why, write Kids Exchange as one word? Has nobody noticed it looks more like Kid Sex Change or Kid Sex Exchange? Surely advertising this business is a quickfire way to go straight to jail. Exchange your kids for sex? Don’t think so. 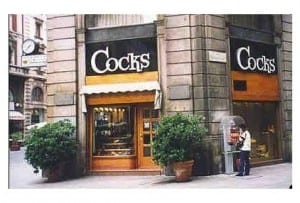 Hard to tell with this one – do they have cocks on the menu, cater to a clientele of cocks or are they simply trying to set up a nude male restaurant to rival to Hooters? Perhaps, they just don’t care. 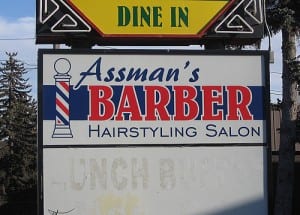 It’s hard to feel this name has any merit other than the fact it is the family name – surely you would have changed it by deed poll ages before starting up a barber shop…? In any case, we dread to think what kind of haircuts the delightfully named Assman specialises in. Or what it smells like in his shop.

For those of you not familiar with the phrase ‘camel toe’ it is the phenomenon that occurs when a woman’s most delicate area is visible through tight pants (and said to resemble a camel toe) – popularised by the film, The Weatherman. The reality of Camel Towing, a breakdown service in Atlanta, is not quite as raunchy as it first appears. More’s the pity.

Wrong on so many levels. We can state with a high degree of certainty that we will never be ordering any food from ‘Dirty Dick’s Crab House’ for fear their secret ingredient is male member complete with crabs. If you don’t believe us check out the cartoon of ‘Dirty Dick’ – does he look like the kind of man who might have crabs to you? Exactly

You’d assume that no respectable man or woman would ever purchase insurance from a bunch of Kuntz? Perhaps part of being respectable is being able to look past these things… 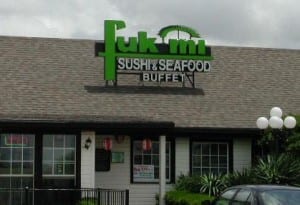 If ever there was a case of lost in translation, this is it. So abominably named, it’s like something out of the Simpsons – the employees of this firm must have a hell of a laugh every day with classics like ‘ask me where the best sushi bar is and I’ll just say Fuk Mi’, or answering the phone ‘Fuk Mi, how can I help?’. Or alternatively, a little piece of them might die every time they hear these same lame jokes.

All logos are copyright of their respective companies. Images from: n_carpanzo, spacetimecurvature, gdodson, ry vision.