The media likes to complain about its own demise. How many stories have you read about dying newspapers, flailing magazines, and sagging book sales?

Fortunately, new models are infiltrating the media landscape. These models, which include crowdsourcing, crowdfunding, and nonprofit media, are like saplings sprouting from a burn area. With enough nurturing, they hold incredible promise. 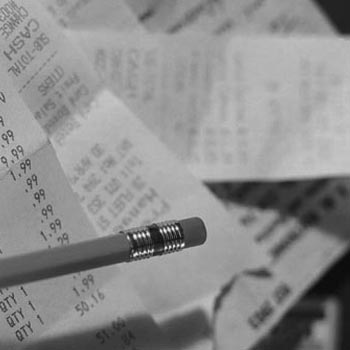 In May 2009, someone in a London government office copied a terabyte of classified data onto a hard drive. The data contained every expense claim made by 646 members of parliament over the past five years. The UK Telegraph secured the information, allowing its reporters to pound out juicy headlines that boosted its sales by more than 600,000 copies.

Rivals, including the archrival Guardian, had to wait for the government to post all the records publicly before it could reports on any new expense scandals. When the files were finally released, the Guardian had to review 700,000 “carefully edited” documents in a painfully short period of time.

To accomplish this, the Guardian uploaded all 700,000 documents to its website. Next to each document, it featured an intuitive feedback interface allowing users to rate a page by type of document and level of interest.

The experiment was a wild success. Readers–who also happened to be taxpayers–reviewed 170,000 expense documents during the first 80 hours of the program, according to Andersen, who says the visitor participation rate was 56%. As a result of crowdsourcing, the Guardian was able to find and report the scoops in a timely manner–for next to no labor costs. 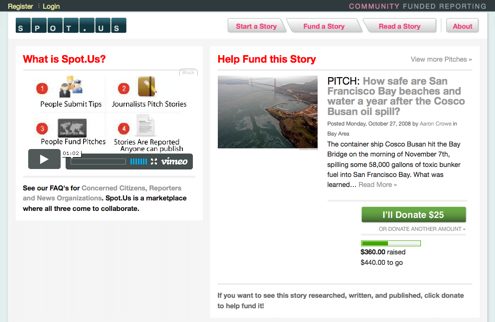 Spot.us makes crowdfunding easy. A reporter pitches a story idea. If users are interested in seeing the entire story online, they donate a small amount of money ($20 is the default). Once enough people donate to fund the story, the journalist writes it. Donations are tax-deductible. If a major newspaper buys rights to the story, pledgers are reimbursed.

So far, Spot.us mostly covers the California Bay Area. Completed stories include coverage of tent cities in San Francisco, fact-checks of local political ads, and affordable solar energy in the Bay Area. Spot’s microfund model is backed by the Center for Media Change, the Knight Foundation, and other groups.

UK-based Global For Me offers international issue coverage in exchange for micropayments. For as little as GBP1.50, readers can help fund a story on Guantanamo detainee trials, Latin American soccer World Cup qualifiers, swine flu in Bulgaria, and much more. In exchange, GFM pays reporters industry rates to write world-class stories. You can also request stories.

GFM is a subsidiary of Global Radio News, whose partners include CBS, Fox, the BBC and Sky News.

This CNN-sponsored citizen reporting site recently became a hub for crwodsourced coverage of the Iran elections. Users post videos, photos, and written reports on the site, some of which CNN news channels feature on TV. Users cover everything from global catastrophes to TV episodes. The site claims almost 321,000 worldwide iReports, mostly from the US. 699 of those stories were featured on CNN last month.

Major media outlets can’t cover every single crisis in the world. In 2008, Ushahidi–Swahili for testimony–stepped in to fill the coverage gap. Originally designed to map post-election violence reports in Kenya, the Ushahidi platform is now expanding to map worldwide citizen input via email, Web, and mobile phone applications. The open source platform allows crowdsources user information, then presents it in a visual, intuitive, and comprehensive UI (here’s an example).