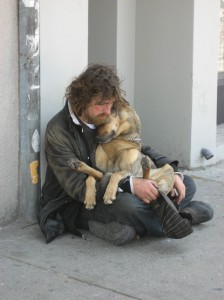 Homelessness in the United States has always struck me as particularly painful. Penury is not well tolerated in the Land of Opportunity. People think money is easy to come by here, giving extreme poverty an especially powerful stigma.

In some countries, the homeless are seen as being cursed. In America, we do the cursing ourselves, labeling homeless people as lazy–one of Calvinistic capitalism’s direst sins.

The truth is that most homeless people know how to work hard. Good Works, Inc., an organization that works with homeless people in Athens, Ohio has a telling article on how people become homeless. I derived these steps from their article:

1. Be all alone. As in, have no social network of friends and family to ask for help when times get rough. This could happen if your parents are abusive, much of your family is dead, you have run away from home, you’ve disconnected by choice, or a variety of other ways. Many homeless people end up that way because they have no support network.

2. Get a minimum wage job. Supporting your family on a paycheck-to-paycheck basis leaves you no money to cover emergencies, such as a broken car or health problem. You won’t be able to cover rent, and will be evicted.

3. Get sick. Even investing in GM won’t lose you quite as much money as a serious illness. If you’re uninsured, your money gets eaten with incredible velocity. If you are insured, there’s still a good chance you’ll be in debt and unemployed, putting you at risk for poverty.

4. Have your home destroyed by a natural disaster. Instant homelessness, at least until someone gives you money to rebuild.

5. Harbor a tricky mental issue. Alcoholism and other addictions count. So do hard-to-acknowledge mental imbalances, such as bipolar disorder. Addictions funnel your money towards products rather than rent or bills; mental illnesses render it difficult to keep a job or make long-term financial decisions. A sizable segment of the homeless population has mental issues that they don’t recognize as contributing to the instability of their lives.

Homelessness happens as the result of a combination of issues. The fast track to homelessness would involve all five of the problems listed above.

What other issues have you run across that cause homelessness?