Nearly two hundred years ago the founder of the Rothschild banking empire proclaimed: “Give me control over a nation’s economy and I care not who writes the laws.” Read on for an overview of the ways the Freemasons are said to control business, politics, indeed, the entire country – and why they might not. 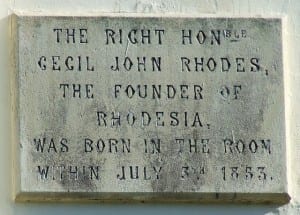 The Freemasons select and indoctrinate the finest minds of every generation by giving them Rhodes Scholarships to Oxford University, where they have access to the best teaching and others sympathetic to Masonic ideology. Rhodes scholars invariably go on to positions of power in finance, law, politics or the media, from which they are able to ensure that Masonic interests are promoted and protected.

Cecil Rhodes himself became a Mason whilst studying at Oxford in the 1870s. After hearing a speech by fellow mason, John Ruskin, calling for ‘a ruling class with a powerful army to keep it in power’, he became obsessed with the idea of bringing the entire world under the rule of the British Masonic elite, and sought to do so through extensive business projects in Africa and the Empire. In his estate Rhodes entrusted Nathan Rothschild with continuing his program of intellectual world domination, and today Rhodes scholars occupy key positions throughout the global business world.

Although the link between Rhodes and the Masons is clear for all to see, it is entirely implausible that such a venerable institution as Oxford University would allow any external political agenda to play a part in its entrance policies. Accepting the Rhodes scholar conspiracy is akin to accepting that the whole academic world is quietly shaping the world – which is probably true in a very obvious, non-sinister way. 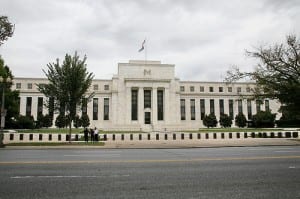 Freemasons use the notion of the Federal Reserve as a public institution to trick the public into believing no single group has a monopoly on the production, distribution and manipulation of currency. The Masons control the Federal Reserve, operating it as essentially a private bank. Profit is created by charging 5% interest (according to the Act) on every dollar bill that is issued – 5% of the face value that is – so if a dollar bill stays in circulation for 20 years, we pay back the dollar itself, plus a dollar in interest into the pockets of the Federal Reserve.

The great banking families, such as the Rothschilds, Warburgs and Rockefellers, exercise almost total control over the Federal Reserve. Many of these are directly descended from the Knights Templar and the Masonic European elite. When these families decided to create the Federal Reserve in 1910 they wrote their own domination into the very constitution of the American people, as well as a license to print money from thin air.

The notion that the Federal Reserve is a private institution controlled by any group or individual is probably both right and wrong. The Federal Reserve derives its power from Congress, and is considered an independent central bank because its decisions do not have to be ratified by the President or anyone else in the executive or legislative branch of government. Congress periodically reviews its activities and can alter its responsibilities. On the other hand it’s undoubtedly true that a handful of powerful families exercise an inordinate amount of power – although the amount of political infighting suggests they are far from aligned with each other.

5. The Square and Compass 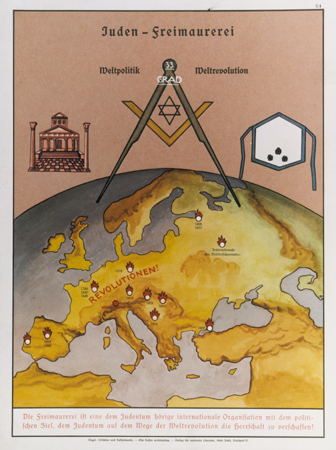 Write into our everyday business and political language tacit signs of Masonic dominance. According to this conspiracy, everyday sayings and names of initiations or processes are actually based upon Masonic ritual and symbols.

One of the most significant Masonic symbols is the mason’s square. In court we say “his testimony doesn’t ‘square’ with the facts of the case”. When you go to jail they give you “3 ‘square’ meals”. Meetings have always traditionally been held at the Town ‘Square’. If you’re not cool, they say you’re a ‘square’. Remember to play “fair and square”. Equally, another Masonic symbol, the compass, also codifies the everyday language we use to conduct business. When you graduate college, you receive a ‘degree’ (you are also called an Alumni – for Illuminati, another group connected with Freemasonry), as the Masons set up the institutions of learning in the first place. If you get in their way they give you the ‘3rd degree’, which was, in fact, the highest degree in Freemasonry for many years.

This conspiracy is for those that watch the movie, the Number 23, and then start counting the objects in their room. Masonic codes are no more written into the language of business, politics and education than any other codes we care to find. ‘Working like a dog’, ‘a dog’s dinner’, ‘dog tired’ – shall we conclude that dogs control the business world? No, you morons. 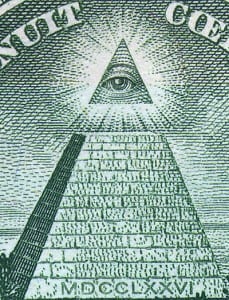 Further proof that the Masons control US money and the business done with it (and in particular the Federal Reserve) may be seen in the fact that on the back of the U.S. one dollar bill there is a pyramid with the All-Seeing-Eye of God, with the message,  “New Order of The Ages” or “New World Order”.

In Europe, occult leaders were told by their Familiar Spirits as early as the 1740’s that the new American continent was to be established as the new “Atlantis”, and its destiny was to assume the global leadership of the drive to the New World Order. By controlling the Federal Reserve and banks the Masons have been able to gradually familiarize us with their symbols to the point we are entirely unaware of them as they surround us. The all-seeing pyramid is a symbol of their dominance, written under our noses into the very currency with which we conduct business.

Short answer – no. Benjamin Franklin was the only Mason on the first design committee, and his suggestions had no Masonic content. None of the final designers of the seal were Masons, and the interpretation of the eye on the seal is subtly different from the interpretation used by Masons. The eye in the pyramid is not, nor has been, a Masonic symbol – the eye of providence is in fact Trinitarian reference to the God of Christianity and considered a solely Christian symbol, and in any case, Freemasonry was only just beginning in England and hadn’t arrived in the US by that time. So that pretty much wraps that one up. 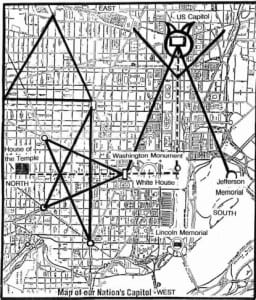 Freemasons embedded Masonic symbols into the Washington, D.C., street plan designed mainly by Frenchman Pierre L’Enfant in 1791, writing their codes into the very seat of political power. He hid certain occult magical symbols in the layout of U.S. Governmental Center which, when united become one large Masonic and Luciferan symbol.

How they did it:

The street layout of Washington contains a plethora of Masonic and associated symbols, including the set-square, compass, pentagram, 666, figure of the Godhead and the Eye of Providence. The implication is that the Mason dominance over the US meant that even the origins of its political and financial structures were based in Masonic ideology.

It can be said with a high degree of certainty that Pierre L’Enfant wasn’t a Mason, and in any case, what would be the point of laying out street designs in complex geometrical shapes few people would appreciate? Mark Tabbert, a self-confessed Mason and director of collections at the George Washington Masonic Memorial in Alexandria, Virginia, has said that “there has to be a reason for doing such a thing. Dan Brown will find one, because he writes fiction. But there isn’t one.” 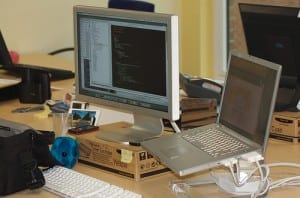 Masons ensure, through programs such as the Rhodes Scholarships, that their members occupy positions of key significance in the business world. Of prime importance are the recruitment departments of the worlds largest corporations – by controlling these the Masons ensure only those who they approve of may find work in the most powerful establishments and only their own can rise to weld such power.

Masons fill the corporations with those sympathetic to their cause by total dominance of human resources departments and ensuring that they have a man on the board of every major corporation. Unless you are one of them or gain approval, you will never rise to any position of significant power. To conceal this fact they encourage the creation of thousands of meaningless bureaucratic positions in business, which fool people into thinking they have authority when in actual fact they are merely pawns.

Recruitment and promotion are under more scrutiny today than ever before, what with equal opportunities and all that. It would be very difficult to mount a huge scale program of selecting by allegiance without attracting attention somehow. Also: the sheer number of HR departments in the country make this a stupefyingly insane proposition. Never in my time have I or anyone I know been asked if I am a Mason at a job interview, or prompted to give a secret sign. Maybe I’m just not in on it though . . . 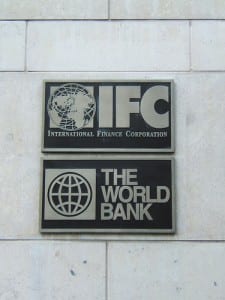 The Freemasons use the World Bank as a front for an international banking cabal under their control. They plan to eventually subvert the independence of the U.S. by subordinating national sovereignty to a strengthened Bank for International Settlements with the intent to create a world system of financial control in private hands able to dominate the political system of each country and the economy of the world as a whole

Control of the World Bank allows the Masons to extend their global influence in a similar way to how they control the Federal Reserve. They control the Board of Directors and the recruiting structures and from there are able to dictate policy and ensure that these policies are not objected to.

Although many of the Bank’s practices are dubious the idea it is controlled by one group (other than of course America) is preposterous. The World Bank was created as a result of the complex political minefield that was the Second World War – after such a historically significant event, it was widely held that a radical overhaul of global economics was needed. Some countries are undoubtedly held back within the Bank, but generally it strives for democracy at every turn.